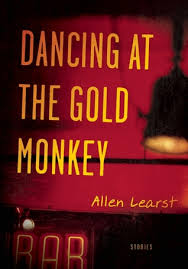 Allen Learst served in Vietnam as a combat infantryman in the 101st Airborne Division. At eighteen, he went to work at a Chrysler tank plant, and after coming home from the war worked in a series of blue-collar jobs. Later he received a PhD in creative writing from Oklahoma State University.

Learst’s Dancing at the Gold Monkey (Leapfrog Press, 130 pp., $14.95, paper) is a collection of eleven linked short stories. I kept thinking: Couldn’t he have come up with just one more story to make it an even dozen?

There is nothing in the book indicating where—or if—these stories have been previously published in magazines or elsewhere. I assume they have not been. The Library of Congress information in the front of the book notes that its subject headings are:  “1. Vietnam War, 1961-1975-Veterans-Fiction, 2.  Psychological fiction.”  I know what subject heading No. 1 means, but I am not sure about the second one.

I read this little book of short stories carefully, looking for evidence of the Vietnam War, and found plenty in most of them. In the first story, “Under Ice,” I did not find any Vietnam War influences. I saw this as a disrupted family story.

In story two, “A Kiss,” I found important Vietnam War elements. Kodoski is a Vietnam War veteran who alludes to a .45 going off in a hootch in “Phu Bai, almost killing Micky.”  Kodoski is missing an arm that throbs “like it did the night he left it in a foxhole when the NVA ran over Firebase Henderson.”  Right after that the reader encounters “Orange Vietnam sunset,” and then “Blue South China Sea.”  Kodoski ends up on a hospital ship in Cam Rahn Bay.

The third story, “A Street, a Clothesline, a Bed,” is dated August 15, 1970. It starts off in Vietnam with a green patch floating in the South China Sea, which becomes the parachute-wrapped body of a dead fighter pilot named Robert Spendlove. In the fourth story, “Places Part Dream,” we find out more about Bobby Spendlove and his back story. And so it goes throughout the rest of the remaining seven stories.

I could continue to summarize each of the remaining seven stories as though I were writing a term paper for an English class, delineating and describing the Vietnam War connections Learst—who is a senior lecturer at the University of Wisconsin, Marinette—has embedded in each one. I will not do that.

I will say that each remaining story has significant Vietnam War elements, especially, “Point Man.”  As a dog lover, I’ll also mention an excellent and unusual dog story, “Animoosh.” There is death in this story, but I was happy that the dog was alive and well at the end of the tale, despite nearly drowning in a fast-flowing torrent of a river.

These complex stories and their recurring characters weave together and tell a spellbinding story that feels more like a novel. The writing is always riveting and sometimes reads more like poetry than prose.

A reader will find out a lot more about Kodoski, Micky, Firebase Henderson, and Bobby Spendlove in the remaining stories, which are gritty as they grapple with elemental passions and all the varied and complex aspects of war—past, present, and internal.

This small book packs a powerful psychological punch. I highly recommend it to readers who think they have seen it all where Vietnam War literature is concerned. They have not.