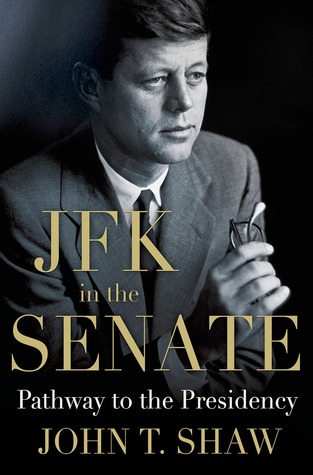 John T. Shaw ‘s JFK in the Senate: Pathway to the Presidency (Palgrave Macmillan, 228 pp., $26) is a well-written, pioneering look at President John F. Kennedy’s 1953-60 tenure as the junior U.S. Senator from Massachusetts. JFK’s time in the Senate, Shaw says, “was a period of remarkable personal and political growth in which an untested backbencher transformed himself into a man of substance and depth and a victorious presidential candidate.”

Kennedy “participated actively and sometimes boldly” during his time in the Senate “in the central policy debates of his time,” Shaw notes. On the international scene Kennedy spoke his mind on “the challenges posed by China and the Soviet Union, the icy armistice in Korea, France’s faltering military interventions in Vietnam and Algeria” and “the appropriate defense posture for America during the Cold War.”

Kennedy had visited Vietnam as a Congressman in 1951 as part of a big fact-finding mission to Asia and the Middle East. The French at the time were enmeshed in a bitter war against communist insurgents led by Ho Chi Minh and Vo Nguyen Giap determined to shed the yoke of colonialism. After meeting with high-level French and U.S. military and political figures, JFK came away with a decidedly negative view of the situation.

Because of the strong American support for the French in their war against the Vietminh, Kennedy wrote in his journal, the United States was “more and more becoming colonists in the minds of the people.”

Kennedy stressed in a subsequent radio address that he strongly favored “check[ing] the southern drive of communism,” in Vietnam. But he stressed he did not want to do that relying “on the force of arms.” Rather, Kennedy called for building “strong native non-communist sentiment within these areas.”

In his first year in the Senate, Kennedy “took center stage” in the debate over whether or not the U.S. should continue to support the French, Shaw says. JFK spoke out in favor of sending U.S. aid, but also called on France to grant independence to Vietnam, Laos, and Cambodia. He even offered an amendment to the Senate foreign aid bill urging France to give more independence to those colonies. It was defeated.

Before the French defeat at Dien Bien Phu in May 1954, JFK gave a Senate speech in which he warned that if the United States took over from the French militarily, the subsequent war would “threaten the survival of civilization.” He then spoke out against the U.S. pouring “money, materiel, and men into the jungles of Indochina without at least a remote prospect of victory,” something, that “would be dangerously futile and self-destructive.”

Kennedy, in his search for a non-military solution to the problem of stopping communism in Vietnam, believed that Ngo Dinh Diem, the vehement anticommunist the CIA helped install as South Vietnam’s premier in 1954, would be the leader who could do so. JFK “began to speak of a ‘Diem miracle in South Vietnam,'” Shaw notes, “and urged American backing for his regime. He accepted, as did other American leaders, Diem’s decision not to go forward with national elections in 1956 as had been promised” in the Geneva Accords.

In a June 1, 1956, speech in Washington before the pro-Diem American Friends of Vietnam, JFK changed his stance on what America should do to support Diem. He no longer warned that the U.S. should not get heavily involved militarily in the effort to stop the Vietnamese communists, framing his argument in staunch, 1950s Cold War rhetoric.

Vietnam, he said, “represents the cornerstone of the Free World in Southeast Asia,” JFK said, “the keystone in the arch, the finger in the dyke.” South Vietnam, he said, “is our offspring. We cannot abandon it.”

Kennedy continued his strong support of Diem through his days in the Senate and into his 1,000 days in the White House. Calling South Vietnam “a brave little state,” in a 1960 speech, JFK said that nation was “working in a friendly and free association with the United States, whose economic and military aid has, in conditions of independence, proved to be effective.”

Shaw does not address the oft-debated issue of whether JFK would have withdrawn American troops from Vietnam had he lived. But Shaw does show that during his eight years in the Senate, Kennedy changed his thinking radically on what the U.S. should do to keep South Vietnam from falling to the communists. He went from strongly advocating no American military action in South Vietnam to forcefully calling for strong American aid—including sending in thousands of military advisers—to try to help that country fight the communist insurgency.