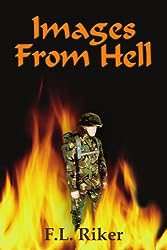 F. L. Riker was just like many Americans who served his country during the Vietnam War. He returned to “an unfriendly country” where he suffered from PTSD, as Riker puts it in Images from Hell (AuthorHouse, 84 pp., $11.45, paperback), a collection of his poetry.

No details of Riker’s service are given in the book, but this small volume contains after action reports, one of which deals with a battle that took place in Vietnam on April 11, 1968, that involved the 3rd Battalion, 22nd Infantry of the 25th Infantry Division. The base camp of the unit involved in that battle was Dau Tieng. Many died in that battle and the reports contain a long list of weapons and equipment recovered from the enemy, hundreds of whom died.

I assume that this battle and others like it fueled the poetry in this book. But we are not told that straight out.

This book contains a few dozen poems with titles such as “Savage Country,” “A Victim,”  “Death of a Captive,” “The Fear Inside,” “Angels Above,” and “One Way Out.”

Typical of Riker’s brief poems about the effect of the war on him is  “Duration.”

In these close dark spaces of my mind

I feel the deepening horror,

Torture me throughout my whole,

In this dreadful while of time

I’ll now spend with the devil in my soul

Never ending hell is all that’s left for me

Nothing left of the world I knew

Images of Hell takes its place among other collections of poems about how the Vietnam War has taken a toll on the soul. I recommend it to young people who are considering joining the military. It will provide food for thought and reflection.