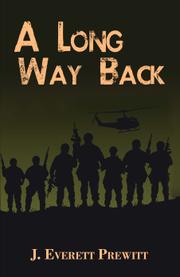 J. Everett Prewitt was drafted into the Army, completed Officer Candidate School, and served in a supply battalion in Vietnam from 1968-69. He’s the author of the novel, Snake Walkers (2005).

The Introduction to his fine novel, A Long Way Back (CreateSpace, 388 pp. $16.99, paper; $6.99, Kindle), Prewitt sums up what takes place between the covers: “Anthony Andrews, a reporter for the Washington Post, watches as a group of bedraggled black soldiers believed to be missing or killed in action mysteriously reappear in Cu Chi, Vietnam, in 1969.  Andrews uncovers an Army conspiracy to conceal a story of soldiers ill-prepared for battle, yet sent on an illegal mission and not expected to return.”

The author thanks the late Vietnam War correspondent Wallace Terry (the author of Bloods) for the help he provided. This novel takes an important place on the small shelf of African-American Vietnam War novels.

When Andrews arrives in Saigon on June 25, 1969, he’s assaulted by the sewer smell and the blast furnace heat, the first two things mentioned in most Vietnam War memoirs and novels. He’s there to write for the Post about the positive experiences of black troops. Experiences like that are thin on the ground at that time and place.

The men sent off to Cambodia on an illegal mission are clerks, cooks, truck drivers, and other support troops. There is one warrior in their midst, a sergeant who tries his hardest to give them a crash course in how to survive against the enemy. These rear echelon soldiers were sent on a mission they were told would take three days. They were in the field for eleven days.

The section of the book that deals with their attempts to become field soldiers is very strong and hit home with me, a Vietnam veteran who is glad he was never sent away from his typewriter at USARV Headquarters and into Cambodia.

The book contains some of the usual stuff of in-country Vietnam War novels: returning soldiers being called baby killers and being spat upon; cold ham and lima beans C-rations; Vietnam being a stink hole of a country. But this book avoids going overboard with such images.

These black soldiers acquit themselves pretty well in Cambodia. It turns out that they were sent there with a one-way ticket because they were considered troublemakers. In part, this novel reads like an homage to Going After Cacciato, as the men wander in Cambodia encountering troubles they are ill prepared for.

At some point, one of them thinks, “And with all the firepower in America’s possession, we can’t defeat a small, backward country like Vietnam? Was it some Supreme Being’s way of telling us we shouldn’t be there?” Good question.

The seven black soldiers who make it back alive are given other-than-honorable discharges and sent home in disgrace. They try to settle into life in the United States and forget about their Cambodian adventure. Andrews, being an intrepid reporter, does not allow this to happen. He keeps pestering away, trying to get to the bottom of what was done to these men.

I won’t give away the ending, but I will say that the book is well worth reading, as these African American soldiers get treated better than most did in real life.