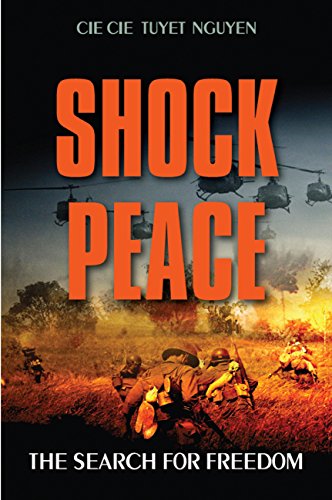 Ciecie Tuyet Nguyen was thirteen years old when she witnessed the events she bases her novel, Shock Peace: The Search for Freedom (Tate, 444 pp., $39.99, hardcover; $30.99, paper; $14.99, Kindle), on. Through the character of Trinh, she relives her memories of communist takeover of Saigon in 1975.

Why the author chose the title she did is a mystery to me. Reading the title, I figured that the novel would not be written in good English because the title makes little sense. But I was wrong; the novel is quite well written. There is the occasional jarring phrase such as “fresh as a cucumber” rather rather than “cool as a cucumber.”

A much better title would have been The Fall of Saigon through the Eyes of a Survivor.

Ciecie Nguyen continued to live in Saigon after April 1975 until her escape by boat to Australia with her family. Her mother arranged the escape and was the source of the family’s great strength through the horrors of the three years it took to get together the money and supplies necessary to leave Vietnam.

I’ve read many books about the so-called boat people and their brave attempts to get out of communist Vietnam, but none tells the story better than this novel. Nguyen reveals the barbarism of the North Vietnamese toward the South Vietnamese with an immediacy that hit home in a way that it never did before to me.

We get to know all the people involved in the escape, and we care about them and want them to get away from the horrors that have been brought down on them. They do make it and we learn about their lives after their escape.

Learning English is the biggest challenge for the Vietnamese once they learn the social customs of Australia. There is a funny section in which the refuges struggle to figure out why the Australians who live above them are so angry at them when they cook their dinner.

For some reason, the Australians hate the smell of the fish sauce and the garlic. They terrorize the Vietnamese by screaming at them and pounding on their door when they cook. Of course, the refugees have no idea what they are doing wrong. And there is nobody to tell them.

The author graduated from pharmacy school and now owns her own pharmacy in the western suburbs of Sydney. My respect for the authors’ academic and career successes is huge.