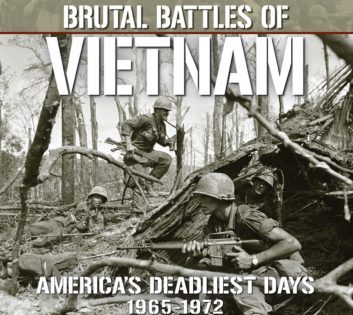 Richard K. Kolb, the recently retired long-time publisher and editor-in-chief of VFW magazine, has spent more than a decade preparing the newly published Brutal Battles of Vietnam: America’s Deadliest Days, 1965-1972 (VWF, 480 pp., $29.95). This worthy book is the fruit of Kolb’s research, writing, and editing of a long-running series in his magazine called “Vietnam’s Deadliest Battles.”

Brutal Battles is a reader-friendly, heavily illustrated coffee-table-sized tome that, as Kolb puts it, stands as “the first and only” book that presents “a comprehensive U.S. battle history of Vietnam in a single volume.” Kolb and his team of writers (including the noted Vietnam War specialists Al Hemingway and Keith Nolan) do not deal with politics at home, geopolitics, the antiwar movement, life in the rear, diplomacy, strategy, accounts of the ARVN (or NVA or VC)—or any kind of in-depth analysis of tactics. In other words, as Kolb puts it, the book “is not Vietnam 101.”

Instead, Brutal Battles is a compelling, well-written compilation of on-the-mark reports on dozens of Vietnam War engagements that ended in significant casualties. In other words, that is, the deadliest, most brutal, of the war’s all-out battles and other engagements.

Each one gets a relatively short but meaty chapter told from the point of view of the Americans who did the fighting. We get the voices of everyday troops who fought in the battles, along with cogent descriptions of what took place, as well as tributes to those who perished and those who performed courageously under fire.

Rich Kolb, who served in Vietnam with the Army’s 4th Infantry and 101st Airborne Divisions in 1970-71, shaped the magazine series and the book to include actions involving every American infantry division, independent infantry brigade, and separate regiment that took part in the war. They are presented chronologically through 1972.

What follows is a section on Navy and Air Force engagements. Then comes a tribute to the war’s most highly decorated troops and statistical info, including a 1959-72 combat chronology.

For purchasing info, go to the VFW store.