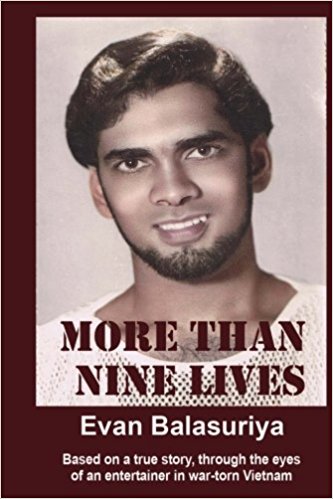 In More Than Nine Lives (CreateSpace, 208 pp. $24.95, hardcover; $19.95 paper ), Evan Balasuriya writes about narrow escapes from death early in his life. That theme reaches a crescendo during the 1968 Tet Offensive when his band—Savages—is in the middle of a tour entertaining American troops in South Vietnam.

Savages consisted of four men (three guitar players and a drummer) and three women (a lead singer and two go-go dancers) mainly from Sri Lanka where they were one of the country’s most popular rock bands. The group had more than nine lives, Balasuriya, notes, having cheated “death more than eleven times and perform[ed] for nearly 500,000 U.S. soldiers” during thirteen long months in-country.

Their brushes with death included rocket attacks; their van coming under small arms fire; confrontations with drunken ARVN, Korean, and American sexual predators; and speeding along narrow roads in the blackness of night in the middle of nowhere. Balasuriya plays each event for all it is worth. He personalizes a stray bullet that hits a wall near him, for example, by saying, “Yet again, I had cheated death.”

Balasuriya builds a background for the Vietnam War scenes by recalling growing up in Sri Lanka. For me, this was the most interesting part of his memoir.

Born in 1942, he describes a near-drowning and a near-emasculating bicycle accident, along with other threats to his life. The son of a doctor who worked in government hospitals, he grew up with six siblings. He labels his Catholic parents as “upper middle class,” but they had servants and their children attended boarding schools. In high school, Balasuriya excelled as a soccer goalie, captaining his team to a national championship.

Despite being his father’s scapegoat for misdeeds by the children, Balasuriya developed a strong personality and sense of responsibility without harboring resentment. Consequently, he displayed excellent leadership at critical times, especially in Vietnam.

In keeping with a privileged upbringing, Balasuriya’s thinking reflects puritanical standards. His observations on love, sex, war, prostitution, and other controversial topics reveal a righteous state of mind that led him to face physical danger to protect the women in his band and to stand up to bullies.

For Balasuriya, going to Vietnam resembled a leap to another planet. It was his first trip outside Sri Lanka and his first airplane ride. He had no knowledge about the war or its purpose. To him, everything in Vietnam portended danger.

Like the other members of Savages, Balasuriya delighted in entertaining enlisted men, NCOs, and officers with separate performances in a given day. Savages played some 750 concerts.

Similar to other Asian bands, Savages mimicked performers such as the Beatles and Rolling Stones. Balasuriya mentions nearly every song Savages played for the troops, which should trigger at least a few memories for Vietnam War veterans.

The book contains about a hundred photographs he took. Many are small or dark. But they all provide evidence of an unusual year for a remarkable leader and his group.

Balasuriya migrated to the United States in 1973. For years, he operated a nationally renowned restaurant in Minneapolis. In 2005, he founded an organization that built houses for Sri Lanka tsunami victims.