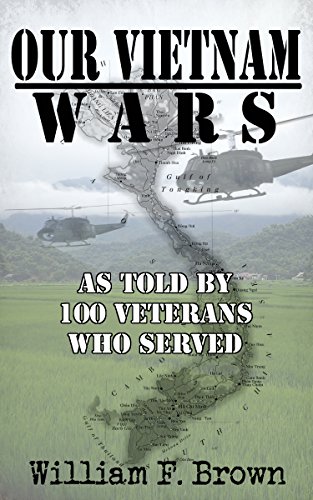 Back in the sixties, Andy Warhol announced, “In the future everybody will be world famous for fifteen minutes.” William F. Brown helps to fulfill that dictum with Our Vietnam Wars: As Told by 100 Veterans Who Served (Booknook, 344 pp. $14.49, paper; $4.99, Kindle).

The book contains three- or four-page biographies of one hundred men and women who served in Vietnam from 1955-75. The people in the book represent a cross-section of services and duties. Even a couple of Aussies made it into the mix, which is composed predominantly of former enlisted personnel. Presented chronologically, many of the stories and photographs reveal short looks at the big picture, which provide historical dimension along with details of each person’s time in-country.

Otherwise, the biographies focus on the duties of each veteran. Brown has nicely edited diatribes against war-time miseries such a burning shit and subsisting on C-rations. He emphasizes common hardships just enough to paint a scene.

With that format, Brown presents a history lesson for “our children and grandchildren” who “know so little about that place.”

“I don’t believe there was a single vet I interviewed who doesn’t think the war was a monstrous mistake,” he says, made by U.S. presidents and politicians.

Many of the interviewees now suffer from the debilitating effects of exposure to Agent Orange but most have received adequate medical treatment.

Contemplating a second volume of Our Vietnam Wars, Brown closes by saying: “If you are a Vietnam Vet and would like me to add your story to our narrative, send me an email at Billthursday1@gmail.com and I’ll be in touch.”