A two-year draftee, Larry Kuykendall excelled in training and went to Vietnam as an Army staff sergeant where he lead a platoon of other draftees during his 1969-70 tour of duty. Kuykendall’s memoir, Grunt: A Tale of Men and War (BookLocker, 230 pp. $15.95, paper) tells the story of his life with the 3rd Brigade, 22nd Regiment of the 25th Infantry Division operating mainly out of Fire Support Base Washington near Tay Ninh in III Corps.

Kuykendall touches on many topics recorded in other Vietnam War memoirs. For example, he discusses alcohol and drug use among his men, race relations, fear, close calls with death, and death itself. He describes monsoon rains, heat, hydration, and off-duty interactions with Vietnamese civilians beyond the wire.

Interspersed with this common knowledge, however, Kuykendall also teaches the leadership lessons he learned as he led a constantly undermanned platoon of twelve-to-twenty men. Sergeants led all platoons in his Delta Company, as his company commander determined that newly minted lieutenants were incompetent.

Honesty and fairness comprise the core of Kuykendall’s leadership philosophy. Furthermore, he believed that mission ranked secondary to safety. He made sure that his men understood those beliefs. As a result, Kuydendall lost only one man, and he was hit by friendly fire. Still, he writes, “every third man would be wounded in some way,” including himself.

The best lesson Kuykendall learned was to distrust authority. Decisions of officers under whom he served convinced him that authority was motivated by its own agenda for personal success, a conclusion he held fast for decades after the war.

By recreating two major operations involving his company, Kuykendall shows the great distance between the goals of upper-echelon Army officers and grunts. He led his platoon on a deployment up Black Virgin Mountain and in the invasion into Cambodia in 1970. Planners for each operation had minimal understanding of the situations. The results were exercises in futility, he says. In both cases, the NVA chose not to fight because its leaders envisioned an end to the war, which U.S. Army leaders refused to consider.

Nevertheless, Kuykendall projects a broad cultural personality that enlivens his story telling. He separates right from wrong and communicates his beliefs logically. 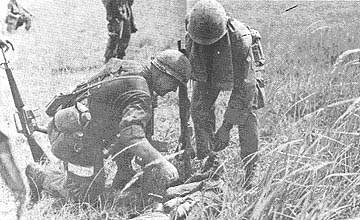 I believe that Larry Kuykendall should have titled his book Coping in a World of Disillusionment. He begins with a twelve-page preface that is an editorial denouncing America’s obsession with maintaining a strong military and employing it to support worldwide wars. Throughout the book, much shorter commentaries offer similar arguments.

Although Grunt repeats information covered in many other Vietnam War veteran memoirs, Kuykendall provides a fresh, front-row view of how a platoon of two-year draftees survived in a war with a questionable purpose.