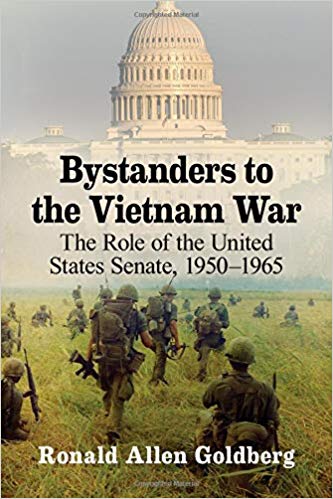 Ronald Allen Goldberg’s Bystanders to the Vietnam War: The Role of the United States Senate, 1950-1965 (McFarland, 159 pp., $35, paper; $18.99, Kindle) provides a foundation of diplomatic and political history to understand how and why Americans came to a tipping point in committing to military intervention in the Vietnam War. It might easily fit on a reading list for a college survey course or seminar on the war.

Under the Constitution, presidents provide leadership in foreign relations and serve as the military’s commanders-in-chief. Congress holds the purse strings. Presidential decisions cannot occur in a vacuum; they depend on legislative support and that of voters. The key issue is whether support comes before or after actions are taken and to what degree. That was true in the 1800s and continues to be the case today.

Goldberg’s main point in Bystanders to the Vietnam War is that the U.S. Senate should play a more forceful role in shaping foreign policy and decisions that lead to war. Implicit in that is a desire for better outcomes, as well greater accountability. However, few decisions in life are perfect. Most involve risk, some with deeply tragic stakes. Outcomes are rarely guaranteed and there often are unforeseen consequences.

Goldberg, a retired Thomas Nelson Community College history professor, reveals the decision-making process that led to U.S. involvement in the Vietnam War. But he often seems to contradict his thesis that the Senate was a bystander. He describes forty 40 different Senators speaking out about the war, some repeatedly, pro and con, from 1950-65. 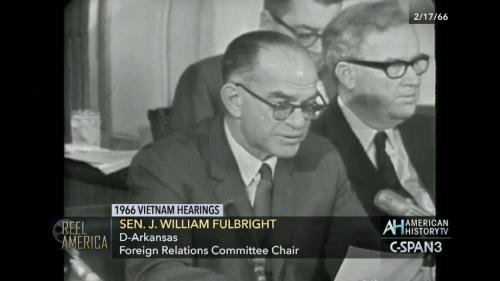 President Eisenhower, particularly, was influenced by Senate opinion.  At various points, individual Senators also offered amendments to appropriations, legislation or resolutions which, even when dropped or defeated, created pressure for consensus—either through clarification or as often is the case, deliberate vagueness.  Goldberg seems to want clearer votes, coming sooner in a shared decision-making process. It is a laudable hope, but probably unrealistic and in some cases possibly unwise.

It is of course disillusioning to realize that presidents, senators, and institutions in making decisions often move forward uncertainly, incrementally, frequently without complete information—or worse, blindly or impetuously, based on mis-assumptions, misinformation, or lies. The point of Goldberg’s work is to warn that such risks remain grave concerns today.

A shortcoming in Goldberg’s book is that except for top leaders, he does not identify most of the Senators he quotes by their states, party, or membership on key committees. Such basic information is still relevant to consider what factors may have influenced the Senators.

Under Eisenhower, while also holding the Senate majority, Republicans generally were the more moderate, dovish voices; Democrats the more hawkish ones. After Democrats took back the Senate in landslide 1958 midterm elections, and narrowly the presidency in 1960, Republicans became the more hawkish party. Goldberg does not bring into sharp relief the historical significance of the 1958 elections, and to a much lesser degree, those in 1962.

President Kennedy greatly increased military advisers and aid to South Vietnam, while the Senate, Goldberg writes, limited itself to “comments of caution, confusion and sometimes outrage.” But Kennedy also was cautious, uncertain, and sometimes outraged. In September 1963, in response to South Vietnam president Ngo Dinh Diem’s corruption and violent oppression of Buddhist opponents, Kennedy publicly denounced the Saigon government for having “gotten out of touch with the people.” Soon after, the Senate passed a resolution stating that American aid should be stopped and advisers withdrawn if reforms did not occur.

On November 2, 1963, Diem was assassinated and replaced by a military junta. Three weeks later, Kenned was assassinated. It is impossible to know what direction he would have taken had he lived and won-re-election in 1964, but Goldberg neatly summarizes arguments and evidence that like Eisenhower, JFK probably would have refused to intervene with American combat troops.

President Johnson was a different breed. First elected to Congress in 1937 one of the defining lessons of World War II for his generation was the risk of appeasement. A fierce anti-Communist, he was a great believer in his force of personality, as well as unilateral American action on the world stage. He was more inclined—and able–to bend Congress to his will, particularly after winning the 1964 presidential election by a landslide.

At Johnson’s request, Congress adopted the Tonkin Gulf Resolution in August 1964 in response to two American naval incidents with North Vietnam. Coming before the election, the resolution approved “all necessary measures to repel any armed attack against the forces of the United States and to prevent further aggression.” It was essentially a blank check for American military intervention in Vietnam. 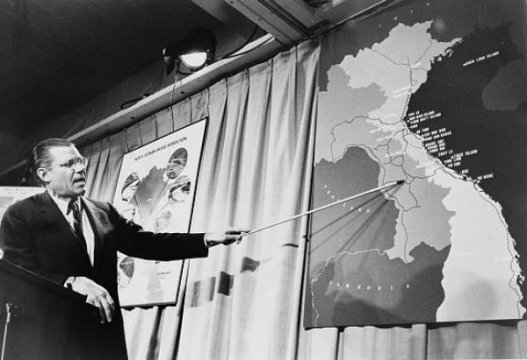 The Senate Foreign Relations Committee hearing on the resolution lasted one hour and 40 minutes. Overall, committee hearings, debate and voting in both the Senate and House of Representatives totaled less than nine hours. The House passed it unanimously.  The Senate vote was 88-2.  One Democrat and one Republican voted against it.

The 1964 Republican presidential candidate, Sen. Barry Goldwater of Arizona, had run as a fierce war hawk. By comparison, the Republican Party enabled Johnson to run as “the peace candidate,” while the Tonkin Gulf Resolution allowed him to maintain a position of strength, an olive branch in one hand, but with arrows in another.

Although not covered by Goldberg’s study, the Democratic Party which began the escalation, would split apart because of the war. Democratic Senators would challenge Johnson for the party’s presidential nomination in 1968, contributing to, if not forcing,  his decision not to run for re-election.

Republican Richard Nixon won the presidency pledging “peace with honor,” but the Democratic majorities in Congress would still be responsible for ultimately for ending the war—albeit with considerable Republican support.

Nixon resigned in August 1974. Four months later, North Vietnam violated the 1973 peace agreement, and rapidly began overrunning the South. President Gerald Ford requested renewed military assistance that Nixon had promised South Vietnam in the event of resumption of the war. Congress voted against it by a wide margin. On April 30, 1975, the Vietnamese communists took Saigon and the South Vietnamese government surrendered unconditionally.