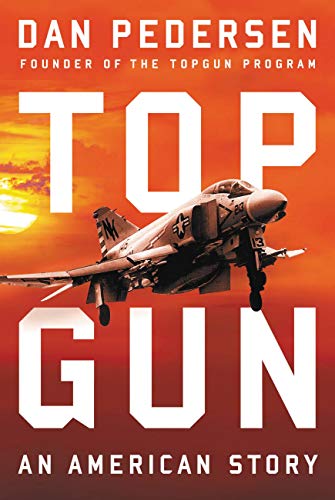 Selected to create an advanced training program for U.S. Navy fighter pilots, Dan Pedersen operated in accordance with an afterthought from his commander: “Don’t kill anybody, and don’t lose an airplane.” Otherwise, Pedersen was on his own.

In his memoir, Topgun: An American Story (Hachette, 320 pp. $28, hardcover and Kindle; $35, audiobook), Pederson tells how as a lieutenant commander in 1969 he handpicked eight highly experienced F-4 Phantom crewmen—four pilots and four backseaters—to develop the program.

First, they named it “Topgun.” Then, after analyzing the combat capability of the F-4 Phantom “well beyond the parameters set by McDonnell Douglas,” they designed a curriculum that taught crew members how to use the airplane and its armament to become “the best sticks in the sky,” as Pedersen puts it. They also taught their students “how to teach other pilots” the same skills.

In measuring their success, the facts speak for themselves. From the beginning of Topgun to the end of the Vietnam War, the Navy kill ratio against MiGs was 24:1. Its ratio for the entire war was 12:1, but that was still far better than USAF’s overall ratio, Pedersen says.

The intensity of Pedersen’s commitment to perfecting aerial combat skills makes this book exceptionally interesting. He shares his learning experience. Living to dogfight, he flew any plane available at every opportunity. Part of Topgun’s success was due to his access to Area 51 (the highly classified section of Edwards AFB in Nevada) to fly MiGs that the U.S. government had acquired clandestinely.

Although flying took precedence over everything else in his life, that characteristic did not diminish Pedersen’s worth as a compassionate leader. In the book he frequently memorializes friends killed in combat or accidents. He also hero-worships flyers from World War II and the Korean War.

He concedes that death waits only one mistake away and says, “When you’re a fighter pilot, alone in that cockpit, your fate is in your hands.”

Prior to his Topgun assignment, Pedersen flew F-4s from the U.S.S. Enterprise on Yankee Station off the coast of Vietnam in 1968. He describes sorties that provided close air support in South Vietnam, day and night interdiction of traffic in Laos, and strategic bombing of targets in North Vietnam. Repetitive and unproductive targeting dictated by Washington created discontent among Navy flyers, particularly when losses multiplied, he says.

In 1973, Pedersen flew a shorter second tour from the Enterprise, bombing trucks in Laos after the Paris Agreement halted U.S. combat action in South Vietnam.

Along with him telling of the creation of Topgun, Pedersen also recalls historic world events and personal trials and tribulations as they relate to flying:

Plus, buried among these spellbinding recollections, there’s a love story with a happy ending.

Aficionados of F-4 operations might find enlightenment in comparing Pedersen’s Navy views with those of USAF pilot Gaillard R. Peck, Jr. in his new book, Sherman Lead: Flying the F-4D Phantom II in Vietnam. Both books cover the same times and events.

Pedersen’s memoir left me disappointed (not quite to his depth, of course) that he never shot down a MiG. At the same time, I envied his powerful influence on improving the combat skills of so many flyers.

In my eyes, a great teacher is a great man.