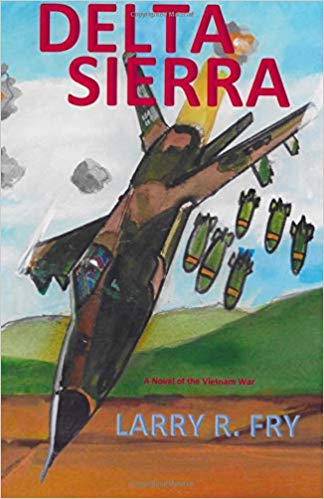 Delta Sierra: A Novel of the Vietnam War (CreateSpace, 410 pp., $19, paper) is Larry R. Fry’s first novel, but he sharpened his skills having written two nonfiction books dealing with family history, a textbook on computer programming, and Cowboys and War, a worthy book of poetry.

Delta Sierra is described as “a novel of air combat over North Vietnam.” It concentrates on the price paid by the men who flew those missions. Gary Bishop Deale, the novel’s protagonist, flies daily bombing missions over North Vietnam and Laos.

The point is made that both of these countries are heavily defended by modern weapons supplied by Russia and China. So in a sense, he is at war with Russia and China, but this fact is not confronted.

While Gary is fighting this war, his wife, Allison Faith Deale, is in graduate school in North Carolina working in a marine lab. She is aware of the dangers that Gary faces on a daily basis and tries to wait patiently for his return—if that happens.

The novel deals with real events, such as what happened to Col. Jack Broughton when he stood up for his men in an incident that should not have led to his being punished. Broughton is the author of Thud Ridge, a classic 1969 memoir about air combat in the Vietnam War.  That is still the book to read for information on this subject.

Delta Sierra covers the same territory. I recommend it highly to those who cannot get enough of this subject.  It’s written in short chapters and is easily enjoyed in short bursts.