Cathy Saint John’s One for the Boys: The Poignant and Heartbreaking True Story of SGT John W. Blake, a Newfoundlander from Canada who Volunteered and Served in the Vietnam War (Sinjin Publishing, 457 pp. $22.95, hardcover; $9.95, Kindle) is a tribute to the author’s brother, John W. Blake, who joined the U.S. Army and served eighteen months in the Vietnam War.

The book is made up of five main parts, each of which could stand on its own. The first covers Blake’s time in the Vietnam war, from January 1970 to August 1971. Serving with the 173rd Airborne Brigade, Sgt. Blake received a Bronze Star and suffered wounds from grenade shrapnel three different times.

Using her brother’s journals, Saint John says he “witnessed atrocities that were horrid, criminal behaviors and actions completely against his training as a soldier and as a human being that shocked him to his inner core.”

Blake estimated that he took part in 70-100 incidents in which he had a high probability of being killed, and that at least fifteen of his buddies were killed in combat. He also wrote of experiencing “airport assaults from protesters” when he returned home.

Once Blake was in Canada, he wouldn’t speak to family about his war experiences, though his sister writes that it quickly became clear he had “died spiritually and emotionally in Southeast Asia.”

Blake moved to the United States in 1976 thinking he would find more “understanding and acceptance” here than he had in Canada. He also hoped to find some meaning from his war experiences.

The book’s second part deals with John Blake’s seven-month solo walk across the United States to draw attention to the service of Vietnam War veterans. He wore out six pairs of boots walking in uniform and carrying an American flag from Washington state to Washington D.C.

That 3,200-mile trek was planned to coincide with the November 1982 dedication of the Vietnam Veterans Memorial. He called his the walk, “Mission at Home 1982, One for the Boys.” He also described it as his “long journey home.”

The third part describes Blake doing volunteer work as an advocate for Vietnam War veterans that ends with him fighting his own losing battle with PTSD. He took his own life in 1996. A note he left behind said, in part, “I’ve always been wondering where the boys went—I think I’ll go looking for them now.” 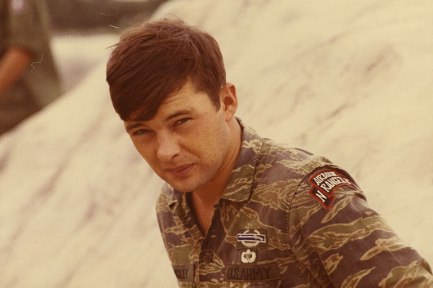 The fourth section of the book covers his family’s five-year struggle to have his cremated remains accepted for burial in a military cemetery in Newfoundland. The final part describes Saint John communicating with, and meeting several, of the men who had served alongside her brother in Vietnam.

John Blake often expressed his feelings through poetry and hoped someday to write a book about his experiences. The task ended up falling to his younger sister. She has served him well.

Cathy Saint John wrote this book for family members too young to have known John Blake. It also serves, more generally, as an exploration of the general causes and effects of post-traumatic stress disorder.