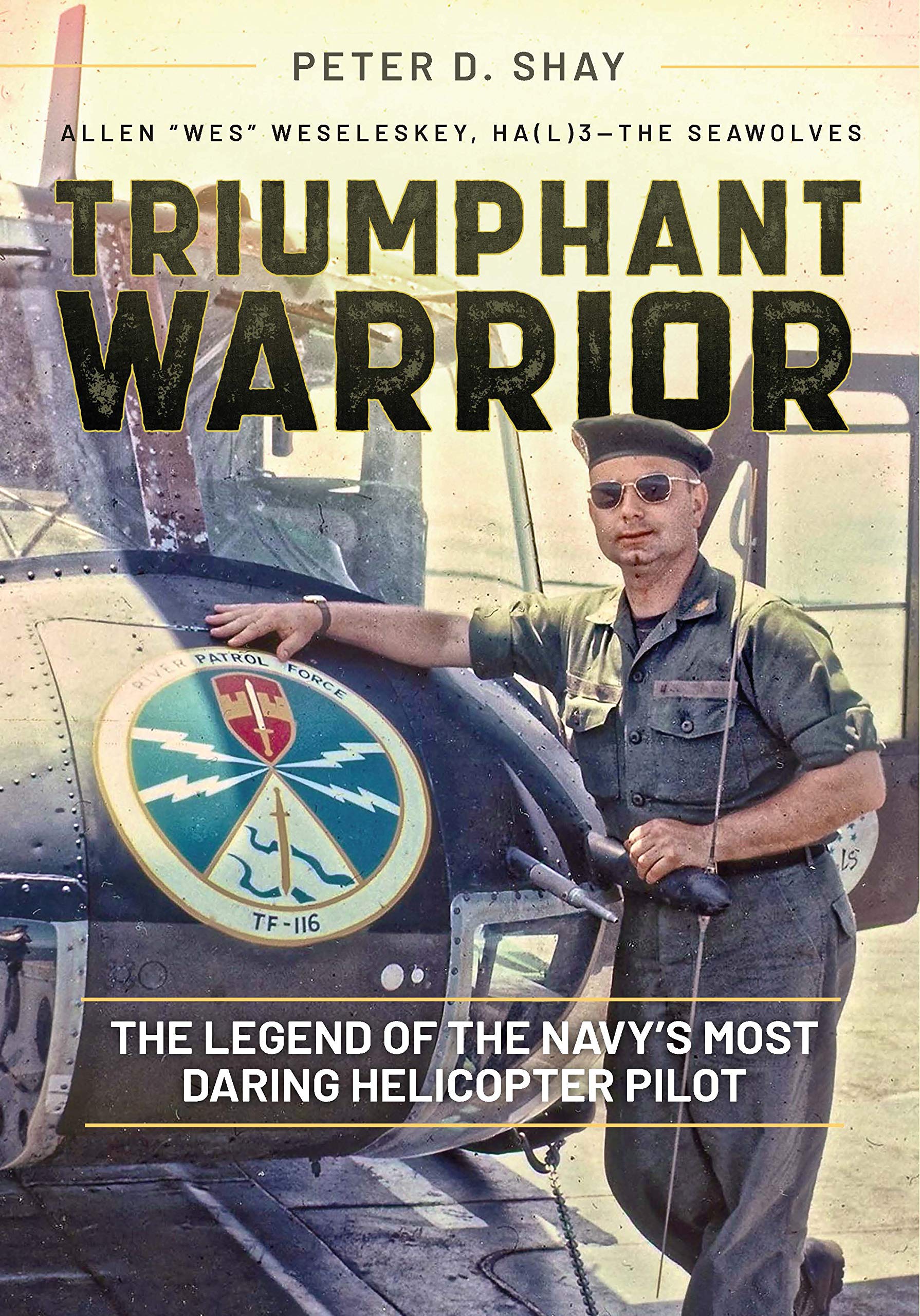 In 1966, the United States Navy begged eight battle-weary UH-1B gunship helicopters from the U.S. Army. They re-named them Helicopter Attack (Light) Squadron Three Seawolves; shipped them to Vinh Long in Vietnam; and thereby established air support for inland riverine operations of the Navy’s fiberglass-hulled Patrol Boat River fleet. When CDR Robert W. Spencer arrived at his headquarters in Vung Tau to lead the Seawolves, no other Navy officer was assigned there, so he essentially reported to himself.

Peter D. Shay tells that story as a departure point in Triumphant Warrior: The Legend of the Navy’s Most Daring Helicopter Pilot (Casemate, 240 pp. $32.95, hardcover; $17.99, Kindle). In it, he provides the history of HA(L)3 and glorifies the exploits of LCDR Allen E. “Wes” Weseleskey.

Back then, Shay flew with the Seawolves. Today, he specializes in putting together Vietnam War-era oral histories for the Naval Historical Center. An avid researcher, he conducted nearly fifty interviews with former squadron mates for Triumphant Warrior.

Shay’s narrative jumps from person to person but still develops personalities. Every man is vitally alive on these pages, often with death nearby. Similarly, he jumps from event to event without missing a beat. He grabs your attention and does not let go.

Shay describes the difficulties inherent in organizing a new squadron to perform a specialized task. He provides lessons in how to—or perhaps how not to—organize and run a war. The unit suffered growing pains from too much enthusiasm with too little experience, which caused avoidable crashes, accidents, and fires. Along with detailing the demands of the unit’s task, Shay tells the story of Weseleskey.

Practically upon arrival in HA(L)3, Weseleskey was awarded two Distinguished Flying Crosses for a couple of gutsy close support missions. Then he pre-empted his commander’s authority, lost his slot, and was exiled to a desk, even though his misstep improved the squadron’s combat capability.

After two months of processing paperwork, Weseleskey returned to the cockpit as an assistant OIC. He focused on improving the combat skills of the unit’s least-experienced pilots until the Viet Cong attacked Vinh Long at the start of the 1968 Tet Offensive.

Shay recalls long-ago events as if they happened yesterday, which adds a sense of urgency to his writing. He recreates the 1968 Tet Offensive as if he is still surprised by it. Most revealingly, he provides a list of high-ranking leaders who daydreamed or actually slept through the January 31 Tet kickoff.

Both Navy and Army helicopters operated from Vinh Long, so pilots and crewmen turned into infantrymen when the Viet Cong overran the airfield. Shay describes the attack using the recollections of dozens of people, including the NVA general who led the Viet Cong. His cross-section of memories produces a lucid picture of the frantic pace of the fighting.

Weseleskey led the action on the ground and also flew forty-six missions during the next two weeks. His ultimate heroics, though, came a month later while flying support for surrounded ARVN troops and rescuing two wounded Army Ranger advisers and a wounded ARVN soldier.

To pick up the three men, Weseleskey performed flying feats that violated most of his squadron commander’s restrictions. Subsequently, the commander placed Weseleskey under arrest and threatened him with a court martial. Shay’s description of the action and its aftermath provides a wealth of information for arguments about judgment, leadership, and awards.

Eventually, Weseleskey received the Navy Cross. He retired as a captain after thirty years of service. In the book, Shay keeps the discussion alive—forever, if he has his way—making a case that Weseleskey deserves the Medal of Honor.

HA(L)3 was decommissioned on March 16, 1972. The Navy Reserve, however, commissioned two new helicopter attack squadrons in 1976 and 1977. Modified versions of those units have flown special warfare and search-and-rescue missions in Middle East operations.