Like most teenagers of the time, Tom Copeland had no burning desire to fight in the Vietnam War. But he was drafted into the Army and served for a year in Vietnam with the 1st First Infantry Division. His tour of duty in the war is the centerpiece of  My War and Welcome To It (Sunbury Press, 191 pp. $$19.95, paper; $9.99, Kindle), which is written in a voice ranging from youthful humor and wonderment to one of great fear of being killed. He prefaces this autobiography by saying: “I was aged beyond my years. I became an old man before my time.”

Copeland describes his life growing up in Southeastern New Mexico, mostly outdoors; getting drafted in August 1966; going through infantry AIT; operating from Lai Khe with a ground surveillance team with the Big Red One’s 2nd Battalion/2nd Regiment in 1967-68; and returning home and working his way up a corporate ladder. The last part was the most difficult.

He  describes military life largely by concentrating on the good and bad behavior of men of all ranks. Copeland highlights individualists such as a trainee who got away with impersonating the boot camp commander and drill sergeants, even in their presence.

He saw plenty of action, including fighting Viet Cong forces at Prek Loc II and Phu Loi, in the Ong Dong Jungle during Operation Paul Bunyan, and at Ong Thanh. Copeland writes in detail about the wounded and dead-and-maimed bodies in only one of those operations, Ong Thanh. That battle, he says, “marked a change in the way I saw the war and the value of human life.”

After the war, Copeland suffered decades of emotional stress involving his family, work, and schools without recognizing that he had post-traumatic stress disorder. In 2003, his nephew displayed PTSD symptoms following three deployments to the wars in Iraq and Afghanistan, and Copeland forced the young man to seek medical help. That’s when he realized he had the same emotional problems and went to the VA for treatment. 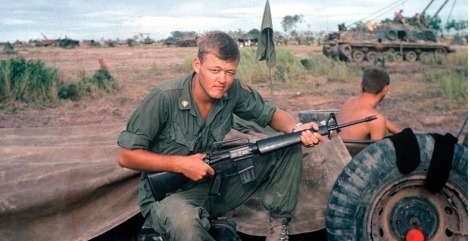 In 2013, Tom Copeland went back to Vietnam to try to ameliorate the negative effects of combat that lingered within him. He and other Vietnam War veterans placed commemorative plaques and flowers at battle sites where friends had been killed.

The book’s concluding chapter is a deeply insightful distillation of the trauma serving in the Vietnam War inflicted on him. He closes that section—and the book—by letting us know that the war is still with him.

“Don’t think for a minute I have forgotten those things that took place years ago,” he writes, “They have just become easier to live with.”