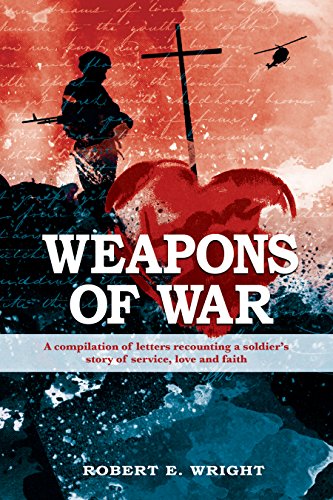 Weapons of War: A Compilation of Letters Recounting a Soldier’s Story of Service, Love, and Faith (AuthorHouse, 212 pp. $23.99, hardcover; $12.99, paper; $3.99, Kindle) tells a love story far greater than a war story. In it, Robert E. Wright gives us letters he sent to Barbara Hampton during his two years in the U.S. Army, which included a 1969-70 tour in Vietnam as an infantryman with the 101st Airborne Division, the Screaming Eagles.

The book works as a love story because Wright’s weapons of war were his M-16 to fight the NVA and Viet Cong; his pen to fight the loneliness and separation he felt; and his faith in God to fight fear and doubt. The power of the latter two exceeded that of the first. His letters concentrated on convincing Hampton that she was his one-and-only love forever.

I enjoyed reading his accounts of military life, but wanted more. That’s because Wright’s desire not to upset his high school sweetheart and their families with his combat experiences made him temper what he wrote. I respected his deep love for Hampton, which he pledged for eternity in every letter, but the memoir would have greater appeal for military history fans if, between letters, he had injected detailed notes about the actions that he otherwise quickly passes over.

The Army drafted Wright while he was still a teenager, and he quietly answered the call. He says military duty made him into “a mature man who is not afraid to make decisions and take on responsibility.” His personal motto of “Stay Focused on the Future” carried him through the war.

I admired Robert Wright’s integrity, particularly denying himself R&R to avoid temptations of the flesh. Best of all, his commanders appeared to respect his certitude about life by assigning him leadership roles above his rank.

Barbara Hampton and Robert Wright married in 1972 and raised two daughters, who like their mother graduated from Ball State University. Barbara died in 2002 at the age of fifty-two. Robert worked twenty-six years for the Indiana Bell Telephone, followed by twenty-one years of full-time ministry with the Eastern Star Church in Indianapolis.

His memoir teaches excellent lessons in self-restraint and perseverance. It includes photographs with many of the letters.