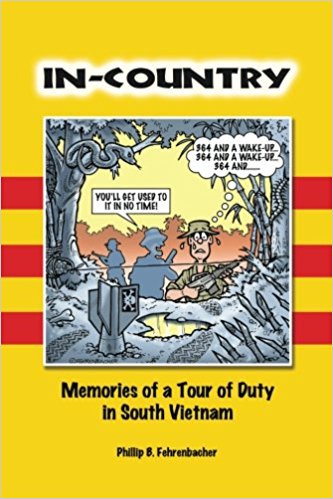 Bill Mauldin’s cartoons immortalized infantrymen Willie and Joe who fought in Europe during World War II. In Up Front, which contains a collection of those cartoons, Mauldin calls his drawings “pictures of an army full of blunders and efficiency, irritations and comradeship.” His basic criterion for humor insists that men of purpose have the capacity to “still grin at themselves.”

In a similar manner, Phillip B. Fehrenbacher drew more than a hundred cartoons based on the Vietnam War. He served nearly two years in Vietnam, in 1968-69, but only began producing cartoons in 2015. He collects them in In-Country: Memories of a Tour of Duty in South Vietnam (CreateSpace, 116 pp. $16.95, paper).

In explaining the long delay, Fehrenbacher might cite Mauldin who said, as a cartoonist, “maybe I can be funny after the war, but nobody who has seen this war can be cute about it while it’s going on.”

Books by the two men share a commonality in that they depict the average GI as a pawn fighting for survival on multiple levels in an arena not of his choice. Their humor derives from situations in which life could hardly be more miserable, but it is.

Fehrenbacher nails the plight of soldiers in a combat zone, but his humor could benefit from tighter unity. His cartoons would be more effective if he had arranged them chronologically. In other words, he should have started with those about new arrivals, then featured experienced troops, then short timers, and finally men ending a tour. In the middle of the book, for example, he depicts a departure of a Freedom Bird, which just does not fit there. Chronology would build a story-telling continuity.

Fehrenbacher also oversells his humor. Above many cartoons, he explains the situation. Below the cartoons, he presents titles that repeat the explanation. But his cartoons are strong enough to stand alone and speak for themselves.

Because Fehrenbacher had nearly half a century for reflection, I expected deeper insights and criticisms of the war to emerge from his drawings. Nevertheless, his final cartoon makes the book’s strongest political statement. In it, a lieutenant asks, “So then…what would the colonel like the body count to be?” A seated colonel looks puzzled and says, “Hmmm….”

On the other hand, I might have expected too much from the book.  “The cartoons are not always funny,” Fehrenbacher says, “but hopefully jog the memories of those who were there and inform those who were not.”

Undoubtedly, he fulfills that goal.

There were comic books back in the 1960s, but the graphic novel hadn’t yet been invented. Now there are two extraordinary graphic novels about the Vietnam War. The first, Dong Xoai, Vietnam 1965 by DC Comics’ Joe Kubert, published in 2010, could have been stripped down into an ambitious comic book project. It’s a visual record of a battle, and Kubert does an amazing job telling the story.

Marcelino Truong’s recently published Such a Lovely War: Saigon 1961-63 (Arsenal Pulp Press, 280 pp., $26.95, paper) is a product unique to the graphic novel: It is graphic, autobiographical, and a novel. And it takes a novel look at the war by telling the story through the perspective of a child in the early 1960s.

This is no ordinary child, however; the boy’s father worked in the South Vietnamese diplomatic corps and became the director of Agence-Vietnam Presse, as well as the official translator for Vietnamese President Ngo Dinh Diem. Not that Diem needed a translator, we learn, but because he wanted time to compose his thoughts.

The book beings in Washington, D.C., and ends with the father’s appointment to a post in London, but for most of the book young Marco is witness to the war’s slow buildup in 1961-63. With a Vietnamese father and a French mother, young Marco reflects the biases of the Catholic elite even while he’s astounded, excited, and horrified by the ever-widening war.

He watches wide-eyed as an enormous aircraft carrier delivers war materiel and helicopters in December 1961. He ducks for cover when rogue Vietnamese pilots attempt a February 1962 assassination of Diem by bombing the Presidential Palace. He marvels at a display in downtown Saigon of confiscated Viet Cong weaponry. 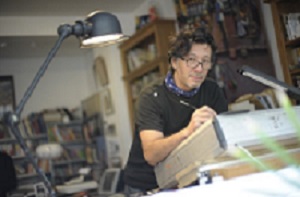 Even as he addresses such complex issues as the failure of the Strategic Hamlet program, class relations among the Vietnamese, the use of Agent Orange, and the self-defeating racism of the American troops, as a child he also has to deal with family issues: the birth of a sister, the death of friends, and the precarious state of a bipolar mother suffering to maintain balance and a family in a war zone.

Such a Lovely Little War (this English translation from the original French is by David Homel) is a fascinating book told in a new way from a new perspective. It’s a new history with interesting comparisons between the North and the South, and between the old ways and the new.

Good news for Books in Review II readers. A second edition of Vietnam veteran Vernon Grant’s Stand-By One! has just been published ( Little Creek Press, 40 pp., $9.95, paper) and his wife Betsy Grant is now on a book tour with her late husband’s cartoon collection. Grant’s cartoons are familiar, but they are as descriptive and humorous now as when he drew them in 1969.

Last November, in a review of Grant’s Point Man Palmer, I wrote: “Cpt. Grant received his Army discharge in 1968 after his tour of duty in the Vietnam War. That’s when he began publishing his cartoons and graphic novels. Stand-By One!, published in 1969, presents panels in which Grant occasionally inserts himself in his depiction of a soldier’s routine in the field, off duty, and in stand down.”

The characters in these humorous and ironic situations include PFC Goonfunkle and other soldiers in foxholes, on patrol, during R & R, and after coming “back to the world.”

These un-numbered pages contain drawings revealing typical and quirky scenes such as troops identifying a rescued Vietnamese villager wearing a Ho Chi Minh tee shirt as having been “re-educated” and four officers standing at an entrance to the “Hanoi to Saigon Subway.”

One combat scene shows two soldiers under a ” rocket attack,”  except it’s raining down copies of Playboy magazine, C Rations, and a television. The caption reads: “It looks like they’re running low on ammunition.”

Another carton shows a Vietnam veteran sitting with his date in a restaurant. He says to the waiter: “A beer for me and a Saigon Tea -er- a coke for the lady.” Grant has also drawn tanks with bayonets affixed and a soldier in counseling with a Chaplain in which they both wear Mickey Mouse ears.

The best way to appreciate these cartoons is to see them together in Stand-By-One!, an affordable last-minute holiday gift. Betsy Grant’s website is http://bvgrantstudio.com

Vernon Grant began drawing birthday cards at age three. His wife Betsy has compiled some of his writings and cartoons in  Adventures of Point-Man Palmer In Vietnam: Cartoons and Writings by Vernon Grant (Little Creek Press,  156 pp., $15.95,paper). Grant’s drawing of the Vietnam Veterans Memorial and Betsy Grant’s dedication set the tone for this biography and introduction to the cartooning of this “artist and soldier.”

Enlisting in the U.S. Army in 1958 launched Vernon Grant’s military and cartooning careers. He went through OCS at Fort Benning in 1960.  “Vernon was the artist for the Classbook for this 50th Company Officer Course,” Betsy Grant writes. “Vernon was one of the 4.6% of the class graduates that were Black.”

Several small problems: The book’s timeline is not consistently chronological; it is not always clear whether quotes are Vernon’s or Betsy’s; the drawings are not dated; and some caption typography can be difficult to read.

In 1964, while a Communications Officer at Ft. Carson, Colorado, 1st Lt. Grant—who died in 2006—presented his Commanding General with a uniquely prepared request for more field radios. It was in the form of a comic strip. The general responded: “Please accept my thanks for the brochure which I have looked through several times with a chuckle.”

Grant had been encouraged in his artistry by his father. He was also inspired by comic books such as Little Lulu, Donald Duck , and Buck Rogers and by encouragement from fellow soldiers.

Cpt. Grant  received his Army discharge in 1968 after his tour of duty in the Vietnam War. That’s when he began publishing his cartoons and graphic novels. “Stand By One,” published in 1969, presents combat life in panels in which Grant occasionally inserts himself in his depictions of a soldier’s routine in the field, off duty, and on stand down. That includes humorous scenes such as a lineman atop a pole observing a North Vietnamese Army patrol passing below and reporting, “Course I’m no Intelligence Expert, but if I was you I’d rate this ‘Current and Fairly Reliable!'”

Betsy and Vernon Grant on their wedding day in 1978

This entertaining compilation features Grant’s tour de farce of Point-Man Palmer and Invisible Peppermint, the protagonist’s girlfriend and guardian angel. When they first set foot on the tarmac in Vietnam Palmer’s helmet proclaims ” SHORT! 364 DAYS 23 HOURS 59 MINUTES.” The adventures take this soldier and his unseen buxom girlfriend through the boonies until Palmer is captured. The surprise ending has Peppermint swimming in the Saigon River trying to save her soldier boyfriend.

Like the comics Grant read as a child, the last page announces in bold type:  “DON’T MISS BOOK TWO! OF POINT- MAN PALMER.”
The entire collections are out of print, but copies are available at www.bvgrantstudio.com
—Curt Nelson