William Winders’ Finally, Home (243 pp. $40, paper) is an amalgam of personal interviews and material gleened from reference materials. The interviews are mainly with Vietnam War veteran and former POW Dan Hefel, the subject of this very good book.

On Dec. 4, 1968, Daniel H. Hefel drove from his home near Buena Vista, Iowa, to the U.S. Army recruiting office in Dubuque and enlisted. In April 1969 PFC Hefel found himself in South Vietnam at Camp Sally as a 101st Airborne Division riflemen toting an M79 grenade launcher. For the next few months he took part in many large and small-scale actions from the A Shau Valley to the DMZ. Neither the NVA nor the VC could slow Hefel down, but a mosquito disabled him for a few weeks with a dose of malaria.

During this down time, Dan Hefel applied for and got permission to transfer to a 101st Aviation platoon as a Huey door gunner. He soon began flying missions manning an M60 machinegun.

On February 5, 1970, his chopper crashed near the A Shau Valley. The pilot died. Hefel and two other crew members survived, only to be captured by the NVA. They were transported to Hanoi and thrown in POW camps.

In Finally, Home, Dan Hefel recalls his POW experiences, which included recovering from a broken back and other crash injuries and dealing with torture, loneliness, and mental anguish. At one point, the prison doctor performed an emergency appendectomy on him without anesthesia.  After being held for three-plus years, on March 27, 1973, Hefel, along with 590 fellow American POWs, was released.

A year after returning to the U.S., Hefel was declared disabled due to his combat injuries and retired from the Army as a staff sergeant. He returned to Iowa, reunited with his family and friends, got married, raised a family, and is now living the American Dream on his Harley. More than a few American aviators have written about their time as prisoners in Hanoi during the Vietnam War. Tap Code: The Epic Survival Tale of a Vietnam POW and the Secret Code that Changed Everything (Zondervan, 256 pp. $26.99, hardcover; $14.99, Kindle);  $26.99, audio CD), a memoir by retired Air Force Col. Carlyle “Smitty” Harris, a POW for nearly eight years, differs because it intersperses chapters of his wife Louise’s experiences during his time in captivity. The two of them exemplify the highest form of dedication to the nation from an American military family.

Sara W. Berry, an author and publisher, helped Smitty and Louise Harris finish the book, which he had started writing in the late 1970s.

In the Vietnam War, Smitty flew the F-105, and on April 4, 1965, became the sixth American shot down over North Vietnam. He is best known for recalling a Second World War tap code that a sergeant taught him during an after-class chat at survival school. After he was captured, Smitty taught the code to fellow POWs who passed it on to others.

The code provided a communication system in an environment in which guards enforced silence and prisoners spent long periods in solitary confinement. In his memoir, A P.O.W. Story: 2801 Days in Hanoi, Col. Larry Guarino says that the code was “the most valuable life- and mind-saving piece of information contributed by any prisoner for all the years we were there.”

Smitty Harris’ account of his imprisonment parallels what other POWs have recorded over the past forty-five years. All of them, including Harris, endured brainwashing, torture, starvation, untreated illnesses, and isolation at multiple prison camps in the Hanoi area, including the infamous Hanoi Hilton. He recalls the names and behavior of fellow POWs, focusing on their ability to comply with the Code of Conduct. He emphasizes the importance of a religious belief in maintaining a positive mentality. “GBU”—God bless you—was the most frequent message tapped out in prison, he says.

Louise Harris also coped with challenges she never expected. She and the couple’s two daughters had accompanied her husband to Kadena Air Base, Okinawa. When the United States began to bomb North Vietnam, his F-105 squadron deployed to Korat Air Base, Thailand. Five weeks after Smitty Harris was shot down, Louise gave birth to their only son. 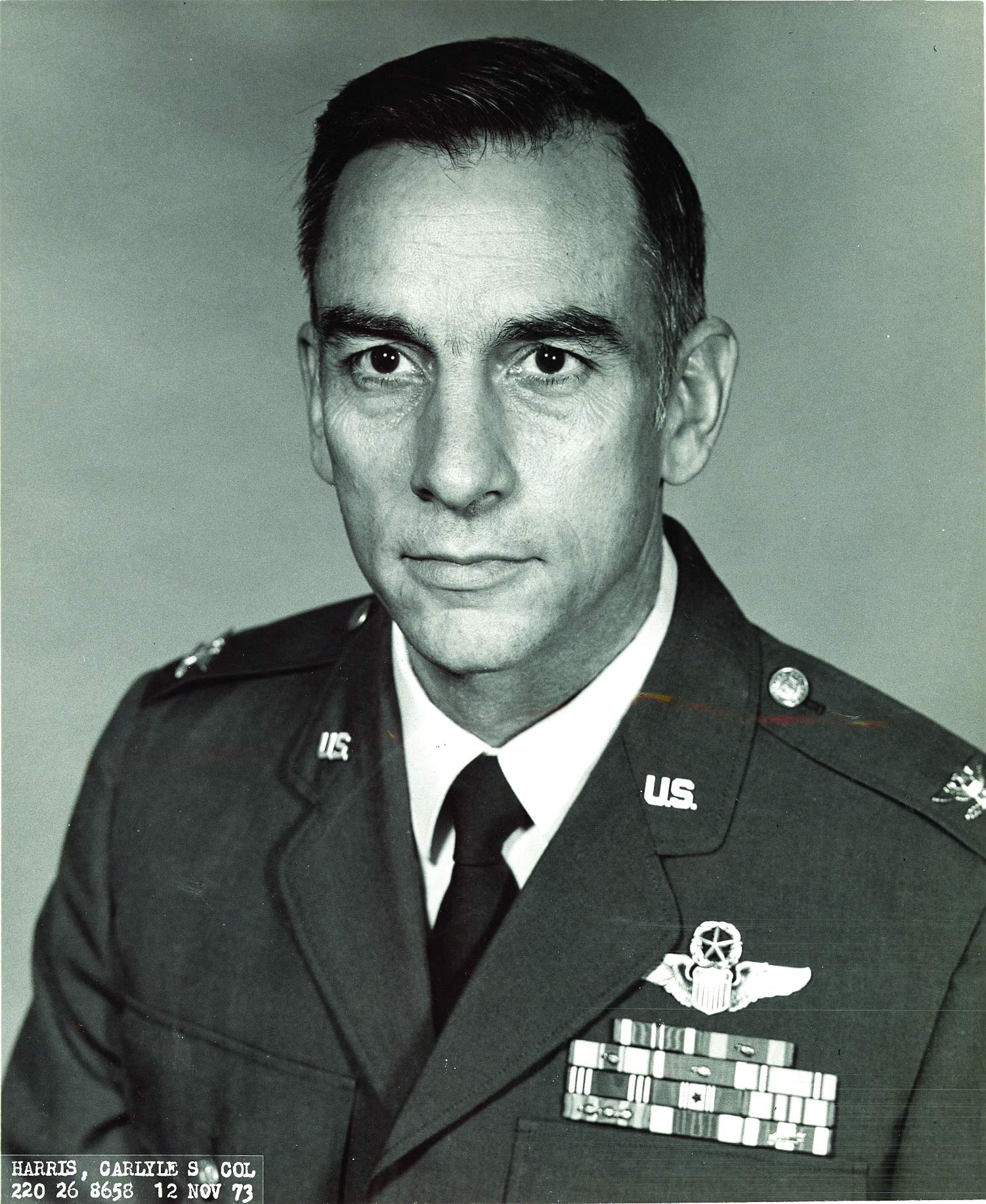 As “the first MIA spouse to return to the States,” Louise Harris encountered military regulations that were unfair to her and the children. Consequently, she faced down the Secretary of the Air Force and leaders of the VA, thereby helping clear the path for wives of those Americans who would be subsequently taken captive.

She solved another major problem by phoning the president of the General Motors in Detroit—collect. After settling in Tupelo, Mississippi, Louise Harris went on to play a role in planning procedures related to the POWs’ release.

Smitty Harris gained his freedom in 1973. He and his wife smoothly blended back together,  raised their children, and happily settled in Tupelo following his Air Force retirement. He explains how readjusting to life back home was not as easy for other POWs and their wives.

Americans who spent time in Hanoi prisons shared a deep friendship and enjoy frequent reunions. They recognize themselves as a breed apart.

As the fourth highest-ranking officer among the prisoners held in Hanoi by the North Vietnamese, Navy Commander Jeremiah Denton set a standard of behavior virtually beyond imagination in fulfilling the rigid expectations of the official Code of Conduct for Members of the Armed Forces of the United States.

Denton’s seven-and-a-half years—from July 1965 to February 1973—as a prisoner have been well chronicled. That includes When Hell Was in Session, Denton’s 1982 memoir. The latest recreation of Denton’s POW experience is Alvin Townley’s Captured: An American Prisoner of War in North Vietnam (Scholastic Focus, 256 pp. $18.99, hardcover; $11.99, Kindle), a book for Young Adults. The two men were friends until Denton’s death in 2014 at age 89. Captured captures the bravery of the American POWs’ resistance against North Vietnamese torture.

Of the Code of Conduct’s six Articles, Denton—who was promoted to Rear Admiral during his captivity—concentrated on two: First, he took a leadership position among prisoners when he was the senior officer of a group. Second, he emphasized providing the enemy with only name, rank, service number, and date of birth.

“And if you say more,” Denton ordered, “make them beat it out of you.” He stressed that a prisoner’s ultimate goal was to maintain personal integrity in order to return home with honor.

“[Jerry] defined leadership with a fearless sense of bold, almost unthinking, self-sacrifice,” Townley says. He “took the punches and the rope first. If he didn’t, how could he expect others to follow his orders?”

The North Vietnamese favorite (and most effective) type of torture was to bind a prisoner in ropes that compressed his body and drastically reduced blood circulation and breathing, and then leave him in that position for hours. Other tortures included long stretches of solitary confinement, often in darkness; imprisonment in a four-by-four-foot concrete cell; a parade through Hanoi that allowed the public to abuse the prisoners; feeding the men soup laced with human feces; and bombarding them with propaganda.

Denton advised his subordinates to “take torture and before you lose your sanity, write something harmless or ludicrous.” At the same time, he believed “a prisoner should not make any statement disloyal to the United States.”

Although he advocated a hard line, Denton understood that no one can hold out forever in the face of torture. During periods of unrelenting, brutal torture, all prisoners “signed the apologies, the confessions,” Townley notes.

The North Vietnamese viewed American prisoners as political tools whose confessions could validate the United States as an aggressor nation in the eyes of the entire world.

In my mind, the degree of man’s inhumanity toward his fellow man is incalculable. From that premise, I attempt to quantify the degree to which political, racial, and economic differences affect a jailer’s treatment of his prisoners. I often have wondered if the men who originally wrote the Code of Conduct ever had even an inkling of similar thoughts.

Retired Navy Capt. Allen Colby Brady spent more than six years as a prisoner in Hanoi during the time Denton was there. He recently published an account of that experience in Witnessing the American Century: Via Berlin, Pearl Harbor, Vietnam, and the Straits of Florida. His attitude and actions as a prisoner slightly differed from Denton’s. Still, considering the intensity of their environment, even the slightest differences provide extremely interesting comparisons.

Being injured and at the mercy of a hate-filled enemy is a fate equal to death. Retired Navy Capt. Allen Brady experienced six years, one month, and thirteen days of such an existence as a prisoner of war after being shot down during a bombing mission over North Vietnam.

That period composes the core of Brady’s Witnessing the American Century: Via Berlin, Pearl Harbor, Vietnam, and the Straits of Florida (Kent State University Press, 242 pp. $29.95, hardcover and Kindle), written with Dawn Quarles.

With vivid clarity, Brady recalls the torture inflicted on him and other American POWs by North Vietnamese interrogators. Much of what he relates has been written about by other prisoners in their memoirs, but Brady’s ordeal nevertheless serves as testimony to a human being’s determination to survive life’s harshest conditions with honor.

His career as a U.S. Navy fighter pilot followed the cutting edge of America’s military actions from 1951-77. Furthermore, Brady’s pre-teen years included traveling the world with his father, a Navy officer who eventually retired as a rear admiral. The family spent time in Germany while Hitler consolidated power and in Honolulu when the Japanese bombed Pearl Harbor—details of which are engraved in Brady’s mind.

After graduating from Annapolis and earning his wings at Pensacola, Brady flew fighters for peacetime aircraft carrier operations and nuclear bomb tests in the Marshall Islands. He took part in both the April 1961 Bay of Pigs Invasion of Cuba and the October 1962  Cuban Missile Crisis.

Although he played limited roles in these operations, Brady presents a good big-picture view of them. In particular, his memory and introspection of the bomb tests and Bay of Pigs fiasco provided details new to me.

Unfortunately for Brady, however, all roads led to Hanoi. He describes North Vietnamese practices that violated the 1949 Geneva Convention protocols on humane treatment of prisoners of war. He characterizes Ho Chi Minh as a “merciless tyrant,” citing the fact that prison conditions improved after Ho died in 1969. Brady solidifies his point by describing prolonged torture sessions, many of which ended with the killing of a prisoner. He devotes a chapter to the “Outer Seven,” the POWs who cooperated with the North Vietnamese.

Brady has not forgiven our former enemy. “America,” he says, “should never have a relationship with any country that once abused our citizens.”

Still, Brady calls the Vietnamese people “very peaceful,” blaming their aggression on their history of being invaded by the Chinese and the French, and on Ho Chi Minh’s leadership. He also forgives the Outer Seven, expressing disappointment rather than vengeance.

Quarles helped Brady write the memoir by organizing his many good stories. In them, he shows himself as both hero and goat.