Raymond Gustofson’s Agent Orange: An Insidious Legacy (148 pp. $14.99, paper; $7.99, Kindle) is a short book with just 138 pages of text, but it contains a big message. Virtually every Vietnam War veteran is aware of the enormous amount of of toxic herbicides the U.S. military rained down upon South Vietnam—and, by default, upon U.S. and allied troops on the ground. “Deny the enemy sanctuary” was the mantra of Operation Ranch Hand, the spraying mission that went on from 1962-71. Agent Orange was the main—but not the only—chemical agent involved.

Gustafson writes about growing up and his decision to enlist in the U.S. Marine Corps at age 17 right after high school. Coming from a family that traced its military service back through to the Civil War, it seemed like the right and logical thing to do. Service was in his bloodline.

He goes on to describe his time in-country beginning early in 1966 with the 1st Battalion, 3rd Marines in the 3rd Marine Division, including getting wounded, medevaced, being put back together, returning to the war, and then extending his tour for seven months. Throughout, Gustafson includes details about AO, including how it was manufactured and dispersed, its long and short-term effects on humans, and how the Department of Veterans Affairs has handled research and benefits.

After his discharge, Roy Gustafson, like many other Vietnam veterans, buried his war deeply inside himself. He did not talk about his experiences in Vietnam until he confronted serious medical issues related to AO exposure, along with post-traumatic stress issues.

The book is not confrontational, but informational. There is no excoriation of the VA that other books about AO contain. Gustafson does describe VA administrative missteps, but does not dwell on them. He backs up what he writes with excellent references throughout the book and in his bibliography.

Over all, Agent Orange: An Insidious Legacy is a heartfelt effort and a good beginning point for readers to learn the basics of this important issue, especially the serious health issues for Vietnam War veterans and their children and grandchildren.

America’s war in Vietnam caused Larry Kenneth Hunter to fight the two most desperate battles of his life. The first occurred in 1966 at Chu Phong Mountain when more than 1,000 North Vietnamese Army troops ambushed his company. The second came in 2012 when the after-effects of exposure to Agent Orange paralyzed him multiple myeloma—commonly known as bone cancer—a disease with symptoms that often do not appear until the disease reaches a highly advanced stage.

With encouragement from his therapist, Dr. Mark Randall, Hunter tells the stories of these battles in Fire Mission! Fire Mission! A Forward Observer’s Experiences in Vietnam (Koehler Books, 172 pp. $2.95, hardcover; $15.95, paper; $7.99, Kindle). Almost all of the book’s Vietnam War recollections are based on letters Hunter exchanged with his wife Judy.

Larry Hunter served seven and a half months as a forward observer with the First Air Cavalry Division operating from An Khe. He flew in more than 25 engagements during search-and-destroy missions that usually lasted from two to four weeks. His company killed a great number of enemy soldiers—the majority attributed to artillery fire—but suffered many casualties. Hunter explains how the Cav initially learned by doing.

Sent to rescue crews of three downed helicopter at Chu Phong, Hunter and his men instantly were ambushed. During fighting that began in late afternoon and extended through the night, his unit lost half of its 130 men, primarily its officers. After the North Vietnamese shot down a Chinook sent to rescue the rescuers, Hunter assumed control of the operation. Although convinced that it was his last day on earth, he masterfully directed Army helicopter gunships and Air Force fighter-bombers and managed to resupply the men with ammunition—actions that helped his company survive until morning. He received a Bronze Star with V device for his courage and leadership.

When he went to Vietnam, Hunter left behind his wife and a newborn son. In exchanging letters, Judy Hunter provided strong support for the war and for her husband’s role in it. Avidly following First Cavalry news reports, she enthusiastically commented on the unit’s success. “Heard yesterday where 1st Cav destroyed an entire Battalion of NVA,” she wrote in one letter. “Good work.” Both repeatedly thanked God for sparing Larry Hunter from injury.

With his wife’s strong support, Hunter was nearly equally successful in his fight against cancer. After a successful thirty-year business management career, the couple had nearly finished building their dream retirement home when Hunter became partially paralyzed from cancer.

They counterattacked the disease with every available weapon: radiation, chemo, new drugs, physical therapy, a stem cell transplant, months of isolation, and faith in God. Although multiple myeloma is considered incurable, one doctor enthusiastically told Hunter: “Your blood results are fantastic. You are in complete remission.”

Twenty-one months later, in 2016, the cancer returned, and Hunter has been fighting a life-and-death battle ever since. He and Judy still pray and enjoy days of temporary victory.

Fire Mission! Fire Mission! held my attention for several reasons. Hunter, for one thing, provides map overlays of significant missions. And he teaches lessons about employing artillery: “We’ve put Batteries into some of the wildest country you’ve ever seen,” he writes. “You couldn’t have pulled in there in a truck in less than a month and in minutes we started shooting for the Infantry.” He pays tributes to officers and enlisted men killed in action.

Most important, however, Larry and Judy Hunter accepted whatever challenges confronted them. For me, reading about their indomitable spirits significantly narrowed the morbidity of the current perilous world situation. They set examples for how to survive when facing disaster. 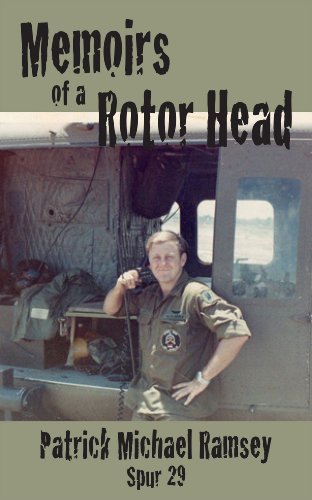 A justifiable bitterness pervades Patrick Michael Ramsey’s Memoirs of a Rotor Head (Mennonite Press, 152 pp. $31.01, paper; $3.99, Kindle). In 1970-72, Ramsey flew back-to-back Vietnam War tours as a UH-1 pilot. He survived everything the enemy threw at him, but also saw close friends get killed. Now he is dying from cancer caused by exposure to Agent Orange and other highly toxic defoliants. And he feels betrayed.

With the draft breathing down his neck, Ramsey enlisted in the Army late in 1967, and was inducted on January 8, 1968. “First and foremost,” he says, “I am an America serviceman” who has “flown in harm’s way to protect the freedom of Americans.”

The first half of his memoir shows how Ramsey prepared for, and then participated in, the Vietnam War.  Amid a climate of hyperactivity bordering on chaos, Pat Ramsey joined the 7th Air Cavalry at the beginning of the 1970 incursion into Cambodia.

With only thirty hours of combat flying, Ramsey was upgraded from copilot to pilot. Simultaneously, he took charge of crew assignments. Furthermore, because he went through infantry AIT, Ramsey was assigned command of a twenty-man platoon and helicoptered into the field as a grunt. To my disappointment, he provides few facts in his book about that responsibility beyond expressing his joy in hearing “that wop-wop-wop of the rotor blades” of helicopters en route to extract his unit.

His view of the war reflects nervous dedication to tasks that were questionable from their beginning. He admits to living for the excitement of facing danger, but an excitement tempered by near disasters. His stories gave me the impression that his unit operated with minimal leadership. The men seemed to do whatever they thought necessary at any moment. Losses were the consequence.

Ramsey complements stories about his experiences by giving history lessons about the war. In them, he summarizes Vietnamese history and America’s role in it.

Displeased with the paperwork mentality of a peacetime Army, Pat Ramsey ended his military career as a captain in 1973. From there, he sold insurance, married, divorced, raised a daughter as a single parent, and for five days a month flew CH-54 Sky Crane helicopters for the National Guard.

After twenty years, with pension money in his pocket and a daughter off to college, he resumed his search for adventure and became a medevac pilot for Life Star. Six years of “from fully asleep to fully alert in thirty seconds,” as he puts it, was enough, so Ramsey enrolled at Kansas State and earned a second bachelor’s degree in three semesters. He then joined the Peace Corps in Nicaragua. He later worked as a National Park Service Ranger in six parks in twelve years—all of which he describes in travelogue-like language in the book’s second half.

In 2007 doctors told Ramsey he had Parkinson’s Disease, “for which there is no cure, only death,” as he puts it. Three years later, the VA conceded that his problem was the result of exposure to Agent Orange. In his memoir, Ramsey calls for accountability by the manufacturers of defoliants that were used in Vietnam.

Five pages titled “Everything I Ever Needed to Know in Life, I Learned as a Helicopter Crewman in Vietnam” summarize his war experiences and close Memoirs of a Rotor Head on a note of gallows humor.

Ramsey is donating all profits from the book’s sale to a veterans service organization.

A look back at the chemical abuse that the United States perpetrated against the population and topography of Vietnam during the American war dictates a look forward about the enduring effects of that action. Defoliation of the countryside by the use of Agent Orange/dioxin and other toxins took place between 1961 and 1970; its effects are still apparent fifty years and several generations later.

Making amends for the use of Agent Orange has been difficult. Le Ke Son and Charles R. Bailey promote this effort in From Enemies to Partners: Vietnam, the U.S. and Agent Orange (G. Anton, 242 pp. $29.99, hardcover; $19.99, paper; $9.99, Kindle). Son and Bailey have collaborated on this problem since 2006. Son holds a PhD in toxicology; Bailey has a PhD in agricultural economics. Both men have worked with agencies such as the Red Cross and Ford Foundation on correcting the damages inflicted by Agent Orange.

From 1975-2006, Agent Orange was “an extremely sensitive and controversial subject,” the authors write. “Official views were polarized, information was scant, disagreement was rife and suspicions on both sides ran high.” They counter this situation by assembling enough data to make Agent Orange a discuss-able topic. The book highlights the contributions of people and organizations that have helped to compensate for Agent Orange’s misuse.

The thoroughness with which Son and Bailey examine the Agent Orange/dioxin situation  is spellbinding. They have assembled a wealth of data that arguably amounts to more information on the topic than may be found in any other single publication.

They open their argument with a province-by-province review, complete with charts and studies, that shows—among other things—that dioxin still exists in Vietnam. They then examine dioxin’s impact on people and the ecology. There also are charts, tables, and studies to promote awareness among Americans and Vietnamese about the problem and the needs of victims. The book ends with a summation of bilateral efforts to date and proposals for the future.

The magnitude of future problems relates to locales, expenses, and people. American bases at Da Nang, Bien Hoa, and Phu Cat were Agent Orange’s most toxic areas. Da Nang has been cleansed of poison. The cost of remediating Bien Hoa is estimated at $375-$500 million and will take a decade, the authors say. Meanwhile, several hundred thousand young Vietnamese with birth defects linked to AO exposure passed on through their parents, grandparents, and great-grandparents await help, according to the authors.

Son and Bailey argue for continued collaboration between the United States and Vietnam and urge greater funding by Americans to finish tasks such as sanitizing the Bien Hoa Air Base.

A raft of color photographs pays tribute to people who have supported the cause. An appendix cites the Ford Foundation and seventy-eight of its grant recipients. Another appendix—”Fifty-Five Years of Agent Orange: Timeline of Key Statements, Decisions and Events 1961-2016″—provides an excellent twenty-four-page summation of the book’s theme.