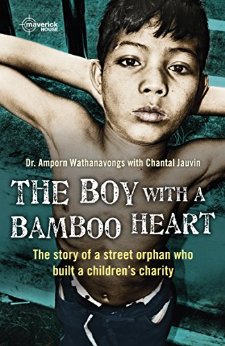 The opening chapter of The Boy with a Bamboo Heart: The Story of a Street Orphan Who Built a Children’s Charity (Maverick House, 2812 pp., $15, paper: $2.99, Kindle) has a newly orphaned five-year-old Thai boy named Lek next to his mother’s flaming funeral bier in a rural Thai village attempting to hold her burning hand. He is simply unable to face life without her, a frightened boy who will be thrust into a life on his own in which he must steal to survive.

“The village held nothing for me but bad luck,” author Amporn Wathanavongs writes in this memoir. “I wanted to leave this place and never see it again ever.”

Lek walks away alone, stows away on a train, and gets off at the first stop. Each rung of his life ladder to adulthood comes with a name change. His first new designation is the nom de guerre “Boney,” which the teenager acquires when recruited into mercenary action against the French.

The Indochina War from 1946-54 spilled over from Vietnam into neighboring Cambodia. Suddenly Boney finds himself in fighting in the jungle. After a brutal fight he is the sole survivor of his unit. Suffering from the stresses of battle and the loss of his family leads to two suicide attempts. Taking the advice of his hospital nurse, Boney returns to Thailand.

“There, in my natal village, I would claim my right to a family of my own,” the author writes, “or I would join my parents in death.”

Introducing himself to the Abbot of a Buddhist temple led to another name change, this time “Nehn Amporn,” a moniker presented to him along with the orange robe of a novice monk. Amporn learns to read while absorbing Buddhist philosophy from his teacher. “Words were sweeter to me than mango sticky rice,” he writes

Amporn was advised to move on from his small village temple to continue his education in Bangkok, sometimes called the City of Angels. Unable to afford admission to a large temple, he joined a smaller one with only three monks, all of whom were thirty years older. “That would allow me to study without making too many demands. I was seeking intellectual enlightenment,” he writes. This led to the third name change. He was ordained as “Bikkhu Visalo” in 1958.

His introduction to an English teacher was also his first exposure Christianity. He soon decided he was a “fake monk,” and decided to renounce Buddhism. This step led to his final name change, Amporn Wathanavongs.

He found employment at a Jesuit school called Angel Center. His celibate temple life had ended and he met his future wife near the center. “Her eyes,” he writes, “like raindrops on a banana leaf in the morning, mesmerized me.”

His marriage and earning a Master’s Degree in the Philippines completed Amporn Wathanavongs’s rise from being alone and poor to being an advocate for children in poverty. “With the Vietnam War over,” he writes, “I knew it was only a matter of time before the Americans packed up and went back home.”

Funding for humanitarian projects was difficult to find. He was hired by the non-governmental agency, The Christian Children’s Fund, and when he retired, he chartered his own agency, The Foundation for the Rehabilitation and Development of Children (FORDEC), on Valentine’s Day of 1998. He was 61 years old.

In appreciation of his work on behalf of children, King Rama IX of Thailand decorated Amporn Wathanavongs with the Most Exalted Order of the White Elephant. In 1996 he received an honorary doctorate from American Coastline University of Louisiana. 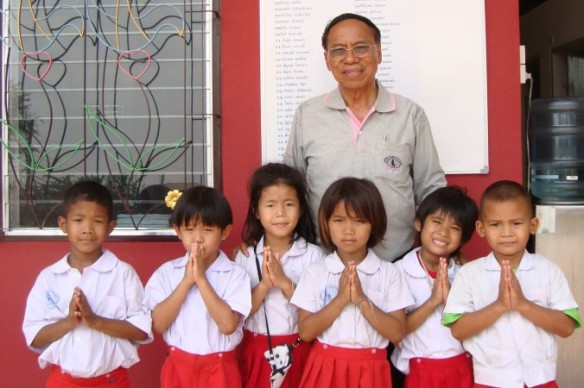 I recommend this concise, well-written (with the help of Chantal Jauvin) memoir to anyone who served in Southeast Asia.