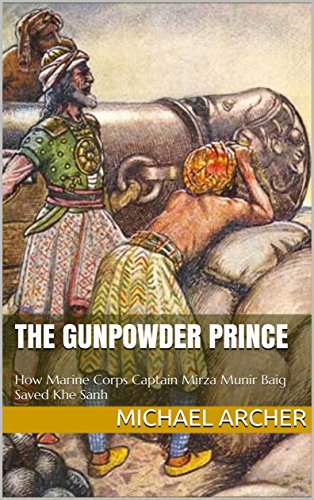 My USAF C-130 crew flew LAPES and CDS supply drops over besieged Khe Sanh in 1968. Our best flight there, however, took place on the day the siege ended. We landed and on-loaded a hundred Marines led by a captain whose humongous grin is still imprinted in my brain.

“I’ve never been this happy to leave anyplace,” he said, and thanked us at least a dozen times.

Khe Sanh is legendary in military history as both a high and low point for Americans and North Vietnamese. Thirty thousand NVA soldiers surrounded 6,000 United States Marines for ten weeks at that remote combat base in Quang Tri Province. The NVA failed to capture the base. After the siege lifted, however, the Americans abandoned the base and destroyed it.

Michael Archer, a nineteen-year-old Marine PFC at the time, served as a radio operator in the Khe Sanh Fire Support Coordination Center. He helped keep aircraft free from the line of fire of outgoing artillery, working alongside Capt. Mirza Munir Baig, a man with “a head like a computer,” who programmed the artillery.

Archer pays tribute to Baig in The Gunpowder Prince: How Marine Corps Captain Mirza Munir Baig Saved Khe Sanh (Amazon Digital Services, 145 pp. $14.95, paperback; .99, Kindle). Born to a royal family of India, Baig became an American citizen and chose a warrior’s life. He arrived in Vietnam in 1963, two years ahead of Marine combat units, and roamed the countryside developing a spy network and interrogating prisoners. In 1966 he saw action as an artillery officer in Operation Hastings before returning to in-country counterintelligence the following year.

Baig’s leadership skill rested on three factors: knowledge of past tactics followed by Vo Nguyen Giap, which allowed him to anticipate enemy maneuvers; an ability to predict enemy troop deployments based on listening to audio pickups from a top-secret sensor system; and an art for segmenting terrain into target areas, which expedited delivering firepower ranging from artillery shells to B-52 bombs.

Additionally, when targeting, Baig took advantage of the NVA’s lack of radio discipline: They often led him to themselves. Archer shows how these talents stifled buildups of NVA men and equipment necessary to overrun Khe Sanh, thereby forcing the enemy to switch from assault to encirclement tactics.

Baig’s biggest problem was poor intelligence. He felt “uninformed and in constant peril” while awaiting information that sped up the chain of command but trickled down slowly, Archer writes. That information was “old, incomplete, and almost always useless” to him. My own Vietnam War experience also included intelligence briefings that lacked timely data.

While lauding Baig, Archer analyzes the siege from both sides. He discusses the decisions of President Johnson and Gen. Westmoreland, which are familiar to many Americans. Of greater interest, he presents the thinking of the North Vietnamese. They recognized, Archer writes, that “an absurd series of mishaps, flukes of incredible bad luck, and appalling security blunders” kept the NVA from repeating a Dien Bien Phu-type victory.

Recent English translations of Vietnamese books and articles are providing insights that confirm or deny ideas that, for half a century, have been speculation among western thinkers. Archer refers to such sources throughout his book.

Similarly, by researching NVA archives, Istvan Toperczer of the Hungarian Air Force revealed the enemy’s side of the war in his books, MiG-17/19 Aces of the Vietnam War and MiG-21 Aces of the Vietnam War. Furthermore, information is now available regarding inadequate NVA defensive actions along the Ho Chi Minh Trail, particularly efforts to reduce large-scale transportation losses to American AC-130 Spectre gunships.

The Gunpowder Prince is Archer’s third book about Khe Sanh. It contains a great deal of new material. Archer has done his homework and presents scholarly arguments. At the same time, he finds interest in everyday events.

He provides an array of photographs to enhance the text. Both of his previous books have won awards.

The Long Goodbye: Khe Sanh Revisited (Hellgate Press, 367 pp., $21.95, paper; $9.99, Kindle) is an exceptional book on many counts. It is very well researched and generously documented. As it is largely autobiographical, the book conveys to the reader a significant you-are-there quality. Plus, there is an element of mystery to this story, which covers more than four decades

Author Michael Archer includes the de rigueur critique of the tactics used in the Vietnam War by rifle units during his phase of the war. But the central theme of the book is the philosophical issue of battlefield casualty recovery and to what extent it should be pursued. It is an unwritten policy in the U. S. military that every effort should be made to recover combat casualties from the battlefield. This policy is designed to promote comradery, morale, and mutual loyalty.

I believe the most important contribution this book makes to military literature is the standard it sets for loyalty and caring among fighting men and women embodied in the statement: “No soldier will be left behind” on the battlefield.

The author narrates a poignant story about his close friend Tom Mahoney, his close friend from high school. Archer and Mahoney joined the Marine Corps together. Both went to Vietnam where they faced combat and death. It is this experience that helped them develop maturity, responsibility and loyalty that lasts throughout their lives.

Mahoney was killed at Khe Sanh in 1968. Despite their best efforts, his fellow Marines were unable to recover his body. What followed was a long, earnestly pursued effort to bring him home. It involves many Marines, both those who made a career out of their military service and those who left active duty after the war.

Archer, in loving detail, tells of his and others’ efforts to recover the body of their deceased comrade. No one involved in this recovery task is left unaffected. These efforts include personal attempts at recovery as well as official government recovery attempts in which they participated.

Altogether these efforts have lasted more than forty-five years. 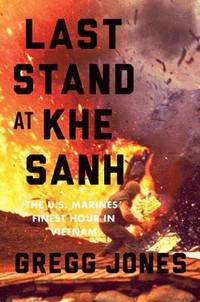 Gregg Jones’s 2014 book, Last Stand at Khe Sanh: The U.S. Marines’ Finest Hour in Vietnam, is now available in paperback (Da Capo, 358 pp., $16.99). Veteran journalist and author Jones, best known for his book on the Philippine War, Honor in the Dust, concentrates here on telling the personal stories of the American Marines in the trenches in the pivotal Vietnam War battle at Khe Sanh in 1968.

As we noted in our review in Books in Review column in the July/August print issue, “this informing book serves as a testament to the Khe Sanh Marines who, as Jones puts it, ‘heeded the call of their duly constituted leaders’ and ‘went to Vietnam with the best of intentions,’ earning ‘a place of honor in American history.’”