When Bob Whittaker was a student in the sixties, his sympathies were with the antiwar movement. He was working as a primary school teacher in western Queensland in Australia when he was drafted into the Aussie army in 1969.

In his memoir, Jellybeans in the Jungle: From Teacher to NASHO and Back (EIEIO, 165 pp., $32, AUD, hardcover; $7.50, AUD, e book), we learn the details of recruit training, after which Whittaker was assigned to the 7th Battalion, Royal Australian Regiment, which deployed to Vietnam in 1970.

Whittaker describes his service in Vietnam which included deadly encounters with the enemy as well as humdrum service in the rear where he worked as a projectionist—a job he’d learned as a civilian teacher on a similar Bell and Howell machine. We also learn a lot about R & R in Bangkok.

Whittaker writes about his re-entry problems after coming home to Australia. He encountered many of the same sorts of prejudices that Americans did when they returned home from the Vietnam War. He had no brass band waiting for him in Toowoomba.

Whittaker says that in the book he focuses mostly on the lighter aspects of his tour of duty. But he also describes incidents of friendly fire and includes a discussion of the effects of carpet bombing on the indigenous population, as well as details about Agent Orange and what it did to the people and environment in Vietnam—and what it did to him personally. He is convinced that one of his offspring was born dead due to his extreme exposure to the highly toxic defoliant.

“More than thirty-five years later, in the summer storm season at my home in Toowoomba, the sound of distant thunder reminds me of the rumbling sound of B-52s carpet bombing suspected North Vietnamese concentrations,” Whittaker writes. 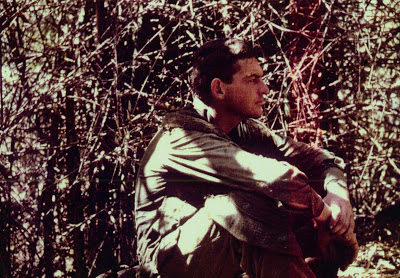 Whittaker in the jungle

I was especially interested in the comments he makes about the ARVN being not good soldiers and that there were “some very good American units.” He goes on to say, though, that he didn’t “trust the Americans after witnessing a live-fire demo” during his first week in-country.

The jellybeans of the title (and featured on the cover) do appear in the book, but how they appear is too complicated to explain here. Buy this fine book and read more about jellybeans than anyone needs to know.

For ordering info, go to the book’s website, jellybeansinthejungle.blogspot.com