Bruce Olav Solheim is a distinguished professor of history at Citrus College in Glendora, California. As the blurb on the back cover of the second edition of Solheim’s Making History: A Personal Approach to Modern American History (Cognella Academic Publishing, $68.95, paper) notes, this history book is “The Education of Henry Adams meets On the Road.”

In other words, the book is a personal approach to U.S. History. What does that look like? In Chapter One, title “Reconstruction,” the first sentence is: “After basic training at Lackland Air Force Base in Texas, my brother Alf was sent to radio school at Keesler Air Force Base in Biloxi, Mississippi.”

No other American history book would tell us that the author’s brother is named Alf, let alone that he did basic training in Texas. How can this be justified in a chapter about Reconstruction?  Solheim does that quite neatly.

He goes on to say that his brother Alf entered a barbershop in Biloxi with a black airman from Detroit, a friend of his. The friend was asked to leave the barbershop, and Alf got his lesson in the results of Reconstruction in the South: Jim Crow. In Chapter Two, “Rapid Industrialization,” we get the same format—and the same smooth introduction to a difficult concept made clear by the use of a personal anecdote.

In twelve cogent, well-organized chapters, Solheim provides history students introductions to U.S. Imperialism, the Progressive Era, World War I, the Twenties and the Great Depression, World War II, the Cold War, the Civil Rights Era, the War in Vietnam, the Conservative Revolution, and the “American Empire in Decline.”

It had been a long time since I studied American history in an organized manner, so I was quite gratified to get this refresher course. I needed it.

Each chapter begins with a one-page comic strip by Gary Dumm, giving pictorial voice to the words that follow. A modest disclaimer: On page 298, at the beginning of the Vietnam War chapter, I am introduced as a comic strip character, sitting at a typewriter in Vietnam, typing a memo for the colonel for whom I worked for a year.

Bruce’s brother Alf is also in this strip. The text notes that Alf Solheim is a disabled veteran after his two tours in Vietnam, that he suffers from PTSD and from Agent Orange-related leukemia.  Rarely is the butcher’s bill of war made so personal in an American History book.

This fine book is a revolutionary piece of work. It knocks over the apple cart of all clichéd, hidebound history books that don’t even try to reach an audience that desperately needs to know more about the history of their complex country. I thank Bruce Solheim for daring to risk breaking out of the bonds of traditional learning and teaching.

If I were still in the classroom, I would use this book as a textbook every quarter and be proud to do so.

Bruce Solheim is a distinguished professor of history at Citrus College in Glendora, California.  He served six years in the U.S. Army as a jail guard and as a helicopter pilot. He founded the Veterans Program at Citrus College, and teaches Vietnam War-related history classes.

The three kids in Solheim’s children’s book, Ali’s Bees (CreateSpace, 142 pp., $9.89, paper; $2.99, Kindle)—Ali, Lupe and Jenks— learn how to cooperate on a science project. Ali wishes he could feel at home in Los Angeles with his beekeeper grandfather with whom he went to live after his parents were killed in a terrorist attack in Iraq.

Ali has PTSD related to that terrorist attack he survived, but his family did not, except for his grandfather. His grandfather has Ali work with bees as therapy for his PTSD. Ali works with Lupe, a classroom friend, and with Jenks, a bully. Jenks has problems of his own as his father is confined to a wheelchair because of wartime injuries. The horrors of war live on every page of this book.

Some of the five illustrations by Gabby Untermayerova of Jenks’ father in his wheelchair brought tears to my eyes. Full disclosure: Often these days I am in a wheelchair, too.

This book can entertain and benefit all ages of readers. It can also teach how to try to overcome the ill-effects of war, effects that are with us always and everywhere.

The book is positive and healing, but it is also realistic. It never becomes maudlin or descends into didacticism. It is beautifully written and on some pages borders on poetry. 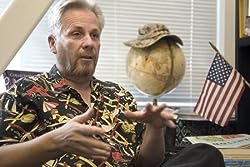 I loved the book and would use it in class if I were still teaching about the horrors of war.

Thanks to Bruce Solheim and Gabby Untermayerova for conspiring to produce this fine book dealing with the impact of war on the human heart.