Brian Kelly and Ingrid Smyer’s Proud to be a Marine: Stories of Strength and Courage from the Few and the Proud (Sourcebooks, 416 pp. $18.99, paper; $9.99 Kindle) is replete with Marine Corps historical accounts from before the Revolutionary War through today’s struggles in the Middle East. Some stories are well-known; many are not.

Kelly—a former editor of Military History magazine who teaches newswriting at the University of Virginia, and his wife Smyer, a free-lance journalist—are superior storytellers. Their writing is further enhanced by their dogged, in-depth research and their attention to detail. They also are the authors of the Best Little Stories series of history-based books.

Proud to be a Marine contains nearly eighty well-indexed short essays about Marines and the Marine Corps, arranged mainly in chronological order. It can be read leisurely, one story at a sitting, but I couldn’t put it down and read the book in record time.

To help new recruits build esprit de corps and self-confidence Marine Corps boot camp includes the mandatory study of USMC history. This training, plus a lifelong attachment to “Our Corps,” causes most Marines to believe we have a good handle on Marine Corps history. In this book, you are sure to expand your knowledge of that history.

Here are a few examples:

* Two Marine Corps officers who had fought side by side storming the Halls of Montezuma in 1847 found themselves fighting against one another in 1861 at the Battle of Bull Run.

* Lt. Gen. Victor H. Krulak, a veteran of World War II and the Korean and Vietnam wars, was a true visionary and possibly the most important officer in the history of the Marine Corps.

* Capt. Michael Capraro, Information Officer for the 1st Marine Division in Korea, proved the doctrine that “All Marines are, first and foremost, 0311 Riflemen.”

* Canadian-born Capt. Bill Dabney, a Vietnam War infantry officer, married the daughter of the legendary Gen. Lewis B. “Chesty” Puller (in photo below). How intimidating would that be, stopping by Chesty’s house to pick up his daughter for a date? 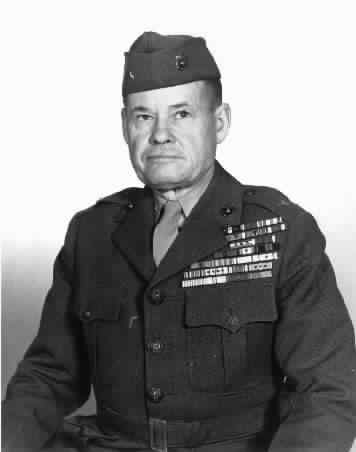 * Sgt. Dakota Meyer received the Medal of Honor for his heroic actions in Afghanistan. In this book we learn how he handled his call from the White House.

The final chapter, “And Never to be Forgotten,” contains abbreviated biographical sketches of twelve famous (and infamous) Marines, including John A. Lejeune, John H. Glenn, and even Lee Harvey Oswald.

Proud to be a Marine is an easy, enjoyable, and educational read for Old Salts and non-Marines alike.