In reviewing his earlier book, I said, “Apparently written mainly from memory, the book is jumpy at times, skipping from topic to topic like conversation in a bar. Nevertheless, its many stories are highly readable.” Collier’s new book has similar qualities: It kept me continuously entertained. Just about anywhere readers open the book, they will find an outrageous story filled with chills and thrills, laughs, or romance.

The first deals with Air America and, of course, the “secret” war in Laos. Collier flew there from mid-1970 to the end of 1972. Chapters such as “Sleeping in the Cockpit While Flying” left me nodding and smiling. Despite the book’s title, Collier tells interesting stories without giving away secrets about war-time air operations.

His flying stories do not reach the emotional intensity of his experiences as a rookie Marine pilot. Back then, when he proudly attained aircraft commander status, he wrote timeless lines such as, “I could now live or die by my own bad decisions.”

The second story line deals with the playboy activities of the well-paid Air America pilots. The men enjoyed long annual leaves and traveled internationally: Athens, Madrid, Lisbon, London, Miami, San Francisco, and San Diego once were stops on the same vacation. For shorter leaves, Collier and the other pilots stayed closer to home at Udorn, Thailand, as well  Bangkok, Hong Kong, India (visiting the Taj Mahal), Katmandu, and Sydney.

They did well with many of the women they encountered. Collier is man enough, though, to confess to times when he struck out. Primarily, the pilots shared mutual admiration, understanding, and satisfaction of physical needs with airline stewardesses.

Collier summarizes one vacation by quoting W.C. Fields. To wit: “I spent my money on whiskey and women. The rest of it I wasted.”

He validates his memory with three lengthy appendices: “The History of Air America: CIA Air Operations in Laos 1955-1974” by William M. Leary; Anne Darling’s “CIA Super Pilot Spills the Beans” from the 1972 premier issue of Oui magazine; and “Life and Death among the Hill Tribes” by Peter Aiken from a 1972 Lookeast magazine. 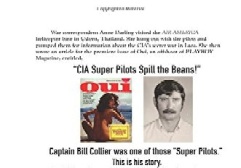 To wrap, Collier cites Anne Darling on the security of the Air America/CIA programs. She quotes a pilot who said, “The North Vietnamese know everything we’re doing. They’re not the problem. The security Air America is concerned about is being secure from the scrutiny of the American people.”

Even today, Bill Collier pretty much treats security in the same manner. Yet he still tells great stories about a war that never was.