Combat at Close Quarters: An Illustrated History of the U.S. Navy in the Vietnam War (Naval Institute Press, 2018, 360 pp. $39.95) is a compilation of essays on the topic edited by Edward J. Marolda. The five are all military historians who have written about the various aspects of the U.S. Navy’s role in the Vietnam War: Norman Polmar, R. Blake Dunnavent, John Darrell Sherwood, and Richard A. Mobley. The book also includes more than two hundred photos and maps.

Dunnavent is a Louisiana State University history professor who has done a lot of work on the brown water Navy in Vietnam. He and Marolda in 2015, for example, co-wrote the 82-page book, Combat at Close Quarters Warfare on the Rivers and Canals of Vietnam as part of the official “U.S. Navy and the Vietnam War” series, which Marolda co-edited.

Marolda served as an officer in the US Army’s 4th Transportation Command in Vietnam in 1969-70. A former Acting Director of Naval History and Senior Historian of the Navy, he is the leading historian of the U.S. Navy’s role in the Vietnam War.

The four chapters in this book chronicle:

One aspect of the war that these historians note is the stark difference between the strict Rules of Engagement promulgated by the Johnson administration in Vietnam and the more flexible ones that the Nixon administration used.

The book as excellent accounts of the heat and terror of battle. There are descriptions of aerial dog fights, rescues of downed aviators, and fighting along the rivers and marshes of the Mekong Delta. The book also explains how the war was orchestrated by its supporting players. There’s information on monitoring and interdicting movement along the Ho Chi Minh Trail; joining Intel efforts of the Army, Navy, Air Force, and Marine Corps into a single, cohesive stream of information; and behind-the-scenes communications, politics, and negotiation strategies. 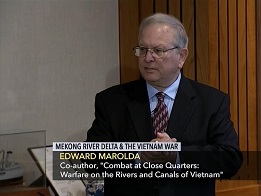 The authors argue that U.S. lost the Vietnam War because its citizens and politicians lost the will to fight it while the military forces consistently won virtually every battle.

Most Vietnam veterans know about actions in which they had participated. They witnessed and appreciated the close air support and the artillery and Naval gun fire, yet many are unaware of all the behind-the-scenes activities needed to make those long-range bombs so timely and so accurate.

To help learn how it all came together, Combat at Close Quarters is a must-read.