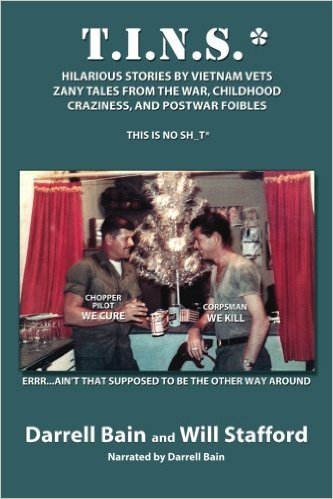 Darrell Bain and Will Stafford are Vietnam War veterans who found each other on the Internet and became computer pen pals. Their years-long correspondence resulted in Bain narrating and publishing most of those exchanges in a book called T.I.N.S.* (CreateSpace, 290 pp., $11.99, paper). The book’s cover tells us that T.I.N.S. is an acronym for “This is no shit.” Humor is the basis for every story.

Or, as the subtitle says: “Hilarious stories by Vietnam vets, zany tales from the war, childhood craziness, and post-war foibles.” The difficulties of childhood and teenage development, along with mid-life aging, dominate the storytelling. This made me feel shortchanged as problems related to marriages, dogs and cats, professions, food and dieting, illnesses, and smoking dominated too much of the text.

At times, these exchanges resemble a game of can-you-top-this. They heighten the entertainment, but also create scenarios bordering on repetitive and mundane chores familiar to most people.

I wanted to hear more about the military careers of Stafford and Bain. Both men spent two tours in Vietnam. Stafford flew helicopter gunships and Chinooks. Bain served as an Army medic. Their few stories about the Vietnam War and military life in general lift the book to a higher level. These stories also are humorous, but deal with activities, events, and places far beyond ordinary life.

Regardless of the topic, Bain–the author of Medics Wild!— generally plays straight man to Stafford and makes him the star of the book. Both men display highly perfected senses of humor.

Bain extends a caveat: “This book contains the complete and unabridged books, Toppers and More Toppers,” both of which he wrote. 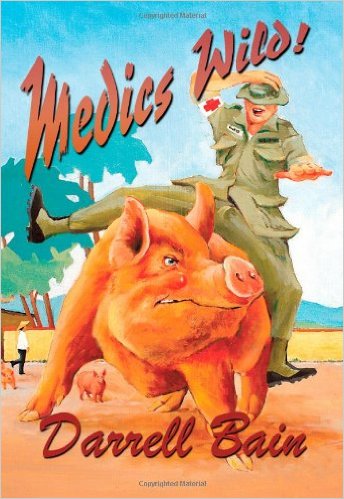 Bain offers an apology in his Preface: “For dramatic purposes, I took a few liberties with the actual organization of medical units in Vietnam, particularly with the chain of command.  My apology to the men and women who were in the medical units there and wore the patch of the 44th Medical Brigade.”

The first sentence of Chapter One, reads:  “In early 1968, the huge long binh compound, north of Saigon swarmed with activity.” Uh, oh, I thought, no caps on place names. That’s a red flag to me. I thought, “Is this going to be another half-assed, home-made book that will be agonizing for me to read?”

I decided to read to the end of the thirteen-page first chapter before I made up my mind. The garish color cover, which shows a cartoon medic riding a huge pink pig, combined with a title ending in an exclamation point already had set a comic tone in my mind.

I’m glad I did not throw the book against the wall and abandon it. Medics Wild! turns out to be a well-written, very enjoyable book about the 44th Medical Brigade. The characters are well developed and I learned a lot about what medics did in the Vietnam War. Bain has a gift for making detailed descriptions of medical procedures interesting and often funny.

He shows the reader what rear-area life for medics was like. He gives a nod to the often-told tropes of such novels, such as the barber who is also working as a VC, shit burning, SOS, and the fact that the children are the real losers in war. 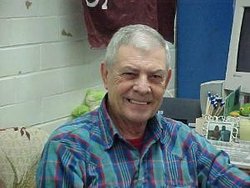 We learn that medics at this stage of the war, in the rear area, mostly dealt with drug problems, as well as with cases of the clap, syphilis, and venereal warts. Also skin diseases and the occasional cough and back pain.

We hear more than once that the politicians in Washington, D.C., refused to let the troops win the war. The implication is that it would have been easily done. The Khaki Mafia is discussed.

The book ends with the 1968 Tet Offensive. The medics who had been out of their heads on drugs get their act together and become responsible and do a good job with the wounded.

I enjoyed this book and recommend it highly to anyone curious about medics in Vietnam during this period of time. Not one page was boring.