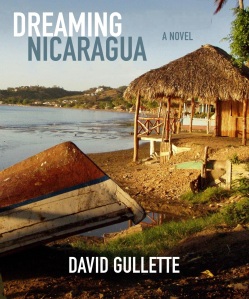 David Gullete’s first novel, Dreaming Nicaragua (Fenway Press, 257 pp., $18.50, paper), comes with a two-page loose-leaf set of instructions on how the book should be read.

Gullette is a Professor Emeritus at Simmons College, where he teaches English and literature classes. I found no information in the book or in the enclosed sheets about any military service in Vietnam or elsewhere.

We are told that Jesse Pelletier, the novel’s main character, is a Vietnam veteran, a Marine, and that the realistic portion of this novel takes place the summer of 2000 in San Juan del Sur, Nicaragua. Jesse’s old war buddy Tapper also appears in the story at several points and enlivens things for Jesse and for the reader.

The author cautions that parts of the novel have caused “some puzzlement, even befuddlement.” Thanks for that warning. I’m old and tired, so I took special care while reading this novel.

The cover did not cause me to expect much. It’s a color photo of a muddy, rocky beach, presumably in San Juan del Sur, Nicaragua. It doesn’t seem like a cover of a serious literary novel.

The book is filled with beautiful old images of Nicaragua torn from the pages of Frank Leslie’s Weekly that would have worked well on the cover. This cover looks like a travel book. It is, but just a little bit. Mostly it is not. Mostly it is about Yanqui incursions into Nicaragua from the 1850’s to the year 2000, from General Walker and Cornelius Vanderbilt to the Dry Canal.

A huge amount of the book deals with myriad plans to build a canal from the Atlantic to the Pacific Ocean across the isthmus of Nicaragua. Before I started reading this novel, I didn’t even know Nicaragua had a coastline, let alone two, and I didn’t know it was an isthmus. I couldn’t even spell or pronounce the word. Now I feel as though I’m a minor authority on the subject. My point: This book is not for those with an aversion to history, old maps, or lengthy quotes from old history books.

I loved  the book, even though in my six years of university life, I never took even one history or geography course. This book makes the subjects so interesting I found myself wishing I had. The author’s ploy of placing the “imaginary gringo” Jesse Pelletie, Selig-like at the center of Nicaraguan history worked for me. It was an involving way to bring alive those ancient days when Commodore Vanderbilt was fleecing thousands of California Gold Rush-bound pilgrims

Once the reader gets past the possible confusion that the novel contains two characters who both have the name Jesse Pelletier, and that one of them is the “real” modern-day Jesse and that the other one is an alter ego Jesse, and gets into the back-and-forth rhythm of the switching narratives and the interruptive scholarly notes (and definitions and other fun experimental narrative devices), the reader can fully enjoy a book that has surprises and challenges on almost every page.

The author uses most every device ever used by any sort of a novelist to tell his story.  One of the oldest is in the form of letters—epistolary.  Gullette bills his novel as “The Illustrated Postmodern Historical novel” and he is right, but it is all of that and still fun to read.

I found the center of the novel, narrated in this epistolary fashion by Elden, the wife of a Gold Rush miner, George, to be beautifully done, enthralling and heart-grabbing, as she tries to make her way by boat and overland through Nicaragua to join George in California.  The letters are filled with the sort of closely observed details that could only have been seen by a person who was there then and up to her ears in bad food, insects, death by fever, and lies.

Another aspect of the novel that delighted this reader is the lists. There are dozens of them—perhaps hundreds—of all possible lengths and including dazzling images and odd and strange objects and notions. The author’s juxtapositions in these lists are the primary pleasure, and I’m tempted to include a list or two to support my assertion, but in isolation from the text, they might not amuse or amaze the reader.  So you can buy and read the novel, which, I highly encourage you to do.

Not since I read John Barth’s The Sot-Weed Factor decades ago have I found a novel that so brings alive a corner of history about which I had not bothered to give a thought. It is not fair or right that this novel is likely to languish without ever receiving a cult following or getting a sendoff from a notable publisher. But that is how things are these days for serious literary novels. We can only hope it finds a small niche so that it does not fade and die without a whimper.

Even though this is an experimental novel, it has a story, as well as strong and interesting characters that a reader cares about, and it doesn’t really need sheets of detailed instructions to be read with pleasure by a reader looking for an exotic escape on a rainy day.

I’m a Vietnam veteran father of a college-aged daughter, so when Jesse’s previously estranged daughter, Suzy, appears in San Juan del Sur, I was prepared to enjoy the dramatics of a father getting one more chance to be a father to his only daughter. I was not disappointed.

Soon Suzy falls in love with Camilo Sanchez, “a high profile ecological agitator” who disappears after she has given him her heart, and is “presumed to be dead, somewhere in a ditch.” Or perhaps he’s holed up in the backwoods with one of his many lovers. This reader hoped he was but thought the “dead in a ditch theory” was a good one.

The book has a lot going on: a serial killer leaving dead bodies on the beach; a thunder and lightning storm at sea that leaves Jesse, the modern version, stranded in a boat with a couple of dubious characters; and a tidal wave that almost destroys the town.

There are some similarities to John Dos Passos’s U.S.A. Trilogy in the use of collage, but I find this book much more of a delight to read. One of the blurbs calls it a tapestry, but tapestries are static and this book is anything but that. It moves on every page. I kept reading it for a lot of reasons, but mostly because I wanted to find out what was going to happen to the characters I cared about.

I was happy that the book did not go on about Vietnam veterans being labeled baby killers, but Gullette does deal with Vietnam veterans coming out of the war “feeling harassed by American history,” and suffering from “Nam heebie-jeebies.”  As a fellow-sufferer for many years, I related. When our hero intersects with the VA, the observations made are familiar ones. They do not help him.

As one more Vietnam veteran who still suffers from the “Nam heebie-jeebies” but who is doing just fine now, thank you, I loved this book and hope it will find a large and appreciative audience.

I want to make it clear to prospective readers how I feel about this book. I absolutely loved it. I loved both Jesse Pelletiers. I loved every other character, major and minor, good and evil, and I even loved Jesse’s ex-wife and her new husband when they showed up unexpectedly in Nicaragua.

I loved learning about Nicaragua—about its history, its flora and fauna, its customs and about the United States’ long entanglement with that country. The author managed the miracle of all of this without being didactic, boring or irritating. I take my hat off to him.

If I could travel, I’d get busy and buy a ticket to Nicaragua, and I’d make reservations at Jesse Pelletier’s cheap beachfront hotel, Ospedaje Gringo Pinolero, in San Juan del Sur.  But my traveling days are done, so I give thanks to David Gullette for enabling me to make this exotic journey without my leaving my Zero Gravity chair here in Maple Valley, Washington.

Reading this book brought me back, magically, to when I was ten years old in Yakima, at the old Carnegie Library reading travel books and dreaming of exotic lands that I would travel to in my adulthood. The only exotic land I made it to was Vietnam, with the help of the U. S. Army. Now with the help and genius of David Gullette, I have made it to Nicaragua.

For info on ordering, go to http://fenwaypress.wordpress.com/dreaming-nicaragua