The velocity of events in 1968 are staggering. Their importance is underscored by the need for only a word or a phrase to appreciate their significance. The events remain not just historically important, but cultural touchstones. Tet. LBJ not running. MLK in Memphis. RFK at the Ambassador. Chicago Democratic Convention. Columbia University sit-in. Nixon’s comeback. Earth rise aboard Apollo 8.

In the midst of this upheaval, America not only elected a new president, but also witnessed a change in how the candidates were chosen—and the birth of a profound realignment of the party system.

Aram Goudsouzian, a University of Memphis history professor, examines the eight men who vied to be the next president in The Men and the Moment: The Election of 1968 and the Rise of Partisan Politics in America (University of North Carolina, 240 pp., $25). This brisk and accessible (147 pages of text) study focuses on the character of the candidates and their responses to the moment.

Despite its brevity and its heavy reliance on secondary sources, the sixty pages of end-notes evince the book’s meticulous research. Goudsouzian leans particularly on contemporary articles from the New York Times, Time, U.S. News & World Report, and Newsweek, among others.

The 1968 political cycle marked the final stand of the political machines in choosing a candidate. Strong showings and even victories in the primaries did not translate into delegates, as the party leaders had the ultimate discretion in choosing their candidate. This fact cannot be emphasized enough, for despite Eugene McCarthy’s quixotic insurgency, Robert Kennedy’s star power, Nelson Rockefeller’s muddled efforts, and Ronald Reagan’s patient opportunism, the eventual candidates always were likely to be Nixon and, after LBJ’s decision not to run, Vice President Humbert Humphrey because of their work in securing the delegates.

Even though he announced he would not run, Lyndon Johnson remained the de facto leader of the Democrats, which meant that Humphrey’s delegates were actually Johnson’s, effectively handcuffing Humphrey’s campaign. Mixed into this mélange was Alabama Gov. George Wallace, who ran one of the most successful—albeit the most despicable—third party campaigns in American history.

Goudsouzian proficiently explores each man’s character and ambitions, though the work’s concision and use of anecdotal evidence can at times veer into sensationalism. Were the Chicago police really chanting, “Kill, kill, kill” at the Democratic Convention? Did Johnson yank out his penis in response to a reporter’s question about why the U.S. was in Vietnam? Though entertaining, these seem apocryphal.

Goudsouzian proffers a fine analysis of the “New Politics” campaigns directed to the people through rallies and modern technology, but he all but ignores the critical William F. Buckley-Gore Vidal television debates. It is telling that Buckley is grouped in with the John Birch Society, the right-wing group he helped de-legitimize, and that there are more references to Stalin and Hitler (three) than to Vidal and Buckley (one).

The chapter on Nixon is, perhaps ironically, titled “The Loser,” and this moniker is repeated throughout the book. Goudsouzian frequently invokes Nixon’s use of the “silent center,” but Nixon did not use this phrase until November 1969. Though credited with the greatest comeback in American political history, there is perhaps too much presentism on Nixon, the eventual winner of this consequential campaign.

There is a reason that this is at least the fourth book in as many years devoted exclusively to the 1968 election. While the material is well trod, Goudsouzian has provided a useful perspective and enjoyable precis on the candidates and their times.

The first thing that came to mind as I pondered my reading experience with Nathan Hill’s The Nix (Knopf, 625 pp., $27.95), is the oft-used (but still prescient) line that Leo Tolstoy wrote in Anna Karenina: “All families are alike; each unhappy family is unhappy in its own way.”

This very long book is, at heart, a meditation on one very unhappy fictional family. To wit, a baby boom generation mother who has made a giant, stinking mess of her entire life and her adult son who is about to follow in her footsteps. Said messes include terribly unhappy childhoods, messy adolescences, and emotionally distressing adulthoods.

The mother in question, Faye Andresen, is brought up in a stifling Iowa town in the fifties and sixties and has a catastrophic, aborted college experience in Chicago in 1967 and 1968. Her son, Samuel Andresen-Anderson experiences a tortuous childhood, especially after his mother walks out on his family with no warning and for no apparent reason.

Samuel somehow survives his childhood and adolescent traumas, and becomes a college professor. The work is singularly uninspiring and Samuel descends into depressing—and countless hours playing some adolescent on-line game.

Then things go from worse to worse after Faye sort-of attacks a demagogic politician and Samuel has his entire world fall apart after an self-deceiving, selfish student falsely accuses him of mistreating her.

Hill spins out this yarn flashing back and forth in time, including a long section near the end in which Faye is caught up in the mayhem of the police riot during the 1968 Democratic National Convention in Chicago–which is where the Vietnam War comes in. That and a small part earlier in the book where Faye’s boyfriend back home wrestles with the biggest question that every male of that generation faced: what to do about the Vietnam War draft. 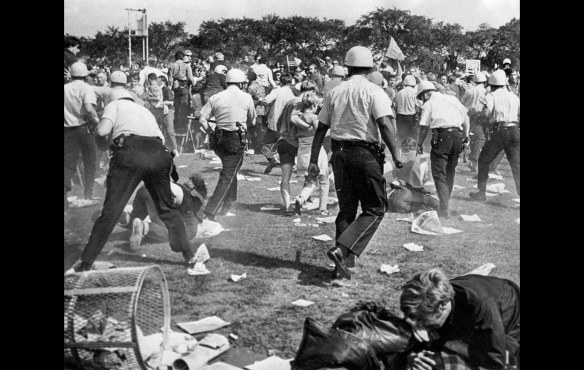 Hill is a more-than-capable storyteller and novelist. He brings his mostly over-the-top characters alive and created dizzying, almost-believable plots and subplots, often with ironic humor–and frequently with painful emotional and physical consequences for his characters.

His (almost literally) blow-by-blow rendition of the mayhem that occurred in the streets of downtown during the Democratic National Convention is intense–and probably (like the rest of the book) about twice as long as it should be.

That long set piece also is the vehicle Hill uses to let the reader know several secrets and to bring resolution of sorts to the careening lives of Faye and Samuel.

James V. Ventresco’s Arrow Moon: Reflections of the Sixties (CreateSpace, 288 pp., $11.50, paper) follows four college friends as they deal with the challenges of the sixties. Ventresco is enlisted in the Army to avoid being drafted. He served in Vietnam and received the Bronze Star, an Army Commendation Medal, and a Combat Infantryman Badge.

The four main characters seem to be there for every important event of the 1960s. And if they are not actually present, it is made clear that the events had a mighty impact on them. Probably the event that is presented most stirringly, and one that most of them experienced, is the 1968 Democratic National Convention in Chicago.

Matt Santorri seems destined for Vietnam, but the book quits before he gets there. I’d like to read a sequel in which he makes it to the war zone.

Dave, his slacker friend in college, never applies himself to his studies, so I thought he might get grabbed by the draft, but no such luck. He has bad eyes, and his trigger finger is damaged in Chicago by the police in the park.

AJ spends the novel busy making money selling rolling papers and marijuana. He already has served in the military, so he is home free as far as the Vietnam War is concerned.  Johnny, the boy from Texas, seems also headed for Vietnam at the end of the book.

Many of the minor characters have served in the Vietnam War or actually are there during the length of the book, so the novel has an important Vietnam War component. The war lurks on every page.

One character, for example, remarks, “he was sure the big capitalists and bankers were doing everything they could to keep the war going.”  Another says: “I’m really getting worried about that fucking Vietnam War.” He has reason to worry.

Iwo Jima gets a mention from a priest at the funeral of a Korean War veteran. The priest served as a chaplain during World War II and spent time with the Marines on Iwo.  “If Christ has wanted to remind us that there was a hell, Iwo Jima was his way of showing it,” he says. “Today we are sending our sons to Vietnam to fight godless communism. At what cost?”

I enjoyed this novel, but I believe it could have benefited from a few thousand more commas—not to mention more glue in the binding. By the time I finished it, I had a bundle of loose pages.

That being said, it is an enjoyable primer to the main events of the sixties and the impact they had on young men. I was a young man during that period, and most of the things covered in the book resonated with me.  If you missed the sixties, this would be a great place to start catching up.