“I’d rather be heard than comforted,” Nancy Smoyer writes near the end of Donut Dollies in Vietnam: Baby-Blue Dresses & OD Green (Chopper Books, 250 pp., $15.00, paper). By that point in the book, Smoyer has fulfilled that goal in this memoir that looks at her time in South Vietnam during the war and its aftermath.

The core of Smoyer’s book describes the pride and dedication she developed toward servicemen as a Donut Dolly in Vietnam in 1967-68. “I still refer to it as the best year of my life,” she writes, “and the worst.”

Smoyer was one of 627 women in the Red Cross Supplemental Recreation Activities Overseas program, which lasted from 1965-72. The largest number of women in-country at one time, she tells us, was 109 in 1969. All of them were college grads and volunteers. They inherited the nickname “Donut Dollies” from Red Cross workers who performed similar duties in Europe during World War II.

The women worked throughout South Vietnam. They took helicopter to the most forward positions. Their chores varied from serving 3:00 a.m. breakfasts to men girding for at-dawn assaults, to organizing C-ration picnics, to playing made-up games. Talking to the troops for any length of time, Smoyer says, “is the most satisfying part of the job. When we go to the field we just talk to the guys as they work.”

She was twenty-five years old. “We were there to boost the morale of the troops, plain and simple,” Smoyer explains. “Everything I did revolved around the men, and I don’t regret a minute of it.”

Being in-country and exposed to the same threats as the men in uniform, Donut Dollies encountered common war and post-war problems. After coming home Smoyer suffered PTSD, predicated on survival guilt, which was compounded by her brother’s death in action a few months after she returned to the United States.

On a visit to Vietnam in 1993, Smoyer says she overcame her PTSD by learning compassion for the Vietnamese—something that she had not allowed herself to feel before.

The second half of the book deals with post-war events. Many scenes involve emotional encounters at The Wall where Smoyer began serving as a volunteer guide shortly after its 1982 dedication. “Those days when emotions were raw, none of us knew how to act,” she says, “but we connected on such a deep and immediate level.”

Over the years, Smoyer extended her volunteer work to many other areas dealing with veterans. Serving in Vietnam gave her life its ultimate purpose. 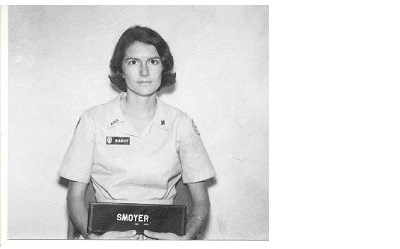 She closes the book with letters in tribute to her brother—a Marine lieutenant—from his teachers, coaches, and friends.

While telling her story, Smoyer makes references to the experiences of many other former Donut Dollies. She has maintained contact with them through email, letters, tapes, reunions, musings, and conversations.

Like Nancy Smoyer, they have a lasting commitment to helping veterans.

Smoyer is donating proceeds from the sale of her books to the Semper Fi Fund.