The basic premise of W.R. Baker’s Break in the Chain: Military Intelligence in Vietnam and Why the Easter Offensive Should Have Turned Out Differently (Casemate, 264 pp. $34.95, hardcover; $20.95, paper) is that the United States should not have been caught totally off-guard by the bold North Vietnamese 1972 Easter Offensive because U.S. intelligence operatives had provided warning indicators.

The book reads like a retrospective investigation into what transpired in the days leading up to the invasion and what continued to happen in the confusion that followed. What especially gives Bob Baker credibility is that he was an Army intelligence specialist in northern South Vietnam when the NVA’s major thrust came south across the DMZ.

This account is a strong indictment of incompetent senior South Vietnamese generals in key positions whose strong suit was political connections—not military skill. The book also calls into question the poor use of available intelligence by senior American leaders—both military and political—all the way up to the Nixon White House. What the generals reported as the offensive unfolded had little connection to the reality on the battlefield.

Baker points out that the intelligence community—especially it’s HUMINT (human intelligence) reporting—as often discounted by senior leaders, most of whom were in the combat arms arena. This reviewer, having served in both intelligence and combat, understands completely the points Baker repeatedly emphasizes—including that no military or political leader can afford to marginalize intelligence.

Conventional military wisdom dominated the thinking of the U.S. generals in Saigon, leading them to believe erroneously that an attack, if any, would come late in January during the Tet holiday, and that it would be made up of regiment-sized infantry units—and it would target the Central Highlands. Instead, the offensive came at the very end of March. And it was fought with infantry divisions (not regiments) accompanied by armor and artillery regiments and protected by anti-aircraft artillery and surface-to-air missiles. And it came south across the DMZ as well as from Laos and into the Central Highlands. The North Vietnamese, hoping to end the war on their terms, threw some 130,000 troops into the fight.

This book in particular illustrates that the history of battles gone wrong have repeatedly shared a common feature: discounted or ignored intelligence. Baker points out that intelligence had been disregarded prior to the Second World War’s Battle of the Bulge and the subsequent Operation Market Garden, nearly leading to disastrous consequences. And that the Bay of Pigs invasion in 1961 was undermined by ignored intelligence. Much more recently, a heavy price was paid for selectively discounting intelligence prior to the U.S. going to war in Iraq and Afghanistan. One hopes that the lessons in this book will help military and government leaders pay closer attention to intelligence and make the correct decisions in the future.

Break In the Chain is the book to read for an accurate picture of what really took place during the pivotal 1972 North Vietnamese Easter Offensive.

Retired Army Lt. Col. Thomas P. McKenna’s Kontum: The Battle to Save South Vietnam, which was published in 2011, is now out in paperback (University of Kentucky, 378 pp., $28). As we noted in our review four years ago, the book is a heavily researched, very detailed look at the 1972 North Vietnamese Army invasion of South Vietnam, better known as the Easter Offensive, which was designed to topple the South Vietnamese government and end the war.

The massive, three-pronged attack, aided by Soviet and Chinese weaponry, including tanks, came as the United States was rapidly withdrawing its combat troops under President Nixon’s Vietnamization plan. But tens of thousands of American troops, including South Vietnamese Army advisers such as McKenna, remained in Vietnam, and Nixon unhesitatingly unleashed American air power, including sustained B-52 bombing operations.

That onslaught overcame a less-than-stellar performance by many ARVN units, although the 23rd ARVN Infantry Division stood up well under 15-division NVA invasion. The ultimately successful defense of Kontum (and South Vietnam) was led by the legendary John Paul Vann, serving in a civilian capacity for the U.S. Foreign Service. 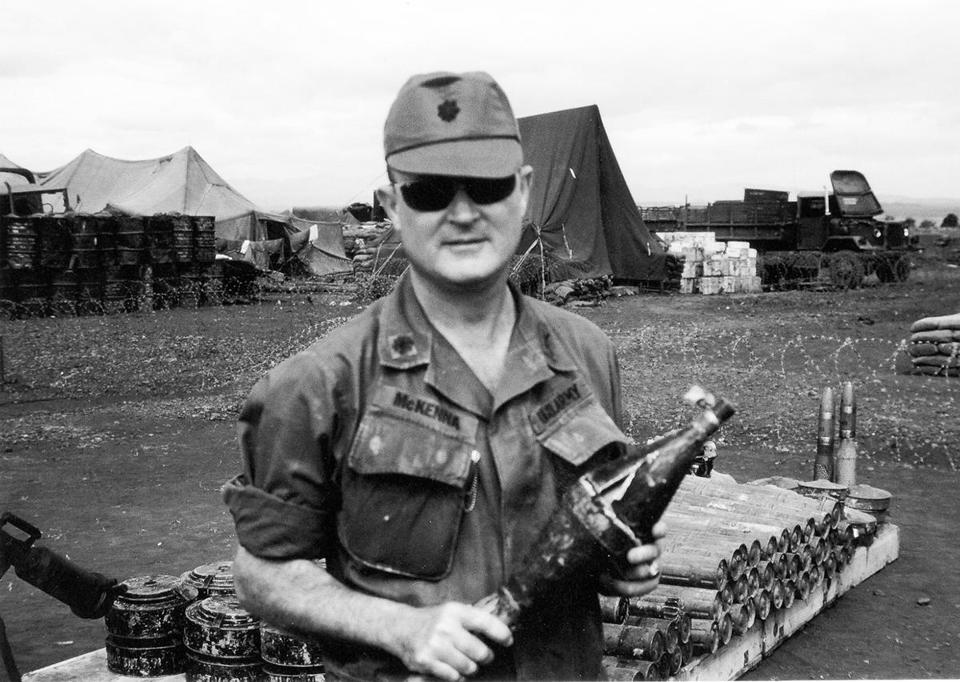 McKenna in Vietnam in 1971 with an enemy RPG warhead

McKenna, who was severely wounded near the end of the offensive, served under Vann (the subject of Neil Sheehan’s classic A Bright, Shining Lie), and offers an insightful picture of the colorful, contradictory ex-military man in action. McKenna also adds his own story into the mix, doing an effective job melding it into the bigger picture.

The book received the William E. Colby Award in 2013.