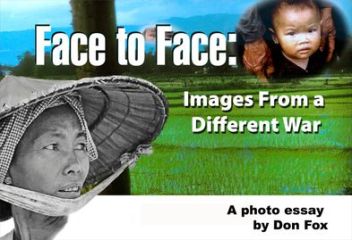 At first blush, it’s easy to dismiss Don Fox’s Face to Face: Images from a Different War (Old Goat Press, $35, hardcover; $20, paper), with its uninspired cover montage and the erratic quality and sizing of the photos. Easy to dismiss, that is, as another in a crowded field of ill-conceived self-published books of war photos.

It’s not. The book is a masterful meditation on War and the Other. Don Fox, a VVA life member, grew up in rural Pennsylvania. The Vietnam War provided his first look at a different culture—a culture that clearly mesmerized him when he served a year in country in 1966-67.

The 19-year-old Fox—a “Good Morning, Vietnam” disc jockey on Armed Forces Radio in Saigon—spent untold hours on the streets photographing its inhabitants. But when he returned to the States, he put several hundred Ektachrome slides in a cardboard box and stored them in the basement. During his life’s moves Fox always took that box with him, but somehow the slides wound up in the basement. Half a century later, when he finally opened the box, Fox found that his slides were badly damaged. Mildew had eaten into the film emulsion of many; others were water stained.

But what surprised Don Fox is that he remembered each shot: the place, the situation, his intention, his shyness, his excitement. He realized, too, that the images had been percolating in his head for all that half century. He had never really left them behind.

So he spent a year laboring to restore images and assemble them into a book. The restorations were uneven, yet curiously even the ravages of time and neglect have somehow been incorporated into the images. As Fox writes in his Epilogue, this book is the work of two photographers. One is a “naïve, fresh-out-of-high-school soldier”; the other, a “world-weary retired English teacher.”

The result is a beautiful album arranged in a straightforward format: photographs on the right, brief commentaries on the left-hand pages. Often the remarks are Fox’s own reflections. Other times, he’s employed the crystalline thoughts of others, such as the novelist Tim O’Brien and the Buddhist monk Thich Nhat Hanh.

For example, Fox presents a photo of woman in front of a collapsible gate with her face illuminated by a single ray of light. The facing page quotes the 18th century Vietnamese poet Nguyen Du: “Alone, in silence, she beheld the moon,/ her heart a raveled coil of hopes and dreams.”

There are more than two dozen photos in this slender volume, including several I could live with for a very long time. One is of an innocent, curious child in a crowd looking back at the photographer while everyone else is concealed by scarves or conical hats.

Another is a child held on the shoulders of an old man. “At first what caught my eye was the contrast between the old man’s gnarled hands and the smooth face of this little girl,” Fox writes. “But the true contrast is seen in the young child’s ancient eyes.”

In yet another remarkable photo a woman carries two huge pots with a shoulder pole, her face obscured. The background is a gated storefront. Her belly is swollen with child.

“And when I see the sun reflecting off her conical hat,” Fox writes, “I see her halo.”