Mark Anthony Sullivan served in an Americal Division field artillery unit in Vietnam. In Sullivan’s Firebase: A Novel of Wartime Suspense and Romance (306 pp., $14.75, paper; $5.99, Kindle) the main character, Mike Ward, also serves with that unit at a forward firebase.

Ward arrives in the Vietnam War zone as troop withdrawals are in full swing with the Nixon administration’s policy of Vietnamization. It’s May 1970 and Ward is in the middle of a breakup with his longtime girlfriend who thinks that he should have stayed home and been a good boyfriend. That’s how she sees life.

Mike Ward had the option of serving in an Army Reserve appointment. His high morals caused him to see that as a copout, so off to Vietnam he goes.

He gets assigned to the 23rd Infantry Division (the Americal) out of Chu Lai. He doesn’t realize until later that that’s the Americal’s numerical designation. The book provides much detail of what the life of a Spec. 4 assigned to field artillery in the Vietnam War is like.

There’s also a lot of detail about the girl he left behind and her anger at him for choosing the Army over what she saw as his obligations to her. The entire novel is told in letter format and Sullivan makes it work well. He tells us that he had plenty of letters to work with and that he relied on them for information, tone, and other details.

His evaluation of our efforts in Vietnam is simple: “We’re going absolutely nowhere.” The difference between the Vietnam War and World War II makes it difficult for the characters to see progress. No land is captured and held. A war measured in body counts seems to be a war with no progress.

The Paris Peace Talks are discussed and dismissed as pointless as the participants could barely decide on the shape of the table, let alone on anything of importance.

John Wayne gets a mention or two, and shit burning is discussed, as does Agent Orange. My Lai also comes up, as it was attached to the Americal Division in peoples’ minds. Even though it took place when our main character was home in law school, he somehow gets blamed.

There is a lot of ill feeling aimed at soldiers serving in the war. The notion seems to be that if they only chose not to go into the Army, there’d be no Vietnam War. As if it was that easy. 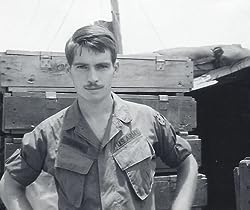 This is a serious novel, well-written and well-organized. It has an ending unlike any I’ve encountered  before in Vietnam War fiction. Mike Ward’s girlfriend manages to redeem herself, at least in my eyes, by doing something that doesn’t just border on magical realism, but tests my brain in all possible respects. I won’t spoil it for the prospective reader.

Suffice it to say that the ending took my breath away. I read it over and over again, trying to get it straight in my mind. I never did manage to wrap my mind around it.