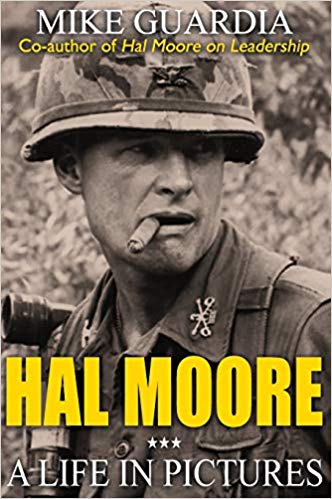 The journalist and former Vietnam War correspondent Joe Galloway gave legendary status to Lt. Gen. Hal Moore by joining with him to write We Were Soldiers Once… and Young: Ia Drang – The Battle That Changed the War in Vietnam (1992). Hollywood turned the book into a popular movie starring Mel Gibson as the general and sanctified Moore’s leadership.

Military historian Mike Guardia, who serves as a Captain in the U.S. Army Reserve, further fortified Moore’s stature by writing  Hal Moore: A Soldier Once… And Always in 2014 and Hal Moore on Leadership: Winning when Outgunned and Outmanned in 2017. His latest book is Hal Moore: A Life in Pictures (Magnum, 192 pp. $27.95, hardcover; $25.95, paper; $7.99, Kindle).

Guardia calls his new book “the definitive biography of this revered leader,” who died in 2017, two days short of ninety-five years of life. With nearly three hundred photographs, many of them “never-before-published,” Guardia says, A Life in Pictures leads the reader through the stages of Moore’s life:

The nearly sixty photographs from the Vietnam War interested me the most. They primarily focus on the 1965 Battle of Ia Drang in which Moore led the 1/7th Cavalry. Captions provide concise accounts that show Moore’s commitment to his men. They also emphasize his remarkable ability of leading from the front, particularly throughout the 1966 search-and-destroy Bon Song Campaign.

The overall effect of the book created a strong admiration within me for Hal Moore’s life and career. Before opening the book, I anticipated seeing a bunch of pictures of soldiers standing around in uniforms. Instead, I met the memory of a man filled with compassion for his troops. Moore’s humility overwhelmed me. For example, the press’ comparing him to Gen. George Patton “horrified him,” according to Guardia. Perhaps best of all, Hal Moore had a sense of humor.

Guardia is an avid fan of Hal Moore, but he portrays Moore’s behavior in war and peace with low-keyed vignettes that fully justify the general’s legendary recognition as a soldier’s soldier.