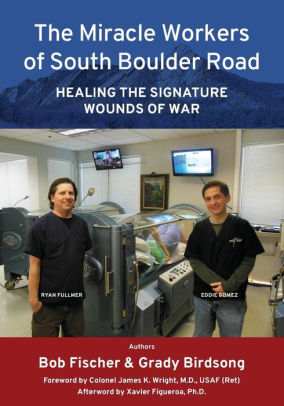 “It looks a lot like a textbook,” my wife Jan said while thumbing through The Miracle Workers of South Boulder Road: Healing the Signature Wounds of War (Bird Quill, 199 pp. $19.95, paper; $4.99, Kindle) by Bob Fischer and Grady Birdsong.

“Maybe,” I told her, “but it’s filled with information that touches your heart.”

The book pays tribute to a treatment program run by the Rocky Mountain Hyperbaric Institute in Boulder, Colorado. The book’s most significant picture is of a gray brain with a Purple Heart medal affixed to it because hyperbaric oxygen treatment (HBOT) helps war veterans with traumatic brain injury and post-traumatic stress disorder.

As my wife noted, the book contains charts and photographs, almost like a textbook. It also has “Exhibits” that illustrate the need for—and effectiveness of—HBOT.

Fischer and Birdsong, Marine Corps Vietnam War veterans, bring the text alive by describing the people who run the program and those who have benefited from using it their own words. The miracle-working heroes of the story are Ryan Fullmer, Eddie Gomez, Dr. Julie Stapleton, Pepe Ramirez, and their team.

Both Fullmer and Gomez suffered physical problems that HBOT cured, which motivated them to join forces and establish a clinic to perform feats similar to those that saved their lives. The authors helped find funding for starting a non-profit clinic. The clinic has treated hundreds of veterans.

Stapleton, a Certified Hyperbaric Physician, joined the group in 2007 to fulfill government regulations. She champions the use of HBOT to treat those with PTSD, although neither the Department of Defense nor the FDA endorses the concept. The VA recently announced that it would offer HBOT for PTSD patients.

Fundamentally, HBOT replaces the unsatisfactory array of drugs (and even career-ending brain surgery) routinely provided by VA hospitals as treatment for TBI and PTSD. Autobiographies of veterans who found renewed life through HBOT testify to its success. 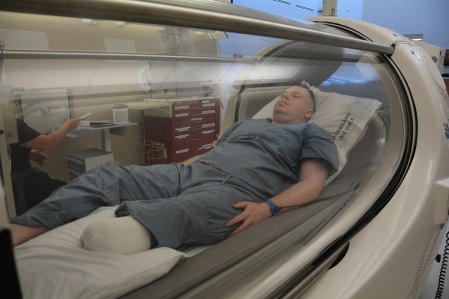 As treatment for combat injuries, HBOT is a relatively new form of medicine. I knew nothing about it prior to reading The Miracle Workers of South Boulder Road. As I said earlier, the book touches a reader’s heart. It is written by and about people who possess faith and perseverance in their cause.

The authors walk the reader through HBOT from start to finish and explain every step along the way. I doubt that you can find a better source to begin your education in this area.