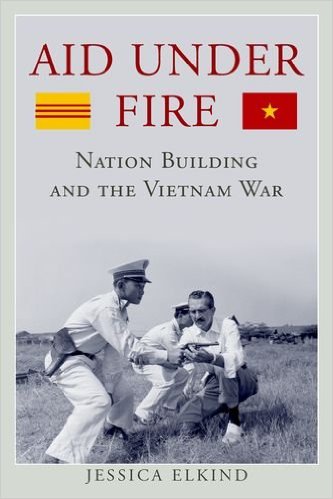 Nearly half a century after the fact historians face the formidable task of finding a way to analyse the Vietnam War from new perspectives. Several recently written books have approached the war by examining the political climate during the years between France’s departure from Indochina and the start of the American war there—approximately 1954-65.

Jessica Elkind’s Aid Under Fire: Nation Building and the Vietnam War (University Press of Kentucky, 310 pp., $45, hardcover, $45, Kindle) fits into this category. A San Francisco State University history professor, Elkind teaches and writes about American foreign relations, the Cold War, and Southeast Asia. Her next book will examine U.S. involvement in Cambodia in the 1970s.

Elkind bases parts of Aid Under Fire on interviews with civilian aid workers that offer new conclusions about old discussions concerning the effectiveness of non-military nation building. Elkind provides a long introduction that includes other historians’ perspectives of the world’s political picture pre-1965. The consensus is that nation building failed to make South Vietnam independent because of misconceptions regarding historical, political, and social conditions. This background material is exceptionally helpful for following Elkind’s subsequent arguments.

The nation-building effort in South Vietnam failed, according to Elkind, because the Vietnamese did not support American geopolitical goals. That is, Americans confronted problems by applying western practices while overlooking the reluctance of recently decolonized Asians to accept them.

By dissecting five assistance programs, Elkind explains nation building setbacks in Vietnam. The five are: refugee resettlement, public administration standardization, land reform and agricultural development, police force modernization, and the creation of an educational system to advance counterinsurgency aims. Atop everything else, the U.S. supported a repressive regime. Consequently, the South Vietnamese rural population did not devote its hearts and minds to supporting an anti-communist cause, Elkind says.

At length, she delves into controversies such as “The Legacy of Colonialism” that segues into “The Political Burden of Being American,” which deals with Americans being stereotyped as “a rich man with a head full of race prejudice” who puts the government ahead of the people. Two of Elkind’s closing subtitles—”From Enthusiasm to Defeat” and “Ears of Stone”—indicate that the nation-building experiment might have been doomed from the start.

When President Kennedy issued an executive order creating the Agency for International Development (AID) in 1961, American leaders eagerly supported nation building, according to my memory. Almost immediately, my Air Force friends delivered supplies country-wide in C-123 Providers during six-month deployments. As the 1960s wore on, however, war demands consumed almost all other such USAF efforts. In 1968, my C-130 crew flew nearly eight hundred in-country support sorties. Only two in one afternoon questionably helped nation building when we relocated women, children, and old men who did not want to be uprooted.

Refugee resettlement from North to South Vietnam in 1954

Elkind describes similar patterns of activity and points out that, in all the intervening years, “nation building” has been thought of as “military modernization” for programs in Indonesia, Brazil, Iran, El Salvador, Iraq, and Afghanistan. The outcomes have been the same, she says.

Aid Under Fire is part of the “Studies in Conflict, Diplomacy, and Peace” series of books that examines—and mostly criticizes—the United States’ engagement with the world. The series includes the work of nineteen historians and other academics who think alike.

But to what purpose? I wonder why these folks do not organize and protest America’s endless involvement in the Middle East.