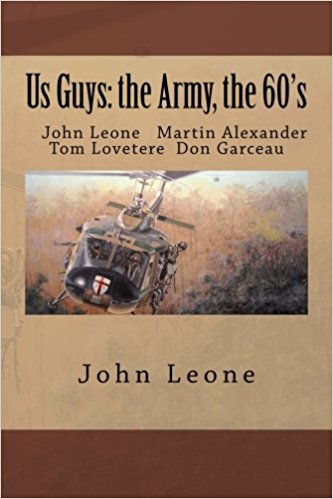 John Leone’s Us Guys: the Army, the 60’s (CreateSpace, 138 pp., $26.99, paper; $6.99, Kindle) is short, but well-written. Leone is a master of understatement, which serves to enhance his sharp wit. This nonfiction book is about four men who became friends fifty years ago after serving together in the Army: Leone, Martin Alexander, Tom Lovetere, and Don Garceau. They remain friends today.

Leone calls this a “scrapbook.” He says the stories in the book are not momentous, nor do they deal with calamities. They are about everyday things. There’s something poignant about everyday activities, though, when they are surrounded by war. The stories fasten on small transactions between different cultures in the war zone, memories, and experiences.

The four guys helped start the 187th Assault Helicopter Company, but were sent to different units when they arrived in Vietnam. Throughout the book, Leone talks about each man in individual chapters; there also are contributions written by each guiy

Leone has the ability to tell sharp, detailed narratives, most of which are funny. In the section about the Dominion of the Golden Dragon—the unofficial Navy award given to people on ships that cross the International Date Line—he writes: “To be sure, King Neptune was there with a beard looking astoundingly like a mop from the mess hall, as was Davy Jones, similarly regaled.” The rest of the story had me laughing out loud, as did the photo of the men and an official-looking crossing certificate. 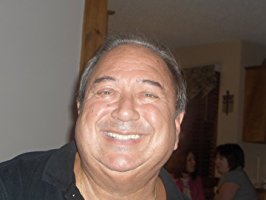 There are other photos of the guys, past and present, as well as images of helicopters, Vietnamese markets, and beaches.

Photos of Vietnamese coins and paper money at first appeared to be a yawn. But as I looked at them, I was transported to Vietnam. Handing a coin that has scalloped edges and exotic engravings to a person whose language you don’t know can last in the mind forever. Proust with coin, you might say.

Leone is offering discounted copies of the book (for $20) to veterans. For info on ordering directly from the author, email Johnleone1@verizon.com