Katey Schultz’s Still Come Home (Apprentice House Press, 241 pp. $26.99, hardcover; $16.99, paper; $6.29, Kindle) is a work of literary fiction. Many books are written by people who have a story to tell and do so the best they can. Schultz, on the other hand, is a gifted writer who focuses in this book on a three-day period in 2009 in Afghanistan and on three main characters.

Aasey, seventeen, lives in “a village the size of a flea” in the middle of a war. Three years earlier her entire family had been murdered, victims of false rumors, and she was forced into a rushed marriage to her father’s cousin. She feels trapped in a culture that forces her to dangerously push boundaries as she longs for more independence.

Rahim, Aasey’s husband, who is twenty-three years older than she is, finds himself working for—but not with—the Taliban. He’s torn between shielding his wife from the horrors he’s seen and dealing with her independent streak, which sometimes makes him want to “shove her into the wall.”

Miller is preparing to lead his men away from their routine of watching movies and playing pickup football games to one final humanitarian mission. His unit gets orders to drive their armored vehicles fifty kilometers across the desert to do something a helicopter drop could have handled in a few hours. But the Army knows you get a better sense of what’s going on in an area by being on the ground.

So Miller and his men prepare to go to the village of Inmar, Aasey’s home, just as she has become concerned about the Taliban’s renewed presence there. After all, it was the Taliban who “stole everything from her but her own heartbeat.” One bright spot in her life is the friendship she’s developed with a younger, mute orphan boy.

Miller has never gotten over the death of an NCO on a previous tour. He begins to question the rules of engagement and increasingly considers the brass to be giving orders for a different war than the one he and his men are fighting.

An old battered paperback copy of a Merriam-Webster dictionary becomes almost a character in the story and there is at least one major surprise.

It’s a shame that in the decades since the end of the Vietnam War, wars are still taking place for people to write about. On the other hand, it’s a blessing that we have novelists like Katey Schultz to tell stories of those wars in an enlightened and empathic manner. 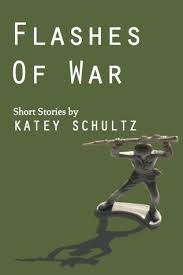 Katey Schultz grew up in Portland, Oregon. She says in her book’s Epilogue that she has “no immediate ties to the military.” After reading her Flashes of War: Short Stories (Apprentice House, 188 pp., $16.95, paper), that’s pretty clear.

In her Acknowledgements, Schultz indicates she made a serious effort to get military details right. She thanks Sergeant First Class Warren Bockhol ”for weapons accuracy and his description of a Forward Operating Base.”  She also thanks Doug Stanton for his book, Horse Soldiers, and Karen Button, a former war correspondent.

Reading the Acknowledgements made me eager to see how this research and her thirty-one months of traveling the United States while writing the book, showed up on the page.

The military false notes that hit me are minor ones, but they did bother me a bit. In the story “The Ghost of Sanchez” a “team of Marines repelled off the sides”  The correct word is “rapelled.”  In “Deuce Out” in an Army recruiter’s office a female sergeant calls another sergeant “Sir.” Unless she was being ironical or sarcastic, no sergeant would address another as “Sir.”  Maybe the character was being sarcastic, but the usage still set my teeth on edge.

I don’t know how much research and travel Stephen Crane invested in Red Badge of Courage, but I suspect he listened to some tall tales from tobacco-chewing Civil War veterans. He wrote a great novel—a book for the ages.

This book has a great cover featuring a dramatic photo of one of those little green plastic soldiers that my sons played with when they were little—the ones that have their feet fastened to a bit of plastic so they can stand up.  This soldier appears to holding a rocket launcher over his head. He casts a big shadow, as does childhood play with such toys.

This motif is repeated throughout the book in tiny drawings as if to remind us of a connection between childhood toys and growing up and choosing to go to war. The global war on terrorism is what a character calls it in “Deuce Out.”

I counted thirty-one stories in this book. They are short, as the title indicates. The stories are an average of a bit over five pages each. Many are far shorter. For instance, the first one, “While the Rest of America is at the Mall,” is one page, plus three lines. It’s more of a prose poem than a story. It is made strong and memorable by its images. Bullets, for example, glitter “like Hershey Kisses.”

“Home on Leave” begins and ends with rhubarb pie and is note perfect in between. It’s a fobbit story, involving troops who don’t get out of their forward operating bases. These soldiers used to be called REMFs back in the day.  But the scorn that can come from veterans who saw lots of combat is still there and comes across full bore.

I found two important, overt references to the Vietnam War. One refers to the notion that in the ‘Nam you knew that things were about to get bad if the crickets stopped chirping. I always heard that referred to as frogs, not crickets. I never saw a cricket in Vietnam. They may have been there, but I never saw or heard them.

The second reference to the Vietnam War comes near the beginning of the last story, “The Quiet Kind.”  An “old-timer” wearing a Vietnam veteran’s cap and limping “like his right side carries half a pound of shrapnel” enters the hardware store where the story’s hero Nathan works. The old vet buys some “Torx head screws” and some “hurricane brackets” from Nathan, a recently returned veteran. After buying the stuff the vet mentions to Nathan that he saw Nathan’s picture in the paper and he welcomes him home. Nathan says, “Thank you, sir.”  But the Vietnam veteran does not stop there.

I feel that his next comment is meant to be negative, a putdown to Nathan, a trivializing of his war experience. The gimpy Vietnam veteran says, “That’s a different war over there now, isn’t it?  GPS units and NVGs.”

There is no more conversation, just a shrug from Nathan and Nathan’s thoughts that are shared with the reader. No thoughts about the Vietnam veteran—only about coming home and what a farce it was. The old-timer leaves and someone asks Nathan how many tours the old-timer might have had done. Nathan says that it was hard to say, “a lot kept going back.”

The other guy says, “We’re all glad you made it back in one piece,” and tells Nathan how much better he looks than the old-timer. Nathan thinks about what this means, but maintains a calm exterior and thanks the guy.

This scene is all about appearances. Any Vietnam veteran knows that the old-timer might not have served multiple tours. Maybe he was there a few days when he got hit. Or maybe the limp is due to a hunting accident or a motorcycle accident after he got back. Maybe he had polio as a kid. Maybe he did serve in the military, but didn’t make it to Vietnam, and he wears that Vietnam veteran cap wrongly, a sort of “Stolen Valor” thing. Anything is possible. We’ve encountered it all.

We never see the old-timer again in this story. After all, it is Nathan’s story.  We root for Nathan. We want him to rejoin his beloved wife and daughter and to have another child and for his life to be happy. We will never know for sure, but this story leaves us with the sense of that possibility. Most of the stories in this book don’t kid us with hope.

The thirty-one stories are all over the place, representing much more than just an American veteran’s point of view, such as Nathan’s. We hear from soldiers‘ wives and widows as well, and from the “enemy.” I was reminded of stories in Robert Olen Butler’s book, A Good Scent From a Strange Mountain that inhabit the consciousness of Vietnamese refugees in the United States. A few stories in this book also are successful with that method.

One of Schultz’s stories that haunts me is “Deuce Out” told from the point-of-view of Steph, the kid sister of Dustin, who has shipped out for Afghanistan. Steph wants to join him there, so she lifts weights, trains hard, visits recruiters, and chooses as her MOS one that involves combat support. She gets what she wished for.

The story is told from beginning to end, quite powerfully, from Steph’s innocent point-of-view. This is a story I’d like to require any young woman (or man) to read before she or he visits a recruiters’ office. This is the ultimate gloom-and-doom story, told calmly and matter-of-factly.

In “Stars Over Afghanistan,” told from an Afghan point-of-view, the phrase  “this endless war” is used. In another story, Americans are referred to as invaders. I can see how Afghans might think of war as endless, just as I can see how Americans hardly know we are at war, unless they are at the airport taking off their shoes. The title of the first story in this collection sets that tone: “While the Rest of America Is At the Mall.”

We can be oblivious because the impact on us is low. Only by making this book of stories mandatory reading can Americans become aware of the butcher’s bill of war. The cost is high, but it is mostly out of sight and mind, unless you choose to ruin your day by visiting a VA hospital or by reading these stories.

Schulz made the effort to break out of her life for thirty-one months to find out “the impacts of war inside the family home” and in “the far reaches of an individual’s mind.” We should honor her efforts by reading her book ,which bears “witness to the complexity of hope and suffering.”

That’s from the Epilogue. I saw far more suffering than hope in these stories, but it is something we need to see. Perhaps it is my Vietnam War heebie-jeebies. You be the judge.