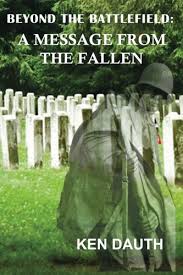 Ken Dauth is a Vietnam War era Navy veteran who lives in Sedona, Arizona. He has retired from a career of programming and “is living his lifelong dream of writing.”

As the title, Beyond the Battlefield: A Message From the Fallen (All Things That Matter Press, 16.99, paper), indicates, Dauth has written a ghost story. The blurb on the back of the book tells us: “The war dead have a message. Why are the dead not resting in peace?”

This short novel answers this question in a series of short chapters. The book is a handsome volume with a striking cover of a blurred soldier in battle garb, with a field of tombstones behind him. I wish the text had been as well-edited as the cover was well-produced.

The Vietnam War gets a name check deep into the book (on page 91, to be precise), along with Bosnia and Desert Storm. Near the end, there is a section in which ghosts from most of the world’s wars start appearing in public. These ghosts have the same message, that war has not worked and that we must try something else. The world is “spooked by spooks.”

The President of the United States and various military officers get involved in an attempt at an investigation and a cover-up. These ghosts are soldiers who had been killed in action, and at first they are returning to “ease their loved ones’ grief.” They also appear in hospitals in full dress uniform to watch over their suffering comrades. The returning war dead create a PR problem for war. Television news reports of war dead walking the streets of Seattle in full dress uniforms unnerves residents.

I won’t give away the ending, but this is a book with a strong message. It is a message delivered with passion and with terse, effective language. A summary of the book’s message might be: War doesn’t work; 10,000 years of slaughtering each other has proven that.

Ken Dauth has written a powerful antiwar story. I hope that his message gets across to somebody in a position to stop America’s commitment to endless war.