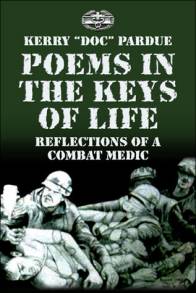 Kerry “Doc” Pardue is a 100 percent service-connected disabled veteran. He is a former combat medic who served with the Scouts in the 2/47th Infantry of the 9th Infantry Division in Vietnam from March 1968 to March 1969.

He tells us that he began to write poetry “to bring about healing” and “to deal with PTSD.” And that he learned two things in Vietnam: Men will die, and no matter what he did, he couldn’t change that. His writings have taught him, Pardue says, that “we did the right thing by going to Vietnam.”

When Kerry Pardue received his notification to report for his physical, he decided “it would be better for me to pick my field rather than be on the front lines as an infantryman.” Why he assumed that would happen, he doesn’t explain. The recruiter suggested that he go for medic training, and that most likely he’d be stationed in some nice hospital. Sounds perfect, doesn’t it? The recruiter didn’t inform Pardue that medics also served with the infantry in the thick of the fighting.

As a result of his decision to become a medic, the poems in Poems in the Keys of Life: Reflections of a Combat Medic (PublishAmerica, 100 pp., $29.95, hardcover; $14.99, paper; $9.95, Kindle) are not about serving in that nice hospital, but about combat. There are titles such as “In the Heat of Battle,” “Playing Chicken with Mortars,” “Gooks in the Wire,” and “Daddy, Why Didn’t You Tell Me About War?”

May your turkey be plump

Your potatoes without lumps

Your gravy nice and smooth;

And may your pumpkin pie

Stay off your thighs

I wish all Vietnam War poetry was this straightforward. It is not.

I respect honesty and good old American values. That’s what the reader gets in this small book of poetry.