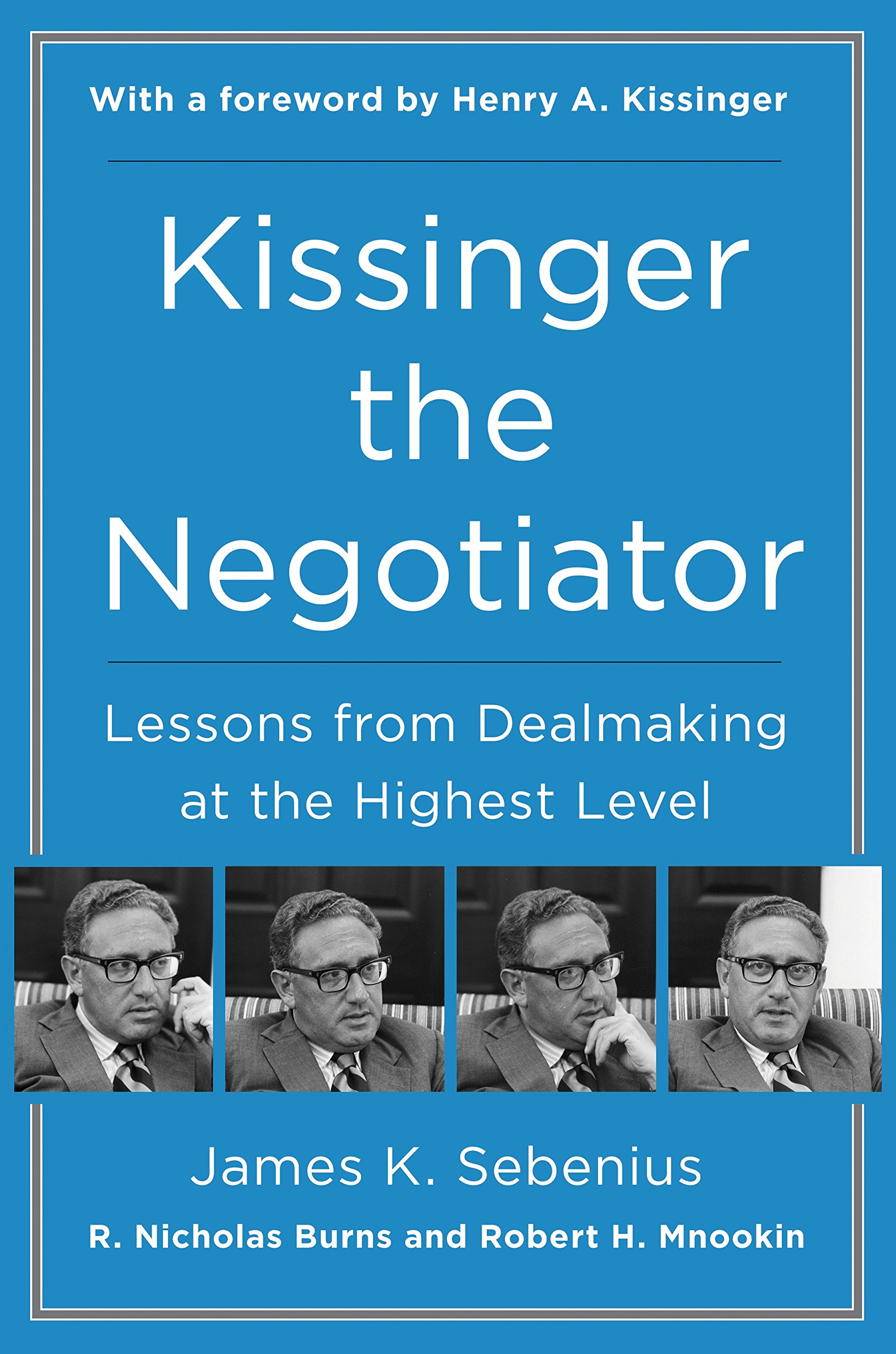 Lauding Henry Kissinger is the primary purpose of Kissinger the Negotiator, which carries the subtitle tease, Lessons from Dealmaking at the Highest Level (HarperCollins, 448 pp.; $28.99, hardcover; $17.99, paper; $14.99, Kindle). After studying “many of the world’s most impressive negotiators,” the authors (all Harvard professors) classify the controversial Kissinger as “a breed apart.”

The authors—James K. Sebenius, R. Nicholas Burns, and Robert H. Mnookin—are experts in negotiation, diplomacy, and law. They allowed Kissinger to write the book’s forward. In it, he lauds the authors for being the first, to his knowledge, to “seriously analyze” his “most effective strategies and tactics to address different challenges at the table.” This then is the book’s “central topic,” he says, which makes it “unique.”

The authors dissect Kissinger’s most formidable negotiations by beginning with what they call the “forgotten case” of South Africa in 1976. Then they work their way through Kissinger’s involvement in the Vietnam War, with U.S.-China relations, the Cold War, and the 1973 Arab-Israeli War. They find “a great deal to admire and several aspects to question.”

The concluding chapter offers fifteen “Key Lessons on Negotiation from Henry Kissinger” and provides a checklist to use if you’re ever bargaining across a table. Which begs the question: What happens when your opponent has a copy of the list?

The checklist rewords old practices and self-evident truths. It reminds me of military school handouts that address concepts of leadership: “Know your job” was the first principle of those schools. This book gives similar advice; to wit: “Develop deep familiarity with the subject of your negotiation.”

The professors add a caveat, however, for leaders who negotiate in areas in which they lack knowledge: “Make sure that your team possesses this knowledge.” Do they mean “Know yourself and seek self-improvement,” which has been taught to soldiers, sailors, airmen, and Marines for ages?

What the authors call the book’s “key lessons,” therefore, are not new. In the situations cited, they were effective because of Kissinger’s skill in choosing and applying established tactics. For example, the authors emphasize Kissinger’s talent for “zooming out” to set strategies and “zooming in” to contend with difficult opponents.

The authors describe the miasma that engulfed Kissinger in making Vietnam War policy. “No,” they say, was the operative word from everybody he encountered: the U.S. Congress and public, North Vietnam’s Le Duc Tho, South Vietnam’s Nguyen Van Thieu, and Chinese and Soviet diplomats. Even West German officials added to the discord. 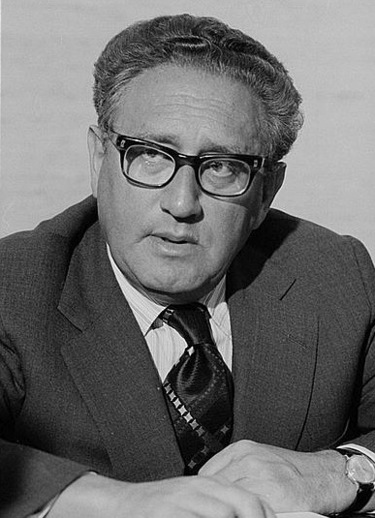 For years, Kissinger pursued America’s Vietnam War goals for good or bad despite Richard Nixon’s showing his hand by withdrawing troops starting in 1969. The authors classify Kissinger’s early bargaining position with the North Vietnamese as “weak.” But his determination was formidable, they say, in pursuing tasks bordering on the impossible.

While reading about Kissinger versus the North Vietnamese, I kept thinking that he could have stayed home if a president had targeted B-52s over Hanoi seven, or even five, years earlier.

With more than one hundred of the book’s pages devoted to notes, bibliography, and index, arguments about negotiation techniques fill less than three hundred pages. Nevertheless, the book provides interesting views of history and Kissinger’s role in the action.

Four minutes before six o’clock on the morning of January 28, 1973, I awoke in my Tan Son Nhut BOQ room when four mortar rounds hit the base. We were six hours ahead of Greenwich, where it was nearly midnight and the start of the ceasefire designated by the Paris Peace Accords. No further rounds followed, but Big Voice kept ordering people to shelters. I rolled over in bed and smiled.

The North Vietnamese were telling us that they hadn’t quit, I thought with a touch of admiration. Two years and three months later, the NVA rolled into Saigon.

Events that led to that morning and followed it are the subject of The War after the War: The Struggle for Credibility During America’s Exit from Vietnam (Cornell University Press, 231 pp.; $45) by Johannes Kadura. The story revolves around the Indochina endgame strategy employed by Presidents Richard Nixon and Gerald Ford with counsel from National Security Adviser/Secretary of State Henry Kissinger.

Nixon and Kissinger, Kadura explains, used two basic plans to counterbalance defeat in Indochina and simultaneously preserve presidential credibility as an opponent of communist expansion. They called their plans “equilibrium strategy” and “insurance policy.” Kadura discusses the plans and then offers his “new interpretation” of what occurred during the years immediately before and after the signing of the Peace Agreement in Paris. He focuses on the U.S. perspective and does not attempt to tell the Vietnamese version of the story.

The book is a masterpiece of research that is carefully footnoted. Kadura holds a doctorate in American history. He studied at Yale and Cambridge. He is Managing Director of AKRYL, an Internet company based in Hamburg and Beijing.

After American forces departed Vietnam and our POWs returned home, Nixon and Kissinger “stressed the idea that the war in Vietnam had actually successfully ended,” Kadura says. “The implications were obvious: the United States had fulfilled its basic obligations and could focus on more important things; the South Vietnamese had to figure out the rest on their own.” Nixon and Kissinger soon shifted their attention to more critical international matters, such as the Yom Kippur War, the oil crisis, and relations with the Soviet Union and the People’s Republic of China.

The book convincingly argues that Nixon and Kissinger foisted the blame on Congress for America’s lack of post-1973 support for the vulnerable nations of Indochina, particularly when Congress reduced military and economic aid to those nations each year.

Nixon’s distraction by Watergate and his eventual resignation forced Kissinger to guide America’s foreign policy for a considerable period, Kadura says. Ford, however, proved to be his own man, no more so than when he pardoned Nixon. Ford, emulating Nixon, continued to blame Congress for Vietnam, Cambodia, and Laos ending up under communist rule.

The book presents information that filled gaps in my education. Like many people, I had stopped worrying about Southeast Asia in 1973. Material new to me included the fact that some 207,000 NVA regulars moved into South Vietnam after the signing of the Paris Accords; the North’s paving of the Ho Chi Minh Trail; and its construction of SAM sites at Khe Sanh and A Shau—all in preparation for its final offensive. I also didn’t know about Nixon’s gross failure to take decisive action against cease-fire violations and of the political machinations that led to the fall of Cambodia. Kadura’s history lessons ensure that the reader sees the big picture.

Overall, Kadura convinced me that among Nixon, Ford, and Kissinger, pessimism prevailed throughout the post-peace agreement period. Their goal had been to exit Vietnam without looking like they were running away (“peace with honor”), and they feared being accused of having done exactly that. Kadura barely mentions “peace with honor,” which was a byword of the era. He does discuss the “decent interval,” a goal that might have resulted in more favorable outcomes for Vietnam, Cambodia, and Loas. A two-year interval was not long enough.

The end of South Vietnam triggered a lot of soul searching in this country. Study groups from the State Department, Joint Chiefs of Staff, and National Security Council came up with conflicting summaries of lessons learned. Kissinger’s insistence that “Washington had bought vital time for Southeast Asia’s non-communist nations to develop” became a popular but questionable conclusion because America had not prosecuted the war with that goal in mind, according to Kadura. The “buying vital time” claim, however, reassured other allies that Washington would help them fight communist aggression.

Looking “beyond defeat in Indochina,” Kadura shows that America retained post-Agreement influence in Southeast Asia during the Mayaguez incident, as well as with our denial of help to Hanoi, and through worsening relations with China.

Kadura’s conclusion: “The overall effects of Washington’s defeat in Indochina were quite limited. The strategic balance did not shift decisively in favor of the Soviets or Chinese. Washington emerged tarnished yet relatively strong. Nixon, Ford, and Kissinger did manage to control the damage caused by the U.S. defeat.”

The book looks at the initial effort by President Nixon and his National Security Advisor Henry Kissinger to bring an honorable end to the war in Vietnam by trying to win concessions from Hanoi at the negotiating table through coercive diplomacy. This when the Madman Theory came about, with Nixon threatening excessive force, including possible nuclear strikes, to try to convince Hanoi and Moscow to end the war sooner rather than later.

Nixon started with verbal threats, then authorized bombing NVA and VC bases in Cambodia. Next came a ruse that the U. S. was planning to mine Haiphong Harbor. Planning for the nuclear option also started. That drastic step had been considered several times since World War II, including during the 1954 disaster at Dien Bien Phu when the French were begging for U.S. air support; during the 1958 Lebanon crisis; and during the Cuban missile crisis of 1962.

This book covers the Vietnam War year of 1969 month by month in almost mind-numbing detail. It focuses on what our nation’s leaders said to whom, and when and why they did.  The key players are Nixon,  Kissinger, Russia’s Anatoly Dobrynin, Secretary of State William Rogers, Secretary of Defense William Laird, and JCS Chairman Earle Wheeler.

What the authors reveal is the intense, behind-the-scenes plotting and planning that Nixon and Kissinger carried on in 1969 as they desperately tried o find a way to move the Vietnam War peace talks with Hanoi to fruition. Nixon and Kissinger resorted to playing “good cop–bad cop” with Dobrynin. Yet, always in the back of their minds was what they could do to make Moscow put pressure on Hanoi—but not go so far as to put the Soviets on the alert and escalate tensions between the super powers.

This book reveals Nixon’s negotiating strategy: talk tough, make threats, rattle sabers, then think better of the risks involved and back down. The reader or researcher hungry to know every last detail of the interactions between the aforementioned players will find this book satisfies that need and then some. The notes alone cover eighty pages. The bibliography runs sixteen pages.

Some sobering realizations came about as a result of the authors’ research. By 1969, Nixon and Kissinger—as well as the majority of Nixon’s inner circle—had decided that the war in Vietnam was unwinnable. The overlying principle motivating Nixon and Kissinger therefore was not how to win the war, but how to get our forces out without appearing to have lost. The aim of the North Vietnamese was to drag out negotiations until the American people tired of the war sufficiently to demand that we throw in the towel. So, while this “unwinnable” war dragged on from 1969 until 1973, more than 21,000 Americans died.

Another disturbing revelation is that long before the Saigon government collapsed in 1975, America’s exit policy had already been set. The term was “decent interval.” That meant getting U.S. troops home first, then blaming Democrats and the antiwar movement when Saigon was defeated by the North Vietnamese. With a “decent interval” we could also blame the South Vietnamese for losing “their” war. Nixon and Kissinger used the word “Vietnamization” in conjunction with “peace with honor.”

Nixon’s “Madman” strategy failed. His ruse of preparing to mine Haiphong Harbor and to set SAC B-52 bomber “readiness” exercises and  6th Fleet maneuvers failed to get Moscow sufficiently worried about what we were up to. It was not until 1972 when Nixon authorized Operation Linebacker II, unleashing B-52 bombers over Hanoi, that they decided to sign a peace treaty.

That’s how Nixon  wound up having  his “decent interval” to disengage from the Vietnam War and claim “peace with honor.”