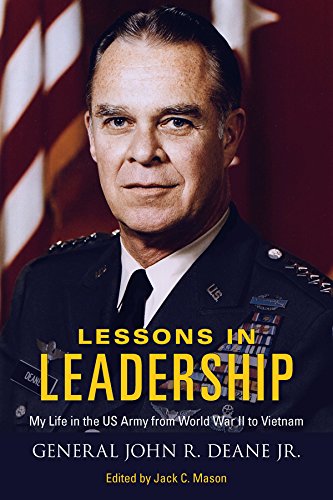 I  believe that Army generals are cut from the same khaki cloth. Young officers find mentors and devotedly follow them until it’s their time to lead; then they collect followers and mentor them. In that way, generals maintain their version of what Kipling called “the thin red line.” Generals live in a world unto themselves.

Deane graduated from West Point in 1942 and served in the Army until 1977. He fought in World War II and in Vietnam. His father was a well-liked major general, a fact that opened many doors for John Junior, a situation he frequently acknowledges.

True to its title, Lessons in Leadership provides guidance from Deane accumulated as a staff officer and a commander who attained four-star rank. He often cites his teachers. For example, Gen. James Gavin taught him, Deane writes, to “inspire people to outdo themselves” and then he tells how he built on that idea. Deane also preaches that “substance is more important than form,” words that should be tattooed on the forearms of PowerPoint-crazed staff officers.

He tells stories in a conversational style that flows from topic to topic. He narrates combat experiences in a nonchalant, nearly emotionless, voice. He underplays them and yet delivers the full impact of what took place.

Deane’s writing allows a reader to experience vicariously what he did and to understand exactly why he did it.  In World War II Deane and his men entered combat in October 1944 and engaged in all-but continuous fighting for two hundred days. He rose to the rank of lieutenant colonel and received many decorations as a battalion commander in the 104th Timberwolves Infantry Division led by Gen. Terry Allen, a boyhood idol who became a friend.

The three generals flew low in helicopters and frequently landed in the field alongside their men in combat. After taking over as the commander of the 173rd Airborne Brigade, Deane jumped with men (first man out the door) in February 1967 during Operation Junction City to form a blocking force for two hundred fifty follow-on helicopters with five thousand soldiers.

The three generals ignored criticism of their unconventional behavior. Each man saw himself as “a soldier’s general” and set positive examples at every opportunity. Deane’s troops called him “Uncle John.”

Deane imparts thought-provoking lessons he learned during that time. Eyewitness accounts from soldiers interviewed by Mason support Deane’s recall of many events.

On Feb. 22, 1967, Gen. Deane led the 2nd Battalion of the 503rd Parachute Infantry out the door of a C-130 north of Tay Ninh City in the first U.S. combat jump since the Korean War, and the only mass jump of the Vietnam War.

Beyond the two wars, Deane commanded forces in Germany, Korea, and the Dominican Republic. He also worked in research, engineering, and force development. Based on these jobs, particularly those in Washington, D.C., he recalls encounters with senior officers and career managers. He explains how to make sound decisions while working with senior people, as well as uncovering weaknesses without getting everybody mad at you.

When you do your job well, he says, you can make enemies. The solution is to do what best meets the objectives of the organization. His discussions of several events in his life read like pages out of Catch 22. A couple of his encounters made me laugh out loud. At the same time, his teaching is priceless.

When describing other men, Deane details not just their actions, but also blends in their personalities and brings them fully to life. He ties together stories, recollections, and rumors to explain controversies about leadership such as Terry Allen’s loss of command of the 1st Infantry Division during World War II. In these passages, his storytelling resembles a Vanity Fair exposé. He ends each account by explaining how it influenced his leadership style and the behavior of his subordinates. He repeatedly credits subordinate commanders for his units’ successes.

With authoritative certainty, Deane categorizes leaders into four groups largely based on a willingness to commit oneself to a task. Category One contains fearless people—beyond a physical sense—who make decisions without fearing personal consequences. Category Two’s people know and feel fear but have a characteristic that drives them onward, such as pride, religion, or family. Category Three is composed of followers of the leaders in the two other categories who need help to conquer their fears. People in Category Four will quit, no matter what happens. These categories apply to civilian as well as military leaders, Deane says.

Credit for the book’s readability must include its editor Jack C. Mason. A few years before his death in 2013 at the age of ninety-four, Deane provided manuscripts to Mason that documented his career. After that, the two men communicated nearly daily.

“When I asked him to explain or expound on something, he replied in detail,” Mason writes. Mason also researched information that broadens Deane’s stories and includes these findings as italicized paragraphs in the text.

A recurring theme is the clash of egos between generals. Deane does not hesitate in naming those he considers worthy of star rank and those who were unworthy. In the latter case, he reduces the image of one general to that of a sobbing infant.

Which is one reason that reading Deane’s book provides more lessons about Army generals than some people might want to know.