The most interesting section of Fighting Shadows in Vietnam: A Combat Memoir (McFarland, 220 pp. $19.99, paper; $8.99, Kindle) describes the U.S. Army’s 1970 invasion of Cambodia as author Michael P. Moynihan, Jr.—who was wounded as an RTO with the 1st Air Cavalry Division—experienced it.

Shortly after graduating from high school, Mickey Moynihan volunteered for the draft to continue his family’s tradition of serving in the military. His father had fought in the Pacific during World War II, and his brother had been a Marine in Nam during the 1968 Tet Offensive.

Five-five and 130 pounds, 19-year-old Moynihan found the physicality of infantry life a challenge beyond expectations. Constantly on patrol, however, he grew accustomed to living in the jungle. He perfectly presents the rigors of infantry life in the Vietnam War with stories about a three-day sweep of Nui Ba Ra (White Virgin Mountain) in search of the enemy while struggling merely to reach the hilltop.

His view of the Cambodia invasion reflects additional struggles. Following what appeared to be last-minute plans, his and another 1st Cav company captured 326 tons of North Vietnamese weapons and supplies. They blew up more than they hauled away. As Moynihan describes the scene, chaos ruled every activity. After being wounded in Cambodia, Moynihan became a waiter in the commanding general’s mess at Phuoc Vinh.

Readers familiar with the Vietnam War might feel bothered by Moynihan’s recitation of information hashed over in innumerable other memoirs. For example, he explains C-rations, C-4 explosives, the P-38 can opener, Claymore mines, and every-day grunt duties.

At the same time, he evaluates relationships between soldiers in his own personalized terms. Moynihan’s insights center on what he learned about people through physically and mentally challenging events. He enjoyed the unity and fellowship that linked his fellow lower-ranking troops.

The death of friends, however, gave him powerful survivor-guilt feelings. In this regard, he experienced what I read as the onset of PTSD when he saw a dead comrade in Cambodia. His reaction: “I felt sick in a way I had never known before. It was an illness of both body and mind—deep sadness, a poisoning of the heart.” 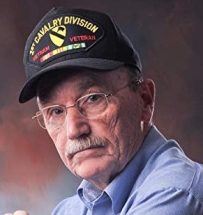 Moynihan righteously complains about officers who considered young infantrymen as interchangeable and expendable. He saw self-serving officers as enemies. As a waiter in the CG’s mess, he gained insight into the chasm that separates officers from each other and the true distance between them and enlisted men.

“War took from me the innocence of youth,” he says, “and led me to dark places. It shaped me into the man I am today.”

Moynihan exudes tremendous pride for his role in the Vietnam War, and does not hesitate to display it through his philosophical thoughts on humanity and warfare.