Robert M. Neer’s Napalm: An American Biography (Harvard University Press, 352 pp., $29.95) hurls the reader into the heart of darkness as he tells the life story of napalm, the incendiary jelled gasoline that was developed in World War II and employed extensively—and sometimes infamously—in the Vietnam War.

The author—a lawyer and historian who teaches at Columbia University—uses in-depth research and straightforward narration to tell the story of napalm. While Neer never condemns anyone, his choice of quotations, information, pictures, and events tells us where he stands on the use of this fearsome weapon.

Lewis Fisher was the man who measured up to the challenge of developing napalm during the early years of World War II. The author tells us that the first successful experiment of napalm took place on July 4, 1942, on a Harvard University soccer field.

Napalm was used very successfully against the Germans and Japanese. To the front-line soldier, napalm was often life-saving and the only way to flush out the enemy. War, Neer reminds us, often brings out the worst as well as the best among those who take part in it. Robert Scheer, a veteran of Okinawa, described his men watching a fleeing Japanese soldier turn into a torch. They spontaneously cheered.

“We cheered that incredibly horrible site, the burning of another human being,” Sheer said. “Whatever the justification, we had become savages, too.”

Precision bombing with napalm proved to be very difficult. The solution turned out to be bombing large areas including the target. The author describes the sustained, ten-day napalm bombing of Tokyo and other large cities. Neer says that the atomic bomb got the press, but napalm did the work leading to Japan’s surrender.

Napalm was used into the Korean War. The burning gel often wiped out hundreds of enemy troops at a time. Once again, to the troops on the front lines, napalm was often a lifesaver. On the other hand, due to area bombing, thousands of civilians also burned to death. Following a large napalm attack, General Douglas MacArthur commented: “After I looked at that wreckage and those thousands of women and children and everything, I vomited.”

Napalm was used extensively in Vietnam. The author says that 388,000 tons of it rained down on Indochina from 1963-73. One pilot explained why the weapon was so successful; to wit: “People have this thing about being burned to death.”

Neer describes in detail how napalm runs took place in the Vietnam War. Oftentimes, after a napalm run, a pilot was given a cold beer while his armaments were replenished, and the plane was back in the air within twenty minutes.

Thanks to television and front-line reporting, Americans saw first hand a lot of the battlefield horror of the war in Vietnam, including the effects of napalm. One battlefield observer, Neer reports, entered a burned-out village where pigs were eating the roasted bodies of human beings.

After the Vietnam War, the napalm heart of darkness continued. Neer explains how billions of dollars have been made through games and movies glamorizing the power of napalm. That moneymaking process continues to this day

A worldwide effort was made to ban the use of napalm. Neer notes that the United States has abstained from most of the voting on making napalm illegal.  Presidents Clinton, Bush, and Obama have had parts in outlawing the use of napalm, but each has insisted on some exceptions for its future use.

This book is well-written and should be read, but I found it difficult on many emotional levels even though it deepened my compassion for my fellow human beings. The book clearly shows why we must never give up the search for better ways to resolve conflict. 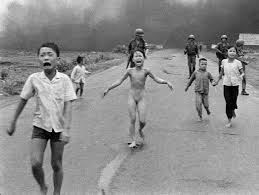 The final pages of the book contain profound thoughts by Kim Phuc, providing the only ray of light I found in the text. Kim Phuc is the famed “girl in the photograph,” captured as a nine-year-old running naked and screaming from her napalmed village. The photo made international news during the Vietnam War and became a catalyst for antiwar protests.

Kim Phuc explains how she overcame her anger, hatred, and pain by developing love and forgiveness for the bombers. “Faith and forgiveness,” she says, “are much more powerful than napalm could ever be.”

I cried when I read that. I also prayed that someday I will wake up and realize this book was only a work of fiction.