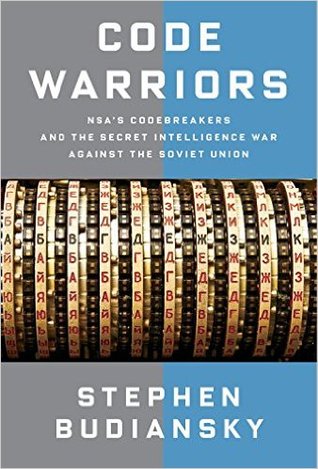 These days we apply different terms to an important game heroes and villains play: Leaking. Hacking. Phishing. Today’s players are Edward Snowden, Julian Assange, numerous Russians, and anybody else with a computer who searches deeply into the files of others—in other words, spies at work. Back in the day, they called it espionage.

One of the world’s most interesting espionage battles took place during the Cold War—from the end of World War II to the 1991 collapse of the Soviet Union. Stephen Budiansky recreates this period in Code Warriors: NSA’s Codebreakers and the Secret Intelligence War against the Soviet Union (Knopf, 410 pp., $30, hardcover; $14.99, Kindle).

The story extends back to before World War II and describes America’s espionage tactics that led to the 1952 creation of the National Security Agency, which in turn led to crypt-analysis techniques capable of deciphering “unbreakable” codes.

An historian and lecturer, Budiansky has written fourteen books about military and intelligence history, science, and the natural world. In this highly informative book Budiansky tells less than a complete story because, as he explains, NSA “continues to this day to be extremely chary of revealing any details of its successes against Soviet cryptology.” In writing Code Warriors, Budiansky primarily relied on archival sources and document collections.

Nevertheless, Budiansky—the former national security correspondent and foreign editor at U.S. News & World Report—presents fresh perspectives on NSA triumphs and failures against Germany and Japan, Korea, Vietnam, and, most of all, the Soviet Union. He shows how NSA evolved into an organization in which “what had been acceptable in wartime but anathema in practice became the norm for peacetime, too.” While reading about the tactics NAS used on foes and friends, foreign and domestic, I vacillated between love and hate for the agency and its leaders.

Budiansky’s summation of the early years of the Vietnam War could dredge up unpleasant memories for veterans of that conflict. He cites many cases of American “overconfidence” and “disdain for the intelligence capabilities of the enemy,” along with falsification and concealment of the truth by NSA. Much of the latter aimed to appease the White House and established precedents that eventually were used to justify going to war in Iraq, he concludes.

The scientific problems of code breaking are inseparable from politics, Budiansky says, but his accounts “give a sense of what the code breakers were up against without assuming any special knowledge of cryptology or mathematics on the part of the reader.”

Budiansky does not ignore aficionados of code breaking, however. His five appendixes challenge the mind:

When I reached that point in the book, I signaled a time out that is still in effect.