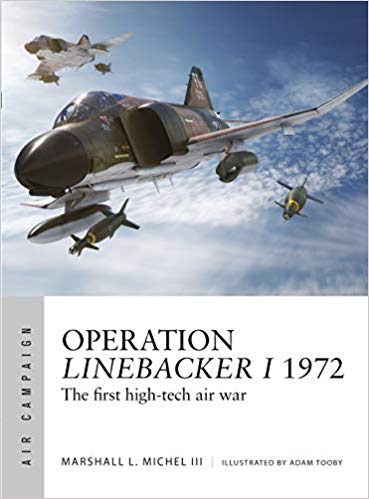 In the spring of 1972, the North Vietnamese launched a three-pronged attack against South Vietnam: from the Demilitarized Zone, the Central Highlands, and Cambodia. With few Americans remaining in country working primarily as advisers while Nixon’s Vietnamization was in full swing, the South Vietnamese were expected to protect themselves. That appeared impossible in face of the North’s disproportionate number of personnel, tanks, and artillery.

Linebacker I and II coincided with Michel’s Air Force career. From 1970-73, he flew 321 combat missions as part of both campaigns. Last year he wrote Operation Linebacker II 1972: The B-52s Are Sent to Hanoi, which is an excellent companion to this book.  https://vvabooks.wordpress.com/2018/10/04/operation-linebacker-ii-1972-by-marshall-l-michel-iii/

In this look at Linebacker I Michel provides a detailed account of political and military actions prior to and during the bombing operation, including explaining Nixon’s changing diplomacy. Linebacker I concentrated on interdicting North Vietnamese supply lines, much like Rolling Thunder had done from 1965-68. Linebacker I had broader approval to target airfields, SAM sites, and GCI radars than Rolling Thunder did.

To buttress his claim that this was the start of “an air power revolution,” Michel describes the use of new equipment on Linebacker I missions from April through October 1972.

He calls precision guided munitions (PGM) “the most important Air Force weapon in the campaign.” These 2,000-pound smart bombs either were laser guided (LGB) by a designator in the back seat of an F-4 or they were electro-optically guided (EOGB) by a Pave Knife external pod.

Delivering LGBs required two aircraft: one to lase and one to bomb. Pave Knife allowed an aircraft to deliver and track its own EOGBs, as well as those dropped by the rest of an attacking flight. Full-page illustrations in the book help explain this maneuver and others tactics, such as the mining of Haiphong Harbor.

Smart bombs were not new in 1972. When I flew with Spectre in 1970, our F-4 escorts occasionally carried LGBs, which our slowly orbiting gunship targeted with lasers against antiaircraft sites or road intersections in the relative safety of Laos. The advantage enjoyed with smart bombs during Linebacker I occurred from marrying them to sophisticated electronic gear that permitted aircrews to guide their munitions while flying at high speeds in extremely hostile environments.

During Linebacker I, chaff received fresh life. Chaff bombs established corridors one hundred miles long, allowing aircraft in these paths to become invisible to equipment on the ground.

Improved technology did not solve every problem, though, according to Michel. The USAF and Navy used different air-to-air tactics, which created dissent, he says. Navy pilots who had trained under the Topgun program scored a high victory ratio over MiGs, while USAF crews suffered losses as a result of poor tactical maneuvers. Michel show how MiG domination against the Air Force pilots brought about the creation of the Red Flag training program and modernized tactics.

Along with technological gains, command-and-control changes further increased air power effectiveness. B-52s delivered their “incredible number of bombs day or night in any weather conditions,” as Michel puts it, and “changed targets quickly to meet the ground tactical situation very close to allied troops.” As a result of these capabilities, the 200 B-52s from Guam and Thailand concentrated their strikes on close air support in South Vietnam during Linebacker I. 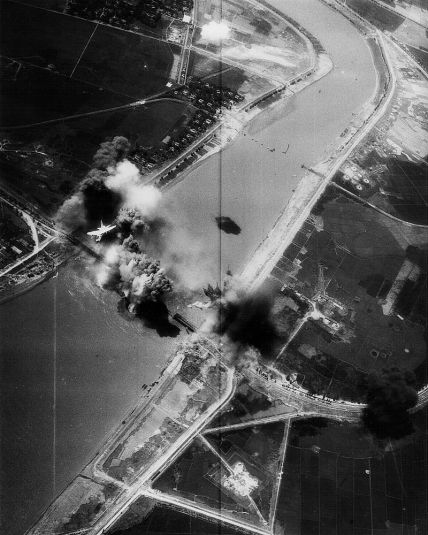 Bombing a bridge in North Vietnam, May 1972

On the ground, the North Vietnamese improved defenses by moving SA-2 launch sites closer to the DMZ and employing shoulder-launched SA-7s on the battlefields.

From start to finish, Michel repeatedly lauds the less glamorous C-130 combat support sorties that kept South Vietnamese forces supplied at An Loc and Kontum. In conclusion, he cites an over dependency by the ARVN on American air power, a point proved when North Vietnam again invaded the South in 1975. The ARVN “collapsed,” he says, “ending the conflict once and for all.”

Michel excels as a military historian because he impartially presents well-researched views of observers and participants from both sides of the war.