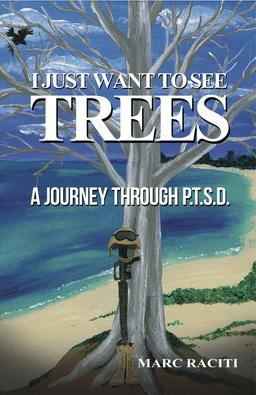 Marc Raciti wanted to commit suicide but could not make himself do it. Instead, he opted for “passive suicide” by repeatedly volunteering for deployments to hot spots where he hoped to “die with dignity” in “support of the Global War on Terror.” During his 1989-2013 Army career, Raciti, a retired U.S. Army Major, survived five deployments to Kosovo, Iraq, and on the African continent while his life turned increasingly unbearable.

As an Army Physician Assistant who treated the dying and wounded, Raciti suffered guilt feelings for surviving while troops around him died or disappeared into the medical network without him ever knowing their fate.

“I had cared for the wounded, mourned for the dead and consoled the survivors to the point that I was numb,” he says.

In I Just Want to See Trees: A Journey Through P.T.S.D. (Jones Media, 160 pp. $9.99, paper; $5.99, Kindle), Raciti tells the story of personal agony that became PTSD during his twenty-four year Army career. He wrote the book in hope that telling how he dealt with his disorder might serve as a lesson for others with PTSD.

This memoir should interest Vietnam War veterans because of the guidance and hope it offers for those suffering from trauma generated by war. In presenting what he experienced, Raciti does not dwell on the gore and horror that produced his recurring guilt and nightmares. Instead, he concentrates on his post-war misbehavior, which created what he calls “a wide trail of severed relationships.”

Sharing hard-earned methods for coping with “constant anxiety and paranoia,” Raciti tells how he conquered “survivor’s guilt, shame, and feeling unworthy of life.”

The book ends happily. Raciti learns to control his PTSD with help from an enlightened wife, a caring counselor, and a service dog.

“PTSD is a chronic condition and medication only manages part of it,” he says. “Therapy manages the rest.”