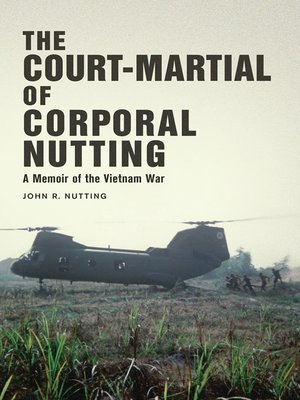 John R. Nutting wrote The Court Martial of Corporal Nutting: A Memoir of the Vietnam War (Skyhorse, 194 pp., $24.95, hardcover; $13.99, Kindle) with one purpose in mind: to set the record straight about his life as a Marine infantryman.

Nutting’s book is an outstanding account of combat as fought by the Marine Corps north of Dong Ha during 1966-67. Nutting joined the Marines straight out of a small-town Idaho high school because his family had a military heritage extending back to the American Revolution.

Leaving home for the first time, Nutting experienced a long list of “firsts,” including his first airplane ride and his first sauna/massage. His youthful wonderment and delight pervaded every new experience. His heart was pure.

At the same time, en route to Vietnam, he recognized that every new experience might also be his last.This part of his book easily could have been titled “Prelude to Disillusionment.”

Serving in the 2nd Battalion, 3rd Marine Division in Vietnam, he saw people die in ways that easily could have shattered many minds. Several of the casualties were his closest friends. Nutting himself suffered shrapnel wounds and other physical injuries, twice spending time on hospital ships. Yet he endured.

He introduced me to the term “battlefield gratitude,” which he explains as “more than once having the unsettling feeling of watching a medevac disappear over the tree line, sorry for the guys in the bags and feeling so grateful that it wasn’t me.”

These kinds of mind-numbing events had to be filtered: “I could feel only so much, only allow in so much,” he writes.

Best of all, Nutting remembered his fellow Marines by name and tells extraordinary stories about them. His accounts too often end with a pronouncement of how and when a Marine was killed.

As a coping tool while in Vietnam, Nutting occasionally smoked marijuana with close friends hidden in a bunker between missions,and on R&R. He never used drugs in the field. Back in California, he was assigned to laboriously produce his unit’s diary. But on weekends he.succumbed to the vibrancy of the counterculture, “sliding into oblivion” with too much Scientology, wine, and reefer.

Nutting’s brief association with two Marines on the verge of dishonorable discharges resulted in his court-martial for marijuana possession. The “green vegetable residue” found in Nutting’s possession was “so miniscule it could not be weighed,” according to two special agents who testified for the prosecution.

All of this happened when commanders saw marijuana as the ultimate evil. Nutting waited six months through two nerve-racking delays before a board found him not guilty of all charges. Two weeks later his enlistment ended and he received an honorable discharge.

Letters to his parents supplement Nutting’s narrative. To them, he wrote factual accounts of military shortcomings. Subsequently, his influential father used the letters to convince legislators to bring about changes such as rushing night-vision sniper scopes to Marine units.

Nutting’s letters also complained that search-and-destroy missions added up to little more than “the wasting of lives on both sides fighting to take the same areas time after time.” He challenged Secretary of Defense Robert S. McNamara’s strategy by writing, “I would rather die storming Hanoi than watch my buddies be picked off one by one.” That letter stirred a state representative to apologize for the McNamara’s “sheer folly.”

John Nutting writes prose that flows and he can turn a phrase, both dramatically and humorously. After seventeen days without a bath, for example, he describes himself as smelling “like an old wino’s socks.” He does not spend time explaining the obvious: When Nutting uses military vernacular, he footnotes its meaning in a few words and continues the story.

If you liked Dominick Yezzo’s A G.I.’s Vietnam Diary, you will definitely enjoy Nutting’s book. Nutting, like Yezzo, projects a youthful exuberance tempered by the realities of combat. And—as Yezzo does—he shares details of his fascination with women.