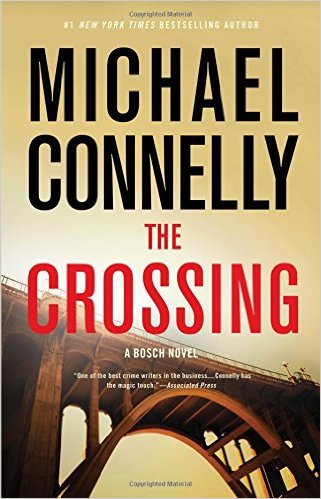 It’s been a year since Michael Connelly‘s nineteenth Harry Bosch detective procedural, The Burning Room, came out. I’ve been a giant fan of Connelly and his Bosch novels since the first one, Black Echo, burst on the scene in 1992, getting great reviews and garnering big-time sales.

It’s always a special treat to read these fast-paced, cleverly plotted thrillers featuring Vietnam veteran Harry Bosch, the iconoclastic LAPD homicide detective who had a rough childhood and who served as a tunnel rat in the Vietnam War. Bosch’s service in the war is a theme in several of the books, and gets mentioned often in others. Lately, as Bosch has reached retirement age, his war service is only touched upon. And that’s as it should be.

In The Crossing (Little Brown, 400 pp., $28), which came out early in November and became a No. 1 bestseller, the war is mentioned only once. It comes when Harry is contemplating his worth as a father (something he does often). He ruminates on the fact that he’d never taken his teenaged daughter camping. “He had never been taken camping,” Connelly writes, “unless his time sleeping in tents and holes in Vietnam counted.”

While Harry’s Vietnam War service is not central to the book, Harry Bosch certainly is. His good and not-so-good traits that we have come to know over the years are on full display. On the good side: He is a relentless seeker of justice for those who have been murdered or harmed by criminals. He is a smart, brilliant, hard-driving crime solver. He has little use for ticket-punching, self-serving LAPD bureaucrats and politicians. He is a dedicated, if oftentimes baffled, single father of a teenaged girl. He is a survivor who skillfully has come through more than his share of post-war violent confrontations with criminals.

On the not-so-good side: His relentlessness often leads to serious rule-breaking. His disgust with the LAPD lifers often leads him into personal trouble–and trouble for the cops he works with. And lately, he makes a few crucial mistakes as he goes about his crime-solving.

In The Crossing—which I happily just binge-read—Bosch has just retired and reluctantly takes a temporary job with his half brother, Mickey Haller. He’s the flamboyant “Lincoln Lawyer,” who loves taking on difficult cases–and craves the media spotlight.

Haller’s representing a former gang member who is in jail for horribly raping and murdering a woman. The evidence looks extremely solid. Haller doesn’t care; he believes the guy is innocent and is ready to use any legal technicality to help his case. Bosch does care—and only agrees to investigate the case after he’s convinced the client is innocent.

Connelly spins out his usual convoluted but extremely clever plot flawlessly. Even though you know who the bad guys are early on, the pages still keep turning as Connelly puts one roadblock after another in front of Harry and things get exciting and tense as the book moves toward its inevitable violent conclusion.

If you like rapid reading police procedures that are a cut above in literary merit, you can’t go wrong with The Crossing–or any of the Harry Bosch books.