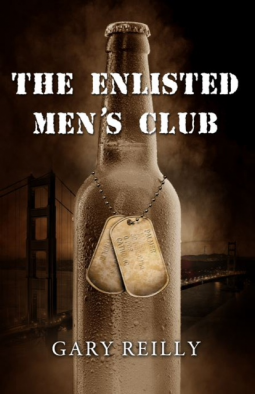 In my review of Gary Reilly’s five Asphalt Warrior novels I lamented that his unpublished books based on his tour of duty in Vietnam still languished in his steamer trunk. I am happy to announce that the first of these novels—The Enlisted Men’s Club (Running Meter Press, 372 pp., $18.95, paper)—is now in print. I wish Gary Reilly had not chosen to stash these novels to be published until after his death, because I would have liked for him to read the positive reviews that his books are getting.

I raved about how good the five Asphalt Warrior novels were. The Enlisted Men’s Club is as good, or better. It is a darker novel for sure, but with plenty of humor. All we have been told about Reilly’s death is that it was caused by cancer. Now that I am reading his series of military novels, wonder if he died of Agent Orange-related cancer.

Reilly was drafted into the Army, and served a year in Vietnam as an MP. The Enlisted Men’s Club is filled with the dry, sardonic observations that made his first five books a delight to read. The U. S. Army during the Vietnam War was made for an observer like Gary Reilly, and his doppelganger main character, Private Palmer.

The nature of modern war gets close scrutiny in this book; Palmer is mostly in San Francisco stationed at The Presidio awaiting orders for Vietnam, what Palmer calls “these times which are moving fast but without momentum toward the war in Vietnam.”

The war hangs heavy over every event in this novel, like the damp, thick fog that is endemic to The Presidio and the entire San Francisco Bay area. Reilly’s considerable skill with narrative makes this doom-laden book always engrossing. ‘

Even though Palmer is assured countless times that “MP’s don’t die in Vietnam,” he is convinced that death will be his fate.

Palmer takes great pleasure in being an Army MP. It’s his dream job. As Reilly puts it: “He likes being told what to do like a mindless puppet, as the hippies say, and going where somebody points him, and doing what they tell him to do.”

I enjoyed that aspect of military life myself. On the other hand, “Palmer can see quite clearly that Vietnam is going to be a crock of shit.” He got that right.

This novel is free of the usual clichés that are so wearisome in novels and memoirs written by Vietnam veterans. One of my favorite scenes in the book comes near the end when Palmer is readying himself to be transported to Vietnam. He is approached by a seventeen-year-old barefoot hippy girl with stringy but clean hair. She invites him to join an antiwar rally. He informs her that he can’t as he will be in Vietnam by then.  She does not call him names or spit on him. She is sweet and saddened by this announcement.

Private Palmer drinks a lot of beer, and spends a lot of time conniving to dodge “shit details” which he hates, as did all of us who served in the Army—things like sweeping already clean floors and polishing already surgically clean toilets.

The publisher calls Reilly a “master story teller,” and that fact is even more apparent in this novel than in the previous five. I highly recommend The Enlisted Men’s Club to those who wish to enjoy a book about the last weeks before a young man ends up in Vietnam, convinced he will die there.

The book I am really looking forward to is his next one, the in-country Vietnam War novel that will provide Reilly the best material for his sardonic wit.